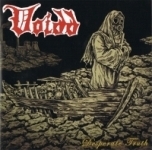 I remember…I remember now… there was a time when in Japan many Death Metal bands were spawning… I remember many… NECROPHILE, SIGH, TRANSGRESSOR, GIBBED and yes… VOIDD… they all had a similar Death Metal approach, and I have always felt those bands were sounding more American than European… in the case of VOIDD I remember a band sounding like early DEATH / MASSACRE with many SLAYER touches here and there… then again the band went completely into obscurity and not exactly due to disbanding, but due to a very radical style change… a very sad thing that has passed on to many bands in the past… no I will never take it as they grew out of Death Metal… if you feel the time is over, then dammit, change the band name… it was easy to change style but not the band name? And back in the day it was even more frustrating as sometimes a band you had with a very good album suddenly turns to garbage in the very next one… leaving my anger aside, this nice and massive 2 CD collection, presents what is actually the best material from this band when they were playing good Death Metal. Included are their 1990, 1991 and 1992 demos as well as the very good debut album from 1993 “Desperate Truth”. Let’s face it, there was very few originality in the music, although at least for me no matter how close the Japanese bands sounded to their American idols there was a certain something that could be hear adding a very special feeling to the overall result… and even at that time most recordings coming from the land of the rising sun were obviously very well done… then something happened… their second album was a lot more groove orientated and sounded more Hardcore although still retaining a good dose of Death Metal edge… that is always wrong in my book and few bands have survived with that kind of influence… so it comes as no surprise that later albums were more Hardcore / Punk orientated until all traces of Death Metal sound are left rotting in the past. Their music style change reminds me that of XYSMA, CONVULSE, MASSACRA and so on, that started very good and then, completely changed for some other musical scene. So, this one compilation is an historic piece that shows the fate that many good Death Metal bands faced back then… the damned crisis identity that took us many promising bands… so let it be. As it is and if you find this at a god price, it is a good addition for those longing for death in the 90s… obviously not the best of the lost jewels of the time, but quite competent. www.myspace.com/dokurockvoidd, www.areadeath.net