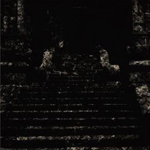 VORAGE is a duo from the Midlands in the United Kingdom and play a blackend but ambient version of Death Metal. After a demo released in the last year only on cassette, the CD version now comes via Helltrasher Productions, who want to give a wider audience the chance, to listen to the dark material. The three tracks are a mixture of classic Death Metal mixed with some Black Metal influences, an ugly bastard, which gets more and more popular nowadays, as bands do not care for strict directions anymore and just simply write hellish music, like the classic bands did in the late 80s and early 90s. The production is raw and unpolished but no garage sound as some Black Metal bands like to use. The guitars are raw and distorted, the drumming is fast and raw and reminds me a bit of a Black Metal version of MORBID ANGEL. Dark and raw grunts guide the listener through the three hellish tracks. The lead guitar work is very fine and all tracks are on a high technical level. Fans of raw Death / Black Metal in the vein of newcomers like RITUAL CHAMBER or simply old school Death Metal fans, who hunger for some rawer stuff, should give this material a listen. Check the band out via www.facebook.com/vorageband or their label at www.hellthrasher.com