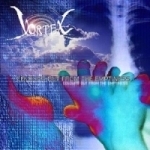 VORTEX
Colours Out From The Emptiness
(Psychic Scream Entertainment)
46:45min

Wow, what a blast of a record!!! I had the lucky opportunity to listen to this Jananese act VORTEX for the first time in my life in some Tokyo restaurant when this record was still in an unmixed shape but I was already impressed by the great playing abilities and power created by these guys back then!!! However, "Colours Out From The Emptiness" is (as far as I’m aware of), the band’s debut album and it’s been released by Psychic Scream Entertainment from Malaysia. In case you are into bands like CYNIC, DEATH and early GORGUTS, you will just have to utterly check these guys out, because VORTEX deliver a fair mixture of the best elements of all those mentioned bands on this all the way great sounding album. Sure, some of you could miss the "easy listen" impression with some of the lengthy 8 songs on here, but I guess this style of extreme Metal is done exclusively for a certain part of the scene after all?! Some of the riffs and atmospheres clearly traces back to CYNIC at the pre-"Focus" demo period, whereas the vocals remind you a bit on PESTILENCE’s "Testimony…" album and the overall vibe in sweet sounding and super clean played guitar passages is clearly influenced by Chuck Schuldiner and his boys ("Human", "Individual…" and "Symbolic") . All in all, an awesome record with plenty technical highlights and I suppose that if VORTEX would put some further effort into more direct and remarkable songwriting structures, they could develop into a really great leading force for the progressive Death Metal movements nowadays, seeing that all the bands that apparently influenced them have (sadly!) disappeared already! Very heavy start… Label Website: http://psychicscream.com, Band Website: http://members.tripod.co.jp/vortex_/