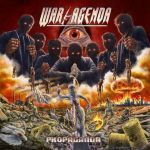 Germany’s WAR AGENDA are a fine mix of old school Thrash with a cleanly produced sound. Their second album “Propaganda” is a polished album by a band that sounds as experienced as any Thrash band from the beginning of the genre. Including an array of interesting-named members (Moustafa Troll – vocals, Ingo and Raafat – guitars, Marcel – bass and Hamdi – drums), the band tackles some worldwide issues in their own metallic way. ‘Sounds Of Oppression’ is an acoustic intro segueing into ‘Propaganda’ that blasts forward with classic Thrash riffs and vocals that sound like a diseased hobo on quaaludes, but in a good way. The slick production is definitely a benefit to the band as it captures the power and energy without being too glossy. ‘Plan B’ rages into a wall of destruction which’ll be sure to cause a swirling, pummeling pit at the next live show. After another acoustic beginning, ‘Human Race’ features a fucking erratic, twitching guitar / drum duel that leads to an amorphous Metal headbanger. ‘United In Hypocrisy’ flies by at lightspeed as ‘Silence Of Justice’ highlights some nice bass-playing which eventually, gently evolves into a mid-tempo track before speeding up just a tad with simple, yet effective riffs. ‘Apartheid’ sounds like a 90s Metal anthem which stomps and crushes along its way. WAR AGENDA doesn’t let up with ‘Chaos Invasion’, ‘War Of Nations’ or ‘Killer Disease’. Then, at the end, there’s ‘Child Of Dreams’, which is fine until midway through when there’s some sappy spoken word nonsense that reminds me of Fabio trying to sweet-talk a naive schoolgirl. So yeah… maybe this track could’ve been left off. Or maybe the spoken part could’ve just been removed as the rest of the song is quite satisfying. “Propaganda” is a damn energetic and satisfying album until the last track. If the band can skip over this in their live shows, they’re sure to have a fantastic turnout of bloodied, black-eyed moshers having the time of their lives. For more info, check out www.facebook.com/waragenda, www.facebook.com/greatdanerecords