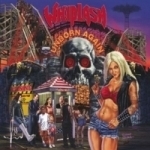 WHIPLASH went through many problems in their rather long career, having started as a real promising Thrash act, then lost part of their momentum following the addition of a full part vocalist, then breaking up, reforming and releasing two albums that had almost nothing in common with WHIPLASH… And finally re-reforming again with the original line-up for a rather enjoyable short comeback. Now this is their third comeback featuring Tony Portaro and Joey Cangelosi plus Rich Day on bass (it’s interesting to know that Rich was also in DEATH CORPS back in the day with Joey). So, in these days (where Thrash makes a rather big return on the scene), one would have expected nothing but pure Power Thrashing Death à la “Power And Pain” for this record – but in the end, it’s nothing like this. Strangely enough, mainman T. Portaro has preferred to pen mid tempo tunes with some groove (oh that damn word!) incorporated… The result? A terrible lack of intensity, especially when it comes from a band like WHIPLASH! There’s almost like no songs that manage to catch the fury captured on their first three albums…’Feeding Frenzy’ and ‘Pitbulls In The Playground’ being the only two quite raging tunes here yet it’s clear that ‘Pitbulls…’ is not a song that will become a long time classic… The main riff being not worked on deeply enough. Those damn insane rolls all over the place courtesy of Cangelosi are very few and Tony’s voice is really tame comparing to what it once was (I think it’s pretty obvious that he isn’t able to pull it off anymore in that aggressive old style these days and therefore the vocals completely ruin the whole album – Frank). Now the music itself – for the most part – is rather good (if you let the crushing element apart), like ‘Swallow Slaughter’, ‘Fight Or Flight’, ‘Parade On Two Legs’ (a rather interesting instrumental)… Even the ‘I’ve Got The Fire’ cover doesn’t move you that much compared to the MAIDEN version for example that they executed in the early ’80s… it says quite a lot on how average some of the stuff on here is. So, there was a lot of hype surrounding this release before it got finally released, and it certainly didn’t deserve it. If you like real Thrash – or just intense Metal, then go for SACRIFICE or ARTILLERY anyday over this. www.myspace.com/whiplashusa, www.pulverised.net