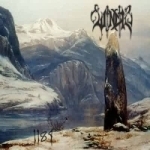 Nice short title for a CD, but what does it mean? Probably it’s the year 1184, the band comes from Norway… any ideas? I guess so, but let’s look it up. In 1184, Sverrir became king of Norway by defeating Magnus V. He drove out the clergy and repudiated thereligious reforms and privileges. Therefore he was excommunicated. Yeah, I guess I’m interpreting the title correctly. So of course what WINDIR play is melodic, yet aggressive Pagan Black Metal. They’re a real band by now as Valfar recruited the members of ULCUS for his formerly one-man-project. The first song ‘Todeswalzer’ is in German, don’t ask me why, it’s not a waltz, either… nevertheless, it’s a good song, like most of the others, so if you’re into Black Metal: check it out. By the way, great cover painting: a lake in the snowy mountains. As there probably won’t be a vinyl, I’d suggest to sell this album with a big copy of this painting, it really looks majestic!