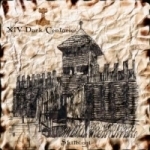 I was never fanatic about that “heathen” thing from proud Thuringia, and it was due to one reason: the music! Of course, a sentence like heathen Black Metal was ever a paradoxum per excellence to me, too. But the music: most of the time it was nothing but ordinary lala, more than often sounding too nice, without any evil or dark atmosphere! The playing of the guitars was more like a usual drinking instrumental done by happy and fat Vikings; the voices worse than of any drunken bard. And even if you won’t believe me, in the case of XIV DARK CENTURIES it is the same. Your praised band simply doesn’t impress me. It’s just boring to me, like 99,99 % of all other bands coming from that genre. All the guys that think drinking honey-wine might be Metal and makes them coming closer to their ancient forefathers: this is music for you, you will like it and you can buy it. For all the ones that think Metal has to be dark: try to escape the hype. www.pervertedtaste.de