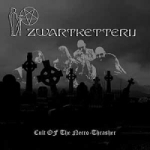 Urgh, due to the name (now I know it means Black Heresy) and rather dumb (in my opinion) title I expected this to be a mediocre / weak retro thing… well, the album definitely is retro (and seems to be somewhat tongue-in-cheek) but it is not weak, hehe. To make it short, the band plays a quite happening brand of Black / Thrash Metal, heavily leaning towards the “Thrash” side, in this case rather influenced by the heydays of the German wave. Actually, some raspy vocals are the aspect which is most reminiscent of Black Metal. On top of that, you also get some more classically styled Heavy Metal vocals which tend to go in the clear / dirty direction of, let’s say Udo Dirkschneider… there are even some uh-ah choirs and high pitched screams! I am not sure if “authentic” would be the right term to describe this but I have to say that the songs are well-written and clearly competently played Thrash songs radiating lots of eighties Metal feeling with some blackish vibes and full of drive. Some epic parts can be found and solos are plenty as well. With lines like “Lick my Chainsaw, Bitch!” one could place ZWARTKETTERIJ in a row with BARBATOS and SCEPTER, at least attitude-wise as musically, the band is more versatile, energetic and, dare I say, thought-out than those two Metal commandos. Ok, this review may not sound too convincing but the record itself sounds convincing, meaning it all works out surprisingly well (I would like to see that band on a stage!). The bottomline is that ZWARTKETTERIJ have come up with a strongly produced album full with powerful heavy Thrash Metal songs with some contemporary edges and lots of Metal melodies, paying homage to the eighties but in a dedicated way. With dedicated I mean that they actually managed to come across with something on their own, of course the influences can be detected. I guess the band will hate me for the comparison but does anybody remember the Norwegian project DESEKRATOR and their record “Metal For Demons”? Well, imagine that but place the emphasis less on the comical / nostalgia / fun part but on the music part instead and you are bit closer to what ZWARTKETTERIJ deliver. Maybe I should have just quoted the band’s motto: Hail the 80s Metal Spirit! Denim and Leather, Bullets and Spikes!! Fuck the Church!! Hail Satan!! Nothing to add… apart from beer! www.zwartketterij.nl, www.myspace.com/zwartketterij