Finnish CONCRETE WINDS rose out of the ashes of VORUM and their debut release “Primitive Force” (which was released back in 2019 via Sepulchral Voice Records) is one of the most uncompromising and relentless releases in the Thrash / Black / Death Metal scene for quite some time. The following interview with the band is already a bit older and was originally featured in issue # 7 of Bulgaria’s TEROZIN zine (thanks Medarov!), but since nothing new has been released from CONCRETE WINDS ever since, it’s still worth reading…

Let’s start with the boring part, as CONCRETE WINDS is a new name, but getting good amount of recognition lately – who are involved, what was the main idea and who came up with the name? Also, how would you describe your noise to a total stranger?
“CONCRETE WINDS consists of PJ and Mikko and the name is taken from a line from the title track on the “Current Mouth” EP. The audio terror we abominate is best described as aggressive noise torment.” 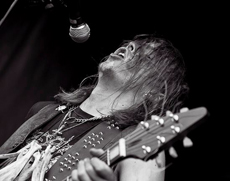 VORUM is dead, long live CONCRETE WINDS! But before falling totally in their dark domains, I will take you a little back as I am huge fan of VORUM’s “Current Mouth” and “Poisoned Void”. Until I heard CONCRETE WINDS, I could hardly believe you could pull off such savage recording as VORUM’s latest EP, so why did VORUM called it quits? What was the reason for leaving this moniker?
“Not going to go into any details about this, it just had to be this way. Some things happened that led to other stuff and in the end everyone just had to accept the inevitable.”

Looking at your old recordings with VORUM, what do you think is the main difference with CONCRETE WINDS? Where lays the progression? Or the regression, hah… what do you think are the main differences with the latest VORUM outputs?
“We’ve always strived to make faster, harsher, more chaotic noise torment, so it’s a natural progression really. We do what we’re capable of doing at the time and a bit above that and of course you develop the more you play over the years, so that combined with our primal iron will to make noise torment at the edge of our level, is one reason why our creations sound / feel so intense.” 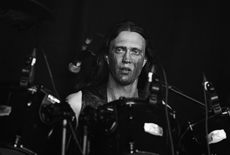 CONCRETE WINDS arose with not much warning, kicking directly with an album, this time you didn’t start with a demo tape, but went directly for a full-length. Is this intentional? What were your activities between 2015 and 2019? I guess some of the CONCRETE WINDS songs were born in that period of time?
“It was intentional, yes. In that time period the seeds of what would become “Primitive Force” were planted and of course we were touring, playing gigs and writing music with our other projects that we’re involved in.”

“Primitive Force” is a fuckin’ brutal, relentless manifest of demonism! Short and punching, it has no boring part or riff. What were your aims in that direction? Do you think it managed to reach levels of intensity, which were not possible for VORUM? What visions do you try to procreate?
“We’re the same ones that did the VORUM stuff, so as we said before it’s just natural progression. We aim to make more intense terror every time we do a record, and this is what “Primitive Force” sounds like. As long as we do it, it will always be intense aggressive noise torment with abominable visions of never ending destruction.” 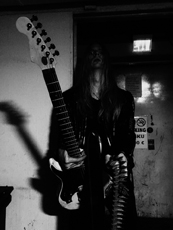 What was the process of the creation of the songs? Do you think CONCRETE WINDS works fine as a duo and will it remain that way? Where did you record the album? It has a raw, 90s punch à la ANGELCORPSE, KRISIUN, MORBID ANGEL…
“A lot of the foundations of the songs were done separately, sending samples back and forth and then we finished the songs together at the rehearsal place. CONCRETE WINDS works extremely well as a duo and the core will remain that way, but live we have enlisted a real savage on razor strings: Mika (ex – OBSCURE BURIAL). We recorded the record with Chris “Mersus” Menning in Solingen, Germany.”

Sepulchral Voice is a respectable label releasing quality over quantity, where did the connection come from? Are you happy with the work, as I must say the wax sounds awesome and the layout looks primitive! What was the feedback and are you happy with the final result?
“All hail to Sepulchral Voice, a fantastic label! They released the “Current Mouth” EP and when CONCRETE WINDS came alive it was just obvious that we should talk to them about releasing “Primitive Force”. The final result was exactly what we were looking for and we’ve had mostly positive feedback. Ended up on a bunch of top of the year lists, but of course there will always be those on the other side, no denying that, but they should just beware for things to come.” 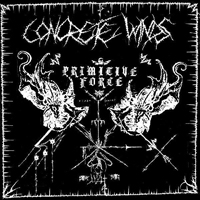 In some of the songs (‘Dissi-Dent Mu-Ti-La-Torrr’!!!) you announce the songs in the beginning, hah… was that decision spontaneous during the recording? Also, do you think CONCRETE WINDS will ever record a slow song?
“Announcing the songs on a record was an idea that had been cooking for a while and now we had the opportunity to try it out and it ended up sounding great. It depends on how one defines a slow song, but in terms of chaos and bpm, slow songs do not exist in aggressive noise torment.”

Do you have any plans to play live and how do you imagine such event? In that same matter, do you plan to continue as a two-piece on recordings and stage?
“We’ve so far done two shows here in Finland and they’ve been great. As we said before the core will remain a duo, but live we are a three-piece with Mika on second guitar.”

The Åland island seems a quite peaceful place for such monstrosities like CONCRETE WINDS / VORUM. How is life there for a Metalhead? Do you have enough places to hang-out, bars, music shops, etc… or is it maybe a deadend for such stuff? Do you think such surrounding could reflect your music in any ways? 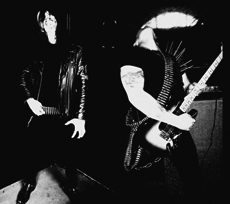 “At the time when we founded VORUM there wasn’t a scene on Åland and there’s probably never been something of a Death Metal scene there. We did our own stuff and concentrated on that. Our main hang out was our rehearsal place that also was a bar where some great gigs were organized. That environment did of course reflect at the time when everyone lived on the islands, but nowadays we do not live there anymore. Mikko hasn’t lived there for over 10 years for example, so it doesn’t reflect so much, but we are two Finnish islanders in the core and always will be, so the influence will be there deep somewhere. And then again CONCRETE WINDS is its own entity in another stage of our lives so the influences come from far and wide.”

Moving away to the main land, I have always considered Finland a superior country for Death Metal (even more than Sweden, but that’s another story…). But, it is always interesting to hear a point of view from an insider… Do you think the Death Metal scene in Finland still lives up to its old glory? I somehow feel CONCRETE WINDS does not quite fit in haha… to that slower doomy kind of Death like CONVULSE, ABHORRENCE, DEMIGOD… and the countless new bands. Still, in your opinion which are the most impressive Finnish Death Metal recordings lately and why?
“The old days are gone and nowadays the scene is different but thriving. Considering CONCRETE WINDS not fitting in is probably because we’ve never considered CONCRETE WINDS or past projects to be Finnish or Swedish Death Metal and we do not have time to doom. Lately I haven’t been listening to any new Finnish bands or releases, so I can’t answer that question unfortunately. Surely there’ve been some releases but can’t say right now really.”

In such age where everyone has equal chance to get exposed through virtual platforms, do you think a new Death Metal band could be interesting with something outside the usual circle of die hard fans? Do you think everything is already said and done in the genre? Do you care at all to what kind of audience CONCRETE WINDS will appeal? 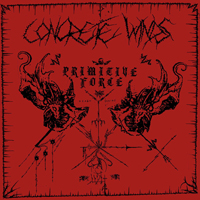 “Yes, for sure. You reach all kinds of different people nowadays through virtual / social platforms, which of course spread the torment outside that usual circle. Already on the gigs we’ve done so far we’ve seen people that one maybe wouldn’t consider a die hard at first glance. But if you’re sick enough to listen to aggressive noise torment and show up to our shows, don’t let the madness stop you.”

I also noticed CONCRETE WINDS counts on pretty minimal virtual presentation, but is this intentional? What is your opinion for the virtual platforms as a whole and do you count much on them? What do you think are the positives and negatives of these tools?
“They are good in the way that it’s easy to spread your work everywhere basically and it’s easy to get noticed. But then again this is also why things tend to get overwhelming and watered down. There are so many bands and genres nowadays that you don’t know what the fuck is going on. We’re doing things in our own tempo, so right now we’re probably not using every available platform and will probably never use, but some things will happen in the future for sure.”

At the very end, what does the future hold for the band? Do you have new material in process? What pattern will this evil creation follow?
“The future will see CONCRETE WINDS entering stages across Europe and Scandinavia and then one should beware the blade of the ignominious butcher…”

Thanks, man! The space below is all yours to put the gravestone on this intie. Hail CONCRETE WINDS, hail death!
“Aggressive Noise Torment.”