The case of Greek DEATH COURIER is rather weird to tell to our readers… This has been a band with no clear references at all. I mean Greek in the end of the 80s and early 90s has been the land of amazing Greek Black melodic bands such as ROTTING CHRIST, NECROMANTIA, VARATHRON, DISHARMONY, THOU ART LORD and so forth. From the Deathrash point of view Greek offered quite a few acts, such as FLAMES and DEATH COURIER. Besides low budget productions of their releases they had been able to purvey really outstanding melodic Deathrash, but yet aggressive, tunes. If your collection doesn’t include the 1990 "Necrorgasm" 7" EP it is FAR from being complete! Hunt! And before the hunting read on what former member Bill has to reveal of what happened in Patra twenty years ago 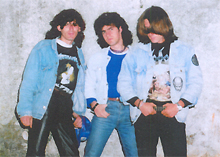 The band started out way back in 87 in Patra, Greece… I heard that the very first recording that you sent out was called "Trapped In Hell", released the same year of the inception and containing the same classic tracklist of the following demo: ‘Lunatic Messiah’, ‘Mass Impalement’, ‘Death Courier’, ‘Assaulted’, ‘Dawn Of Doom (to be continued)’. Have you faint memories of that year or did you remember it like it was yesterday?
"First of all I would like to thank Frank Stöver of Voices From The Darkside for this interview, the first after many many years courtesy of our mutual friend Nicola Costantini. You’re keeping the DEATH COURIER spirit alive. In those years we were so excited making music that we recorded almost everything we played. It was a way to improve our songwriting. So "Trapped In Hell" is one of that kind of recordings. I don’t have it so I can’t compare it to the "Deny Your destiny" demo." 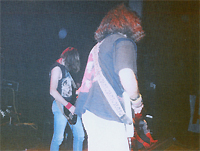 After some rehearsals which were spread within the underground, it was time for another official release. To my knowledge the "Deny Your Destiny" demo from 1989 was released in a lot of different versions… Looking at my (supposed to be…) original I see some hand-written comments by you Bill where you point out with a red pen that the copy is an original one. The demo got bootlegged in the heydays: were you aware of that? I can end up thinking that in the first place it contained 5 tracks (same as on "Trapped In Hell"). Then 3 extra tracks plus a live show (Live in Athens, Greece 02/05/89) was added… A huge demand for it or what (mine is # 373)?
"We thought 4 and a half songs were a very little offer, so we added all extras we had. I didn’t know that the demo has been bootlegged (this is the classic case that fans know much more than the band itself. On the inlay of their 1990 cult 7” EP it’s stated “Hate to all those who copied our demo and sold it to gain money” -Nicola). That’s ok with us: spread music. I wish I had a copy." 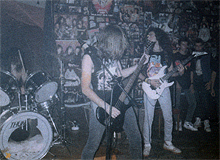 DEATH COURIER used to play live frequently in Greece, also doing some covers of bands like SODOM (‘Sodomy And Lust’), TERRORIZER (‘Resurrection’), DEATH (‘Evil Dead’) and DESTRUCTION. Was it a way to praise those bands which were your strongest influences? Nice to notice a mix between Thrash and Death bands… exactly what DEATH COURIER purveyed: a furious Deathrash blend!!!
"Exactly! We loved those bands and we grew up with them. So playing these songs you mention is our way of respect. ‘Pleasure To Kill’ and ‘Seven Churches’ (KREATOR and POSSESSED – Nicola) had been “playground” of DEATH COURIER."

I’ve a good zine-collection of around 300, but, I’ve only seen one interview in PUTREFACTION # 5, which was, by the way, one of the hugest back then. It seems DEATH COURIER didn’t receive that much recognition outside the Greek boundaries. Am I wrong? Jim used to be in contact with Christopher of THERION, did this not help?
"We’ve had always been guys of low profile. We thought and still think that recognition is a matter of hard work-luck-patience. Christopher of THERION was a good friend. We also had a very close communication with NIHILIST (later ENTOMBED) and SAMAEL. As these bands became bigger DEATH COURIER instead came into a series of difficulties. One of them is that after 1992 we could not find a guitar player in Patras."

Probably the cultest release of DEATH COURIER is the self-released 7" EP "Necrorgasm" from 1990. It sold out in only 6 months, so a good response indeed! I guess Richard C. showed up exactly at this point, offering you to re-press the wax as a tape EP. Richard was for sure a overbooked guy doing some mistakes here and there, both in managing stuff and bands. For example Swedish GODDEFIED’s 1993 MCD was marked as GODDIFIED. It was also the case of DEATH COURIER as Richard did a mistake on the tracklist. ‘Infected’ was the last track not the third one as mentioned. Many bands then claimed to have been ripped off from California’s smallest but heaviest record label. Was that also the case with the COURIERS? The tape EP was also available from your address, so I guess you got the classic deal "some copies to the band", didn’t you? 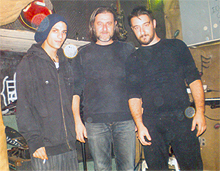 "You are right about the “Necrorgasm” 7”. It was our best release in those days. It made us the pioneers of the Greek Death Metal. Richard of Wild Rags liked it and released it in the USA. The payment was an amount of tapes to the band."

One thing I’ve never understood… To me ‘Infected’ is the best track ever of DEATH COURIER. Why was it relegated only like a filler, both on the tape EP and on "The Demise" (being the 9th track)?
"The track ‘Infected’ always reminds me of one of my favourite bands, SODOM. ‘Infected’ was considered too melodic and the tracks which followed were far more aggressive. So it was left behind."

Another very hard to find DEATH COURIER item is the 1990 split 7" EP with SEPTICEMIA, COULD BE WORSE and NEUROSIS which was released by Wipe Out Records and Decapitated Records, a label that later was renamed in Unisound (almost for the bad achieved reputation of the boss Panos). Could you please reveal us what the offer from Panos was?
"We wanted to spread the band’s name everywhere. So we sent a different version of "Necrorgasm" to the label. Anyway there was no offer from Panos."

The debut LP was supposed to be released on Wild Rags. Then in the end "The Demise" LP 1992 ended up on Psychosis Records, almost an unknown Greek label (managed by a certain Panos… was it the same guy of Decapitated Records maybe?)… How did the deal become reality? What went wrong with Wild Rags?
"We recorded “Demise” in only 6 days because our drummer was going to leave, to join the Army’s duties. We waited for ages to release it through Wild Rags. Then we dropped the contract and released it on a Greek label we found. By the way Panos is not the same of Panos of Unisound."

The debut album got an incredible weak production. No money left for anything better? Why did you not return to Red House, the place where you recorded the EP? Maybe it’s time to give real justice to "The Demise", re-recording the whole stuff?
"The sound engineer was a folk musician so we didn’t expect anything better. Add that we didn’t have the right amplifiers to make a more brutal sound. Anyway hearing the material of “Demise” in those year was a great experience (besides the weak production the album is DAMN AWESOME. I guess it’s limited to 1000 copies or less. Extremely hard to find like the 7” – Nicola). We now play new versions of ‘Demise’, ‘Necrorgasm’, ‘Mindwarp’ considered by the most as the weak tracks of “Demise”."

During those years you had the problem of the military service. The 7" is dedicated "to all the deniers of the military service and social status". Was it a problem which led in the end to the demise (eh eh) of the band? Was the band put on ice or on the local graveyard?
"We thought the band was put on ice when I went to the army in May 1991. Then we also lost our guitar player and in 1993 DEATH COURIER was buried in the local graveyard. Now in 2011 we have our second coming and we are working on new material."

I’ve in my hands this rehearsal, dated September 2010, which includes some GREAT tunes along with a re-make from an old classic "Mindwarp". So… "Mutans don’t survive" … whilst COURIERS are still providing some Death tunes for us die-hard Metal addicts. Can we expect a second full-length this new year?
"The new line-up consists of: Stathis – drums, George – guitar and Bill – vocals and bass. We recorded a rehearsal as a proof of existence (I’m listening right now to their incredible ‘in your face’ rehearsal 09/10 –Nicola). We are currently practicing seven new tracks and we hope to record a new full length sometime in 2011 (maybe during the summer). We hope to return to be active on the Greek Metal scene. In the old days we used to play with ROTTING CHRIST, SEPTIC FLESH, VARATHRON and NIGHTFALL and many other bands from Greece and we hope to do it again! Thanks for the interview and support. Billy DE.CO. 2011 – Join the Couriers!"