If you have a quick look at the logo from this Canadian four piece, you can already easily guess what kind of music these guys deliver… Yes, DISEMBODIMENT stands for extremely brutal Death Metal and the material on their very impressive debut release “Mutated Chaos” is heavily influenced by early INCANTATION, DETERIOROT, ROTTREVORE, ABHORRENCE and the likes. Guitar player Chris Lacroix took some time off and quickly answered a couple of our questions…


DISEMBODIMENT still is a rather new band to the scene, which was formed about a year ago (in 2020), but all four of you are also active in the Sherbrooke, Québec based Death Metal band OATH DIV. 666… So, what was the reason to start up another Death Metal band with exactly the same line-up?

“The main reason for the new band is that we wanted to have lyrics about different things than religious and satanic shit, we felt that with a name like OATH DIV. 666 we were kind of pigeonholed into those subjects.”

Unfortunately I haven’t listened to OATH DIV. 666 yet, so maybe you can tell us where the musical differences between OATH DIV. 666 and DISEMBODIMENT can be found and how you decide which music gets used for which band when you write your material?
“Right now it’s not so hard to differentiate because we don’t have any plans for future releases for OATH DIV. 666, so all the focus is on DISEMBODIMENT. OATH DIV. 666 might still play shows in the future if we get offers that makes sense, but it would have to be an offer that we can’t refuse or else we don’t wanna invest more time in it.” 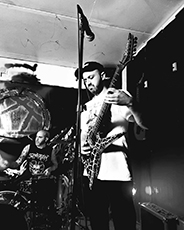 Are Carl (bass, vocals) and Eric (drums) brothers or is it just pure coincidence that they have the same lastname (Choquette)?
“Carl and Eric are brothers, they have played in multiple bands together since the 90s. A couple of those bands have demos / EPs that they self released on tape. I have put my hands on some obscure tapes from those bands which I might upload on YouTube when I stop being a lazy fucker.”

Which bands or releases had the biggest musical influence on you guys when it comes to the style of music that you play in DISEMBODIMENT?
“It’s no secret that our biggest influences comes from the 1991 – 1994 era of Death Metal. We worship releases such as “Onward To Golgotha”, “Upon The Throne Of Apocalypse”, “Consumption Of Human Feces”, “Iniquitous”, “Manifested Apparitions Of Unholy Spirits”, “Abhorrence” EP, etc.” 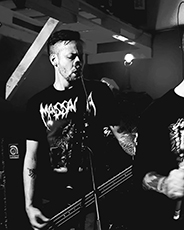 In late 2020, early 2021 you recorded five songs that got released as “Mutated Chaos”, first of all digital only via Bandcamp, if I’m not mistaken… Tell us a bit more about these songs and their origin. Have they been written directly for DISEMBODIMENT or is it material that just didn’t fit to OATH DIV. 666?
“Two of those songs were written when we were still jamming as OATH DIV. 666 but we changed the lyrics to them. The rest of the songs were written when we had decided to continue our journey into Death Metal as DISEMBODIMENT. They would have fitted for OATH DIV. 666 musically but they would have had different lyrics I guess.”

How did you find out about Studio C, where you recored the songs, and who’s behind Tehom Productions, which got mentioned for the mixing and mastering?
“We recorded OATH DIV. 666 (the band was named OATH back then) first demo there and the mixing and mastering were done by different people on that demo. We didn’t really know what we were doing back then, so the production is lacking a lot on that demo in my honest opinion. We had a great experience at Studio C though, also the studio is located like 10 minutes away from our jam space so that seemed like a logical choice because we couldn’t really travel because of Covid curfew bullshit and all that. Xavier Berthiaume at Tehom Productions did a killer job on the mix and master. He recorded, mixed and mastered “Apocalypse Division” for OATH DIV. 666, so we were familiar with his work already. He’s super easy to work with and he knew from the start what kind of sound we were going for since we had already worked together.” 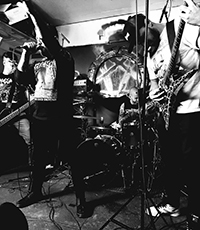 Do you personally consider “Mutated Chaos” more as a demo or an EP and how long did it take until Everlasting Spew Records and Caligari Records got in touch with you for the release of the CD and limited cassette editions respectively?
“We would consider “Mutated Chaos” more as a demo than an EP, or maybe is it a demo EP, who knows? Haha! We sent our songs to Caligari first and they were the first to respond interested in releasing it, Everlasting Spew came shortly after Caligari had released a song online.”

You also recorded a promo video for the track ‘Ceaseless Discharge’. What can you tell us about that?
“We have had the desire to do a music video for a long time for fun and it never happened until Math (Mathieu Breton, vocals – Frank) brother Mo could make it happen for us. We had a blast doing it, many scenes were deleted because they were too ridiculous haha! We have plans to do another one for this release in the somewhat near future.” 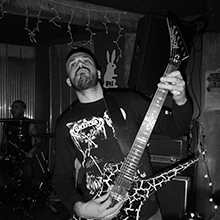 Except for ‘Below The Mind Of Morbidity’, the last track on “Mutated Chaos”, all of the songs are rather short in their playing time. Aren’t you into longer songs, or was it just coincidence that they turned out the way they are?
“Speaking for myself here, but when I write songs I don’t set any time constraints. I just go with the flow of the riffs and put a structure in place so it’s fun to play and listen. We’ve always been in bands where riffs and beats were more erratic than most, I guess that comes from our love of Hardcore, Powerviolence and Grindcore.”

Your logo was created by your drummer, Eric… Was that his first piece of artwork or had he already done anything else for you or other bands prior to that?
“He has done some logos for bands he had with his brother in the 90s so that was not his first go at doing a logo. He did a killer job on it and we didn’t have to pay a cent for it haha!” 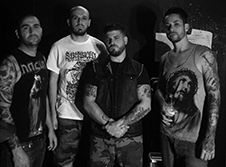 Tell us a bit about Rotten Species, who are responsible for the artwork on the CD… How did you find out about them or were they suggested to you by Everlasting Spew Records or Caligari Records?
“We found out about Rotten Species through Instagram, we liked what he did and bought a couple artworks from him since we discovered him. We have always worked this way, we find artworks we like, we buy them and then we do the layout ourselves.”

How’s the feedback on the “Mutated Chaos” material from fans, zines or promoters so far? Is it all positive or did you also receive any negative comments already?
“The feedback for “Mutated Chaos” has been amazing so far, we have had people reaching out to us to tell us they love it and shit, it’s great! We did see a lot of positive reviews and a couple negative reviews but we don’t care about those since we do this for ourselves and we love what we do.” 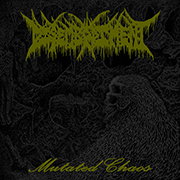 I suppose Covid prevented any DISEMBODIMENT live shows so far, but how about OATH DIV. 666? How experienced are you when it comes to live shows, with which bands have you shared the stage already and are there any DISEMBODIMENT shows planned in the near future?
“We have obviously not played shows as DISEMBODIMENT but we have shared the stage with many sick bands as OATH DIV. 666. We’ve played the first Québec Deathfest and the Earlslaughter Festival the year that BLOOD (Ger) played. We’ve also played with BLASPHEMY, DYING FETUS, DISMA and many many more, too many to list here. We don’t have any shows planned yet as Québec is still in lockdown because of Covid.”

How about new songs? Have you already written material since “Mutated Chaos” was released? What can we expect from you next? Is there a full length album in the making or will you focus on some more EPs or splits before maybe?
“We have already started writing songs for a split 7” with a fucking sick band. We can’t give too much details about this yet but the whole Québec sewage system will overflow dangerously from all the filth that will be created by this collaboration. Stay (down) tuned!”

Ok, that’s all for now. Thanks a lot for taking the time and all the best. If there’s anything else we might have forgotten, you’re welcome to mention it now.
“Thanks for this interview and all the best, stay safe…stay DEATH!”