The Death Metal underground is on the rise indeed! Another good band is called DISINFECT from the area around Stuttgart and Ludwigsburg. I happened to see them live at the EAR TERROR festival in Emden in 2001. There I had a pleasant chat with their guitar player Chris, so now you get the result of an email interview we did around X-Mas 2001. Have fun and check out DISINFECT!


What made you become a Metal fan? Do you remember your first record and your first concert? Which? Do you still like your old Metal records? Are you rather a CD or a vinyl freak? Which band "introduced" you to extreme Metal?
“Haha my first record was on tape and I was ca. 5 years old. It was a sampler of AC/DC my cousin gave me. My first LP was KISS with 9 or 10 years. Had to save the money a long time before I could by this LP haha. My first gig, there were a lot smaller underground gigs but the first big one was TANKARD. I prefer CD’s it’s easier with them especially when you can put 6 in your player haha. I always searched for something more extreme: first AC/DC, KISS, MOTÖRHEAD, CELTIC FROST, METALLICA, SLAYER, then NAPALM DEATH, SOD… now CANNIBAL CORPSE, DEICIDE, DEEDS OF FLESH, DISGORGE, MORBID ANGEL, NILE…“

What made you grab an instrument? Did you play an instrument before you wanted to play Metal, for example the piano?
“My first guitar was with 6 years after the AC/DC tape haha But I was too young and too stupid and it took 7 more years til I really began to play. No, it was only the guitar.“ 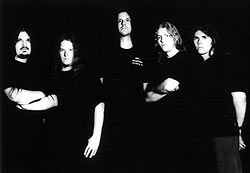 DISINFECT was founded in 1999. How did you find the other guys? Did you release anything before "Beinspender", maybe with a different band?
“The band had a lot of big changes, the biggest was after the SINISTER tour. I was the only member in the band but it was not so bad some days after I could select who should play in the band because I had about 2-3 new people for every instrument! The line-up was complete in the middle of 2000, til now! Before DISINFECT there were many bands. The last was OBSCURE it was in the way of old MORBID ANGEL, PESTILENCE or DEATH. I still have 5 tapes! If someone wants a tape it’s just 7,-DM“

I think you mentioned you’re in the graphics business – did you create your logo yourself? It looks quite good and yet it’s readable! Do you make logos for other bands as well?
“No, the logo was created by Christoph Szpajdel. He made logos for bands like EMPEROR, MOONSPELL, OLD MAN’S CHILD… I’m a photographer and graphic artist. I made a lot of booklets, pics of bands! If a band, label or mag is interested just write a mail!“

You are with Rest In Hell Records right now. Are you looking for bigger labels or are you satisfied with their work?
“Yes, sure. We didn’t do it first but we sent now promos away since two weeks. We need much more promotion in mags some big festivals… the problem is our label is too small to do things like this and you need much more financial power to do it!“ 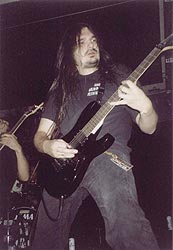 You already played many of gigs and even a tour with SINISTER and APOPHIS and you are known as a good live band. So what led to the bad situation at EAR TERROR Festival in November 2001? And what made you decide you’re gonna bring that gig to an end? The next day NECOLOGY even gave up…
“There was nothing to hear on the stage!!!! Only a broken trigger! Secondly, we arrived just a few minutes before our gig and it was really a long distance to drive 850km and that in winter and if you only sit in the car and then you had to go on stage and play and then you have a sound like that on stage! We had to play til the end because the people paid the money to see us and we don’t want to disappoint anybody! Hope we’ll get a second chance to show them what DISINFECT really means on stage!“

Would you like to be the opening act for a big festival tour like the NO MERCY or the X-Mas tours? There are so many bands on one evening – do you think it would help your band? Being a Metal fan, do you attend such shows yourself?
“?!?! This is a really good question! (Of course it is – Ramon ; -)) It’s good because a lot of people can see you (maybe) but as the first band in this kind of big festival-tours it could be you can’t play because of the time or you have to play at a really early time and not too many people will see you. I don’t know but I think if someone will ask we’ll say yes haha. I don’t like it too much as there are too many bands for one day.“

What do you think about writing songs, recording them and playing live?
“Everything is great. The period til the new song is made or when you record it is very creative and it’s always great to see how the people react on your new songs. Playing live is the most important thing and the best way to show the power of your music!“ 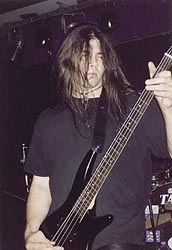 Who writes the DISINFECT songs? How do you do it? Do you develop them at the rehearsal room with everybody jamming or do you rather sit down on you own?
“The most songs are made by myself. Normally I sit at home and play. The best riffs are taken then and after we sit at the rehearsal and try to make something great. Sometimes another member has a good idea to add to the song. But the other guitarist becomes more and more involved in the music of DISINFECT.“

How important are the lyrics for DISINFECT? I think you’re using German lyrics for some songs, right? Why? Who is responsible for DISINFECT lyrics anyway?
“Lyrics are very important! We don’t want to write only gore lyrics like 10000000 bands. There are a lot of different things we talk about in lyrics. But there are some gory and bloody songs, too haha. It’s just one song in German language. Most of the songs are written by our vocalist, then me and the other guitarist.“

Can you briefly explain what each song is about?
“Yes sure! ‘Beinspender’: It’s about a soldier and war mines. ‘One Night Steak’: One night stands. One part is always only a piece of flesh to satisfy somebody’s sexual fantasies. ‘Darmmanifest’: Our society and the only god is money. ‘After Killing’: A serialkiller is doing his job. ‘L 2 A 5’: About a tank and the power of it. ‘Inner Fear’: it’s a personal song about fears and that you fight against them. ‘Grave New World’: The human race and how we handle it with our nature. ‘Menschenfeind’: Misanthropist. ‘Foxy Disintegration’: Death and the hope that there’s something after this what we call life.“ 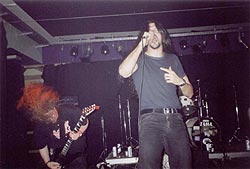 "Beinspender" seems to deal a lot with war – is it a concept album? Where did you get the movie samples from? I bet one of them is from "Stalingrad", one of the most frightening movies I ever saw… What attracts your interest to war anyway?
“Yes, it’s a lot about war but it is not a concept album. The samples are from Stalingrad and the first from?! Don’t know haha. War is something typical for the human race like to eat or drink. You know its like: "If there is no war we’ll make some". They’ll always find a reason.“

When will we hear a new DISINFECT CD?
“Hope in the middle of summer 2002!“

What do you think about the current german extreme underground scene? Are there any bands you personally like a lot?
“I think the scene is growing!! It’s great to see that there are more and more people at concerts!! There are some very good bands like ANASARCA, GALLERY OF DARKNESS, OF TREES AND ORCHIDS (now called INGURGITATING OBLIVION – Ramon), FLESHCRAWL, APOPHIS, OBSCENITY…“ 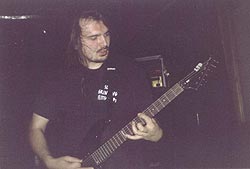 You’re organizing the DEPTH OF WINTER festival near Stuttgart every year. What’s the idea behind it – I think it’s a charity festival for children with cancer? I think that’s a brilliant idea – how did you develop this concept? Did you work in a hospital? Are there any commonly known bands playing the festival or is it pure underground?
“Yes it’s a charity one. I spend the money for children with cancer this year. I think the money will be for animals next year! It was not my idea. It’s the one of Haiko. He was our first drummer and he made this festival for years but he had no time to organize it any longer and the last two years were put up by myself and the help of some other people. I got big help from Oliver of SACRIFICIUM he made the homepage and he was one of the sound guys! I always try to put some good underground bands on stage but some well known bands, as well! Last year FLESHCRAWL, APOPHIS this year DISASTROUS MURMUR and next year??“

Do you have a funny or interesting story for our readers?
“HAHA I think there are a lot of really good storys. I’ll talk about the gig on the SINISTER tour in Weinheim. At this day some people stood in front of the place and they didn’t have enough money to come in. I came out in front of the place and I was fuckin’ drunk and they asked me if I can do something and I let them in. Two of those visitors play now in my band and one of the girls didn’t want to come with me to the hotel room , weeks later I met her in a club but I wasn’t so drunk like on tour haha and we talked a little bit and she said something about the tour and if I knew her. I was not 100% sure because I had been so drunk that time. Some days after we had a date and since then she’s my girlfriend! That’s a funny and romantic story haha!“

Any last words? Anything you would like to add?
“Ramon, thanks a lot for this very cool interview!! Have a nice X-Mass and don’t drink too much haha. The readers should take a look at www.disinfect.de and if you like our stuff you can buy our new CD! ; -)“