The new GOD DETHRONED album “Into The Lungs of Hell” once again underlines the band’s qualities. An interview therefore seemed to be a good idea. Unfortunately band founder Henri wasn’t available for email interviews so here is a quickie I did with “new” GOD DETHRONED drummer Arien. He could have answered the questions a bit more closely (and more extemsively) but what the hell


First of all: would you please introduce yourself to our readers, e.g.: your personal (Metal) background – when and how did you make your first steps into the world of Metal as a fan and as a musician? In which bands did you play before GOD DETHRONED and are there any recordings available from those days?
“Well, I started playing drums when I was seven years old. I got into Metal when I was fourteen, and with some friends from highschool I started a Death Metal band, and with them I did three demos. I sent one of them to Henri, after I heard that God Dethroned was looking for a new drummer. I was invited for an audition, and after having played with the guys, which was pure fun, I came in the band. And now I’ve been in the band for almost two years.“

Did you ever consider hiring a vocalist or a guitar player to make life easier for Henri on stage?
“No we didn‘t. Henri has a typical voice and a typical playing of the guitar, and both are hard to replace.”

How did you get your deal with Metal Blade in 1997? Did you record and send out demos to several record companies? If so, how many demos did you send out approximately? Did you have any worries after the deal with Shark Records in the early 1990s didn’t fulfill your expectations?
“Henri sent a rehearsal tape to Metal Blade, and it came as a total surprise that Metal Blade was interested in the band, I mean, it was a rehearsal tape… Henri didn’t have too much worries about finding a record company.”

Are all your demos and unreleased tracks included on "Ancient Ones" or is there still material rotting in somebody’s cellar? Will that see the light of day in the near future?
“With our new album there will be added a bonus CD, containing a re-recorded version of the song ‘God Dethroned’, a cover from POSSESSED ‘Satan’s Curse’, and live recordings from their American tour, and two video clips for the CD-rom.”

Quite a few people in the extreme Metal scene absolutely despise any kind of melodies. Yet, as soon as somebody mentions GOD DETHRONED, most of them admit that they like the band. Do you have any explanations for that?
“I think that God Dethroned is able to integrate melody IN brutality. In other words: we try to create a good balance between fast / heavy parts, and atmospheric melodic parts to let the music breathe more.” 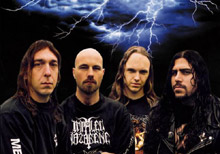 GOD DETHRONED certainly are more sinister and evil than most of the other bands using melodies. How come? How do you compose your songs anyway? Is really everybody involved? And what are your main influences? I can hear MORBID ANGEL coming through at several points on the new album… what else?
“Everybody is involved when we are writing music. I guess that Morbid Angel is one of our strongest influences, along with Slayer.”

How exactly did you get the job as the new GOD DETHRONED drummer and were you already integrated in the song writing process? The new material appears to be slightly straighter. Is that already your influence?
“As I said, I sent a demo of my own band, and I was invited for an audition, which worked out very satisfying. Personally and musically it was ok between us. It still is, by the way (haha). I wrote guitar lines as well. What I’ve done is trying to play the drums as powerful and precise as possible: I tried to give every stroke on the drums the same power and intention, and with exact timing. I guess this works out on the sound of the band in general.” 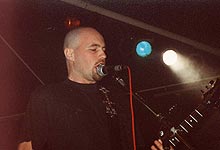 Your lyrics are much deeper than the ones of the usual Death Metal band. How important are the lyrics for GOD DETHRONED, even disregarding the anti-christian message? And how do the songs come to life? Does it happen that the lyrics are there before the music?
“We wrote the lyrics in the studio. Good lyrics can lift up the music to a higher state and give extra power to it all.”

Concerning the lyrics: the words in "Slaughtering The Faithful" in comparison to the new (or rather original) cover on "The Christhunt" seem to be a contradiction on the surface. Can you show us the parallels?
“The butchered rat on the cover of "The Christhunt" was to show the stupidity of religion and Christianity in particular. In ‘Gods Of Terror’ we did the same thing, so the parallel is between those two songs, and not “Slaughtering The Faithful”.

Can you comment on the cover artwork of "Into The Lungs of Hell", please? Who’s the artist? It looks like a classic painting but there are burning skyscrapers in the background. The sinners seem to be dragged into the flames. Is the modern city, the moloch, today’s hell? How much is it inspired by November 11th? And what was the band’s input here? Did you tell the artist exactly what you wanted?
“The artist’s name is Joachim Luetke. We had some ideas about the cover of the album and we pointed out a direction to Joachim, and he worked it out from there. You described the meaning of the cover pretty well. It has got nothing to do with September 11th in America. It’s the modern western society in general. The fire and bodies are a warning to what will become of us if we are going to live on like this.”

As there are quite a few musicians reading Voices as well – would you please introduce the equipment everybody of GOD DETHRONED uses as precisely as possible (if that’s not a secret)? Why do you use it? Do you plan any changes in your set-up?
“Henri, Jens and Beef play BC Rich guitars, with Marshall guitar amps, and an Ampeg bass amp. I play Premier drums and all kinds of cymbals, not just one brand. I hope I can play just Sabian cymbals one day, but as long as a cymbal sounds great, I don’t mind about the brand of the cymbal.” 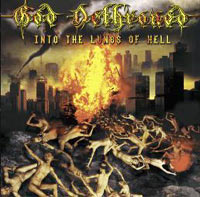 GOD DETHRONED played tours with CANNIBAL CORPSE, MORBID ANGEL, IMMORTAL and many others. There were tours in America as well as in Japan. Are there any unfulfilled dreams left? Any bands you’d like to share the stage with or any countries you’d like to tour?
“We hope to go to China one day. Maybe Russia, Spain, Portugal… we’d like to go to the US and Japan again.”

As GOD has already been DETHRONED – who is now in command? Who should be? Should somebody be?
“People should be in control over themselves, with respect for each other.”

You probably experienced quite a few things, especially on tour. Would you please share a special, not necessarily funny, moment with us?
“I think the rest of the guys can tell you a lot more than I can. Especially the US tour was killer according to the stories they told me! I joined the guys a year after unfortunately…”

Anything you would like to add?
“Hope you all like the new album! Cheers, Arien – GOD DETHRONED.”