Barcelona’s GRAVEYARD currently belong to the most active bands within the Spanish scene, especially if you have a focus on the classical way of Death Metal. It’s a band that breaks the delusion that this particular style just has its monopol in the Scandinavian countries, the UK or Holland. Just take a listen to their brandnew second full length album entitled "The Sea Grave" – a classical raw sounding outburst with a dark and gloomy atmosphere. Good to have them finally in the interview section of VOICES FROM THE DARKSIDE. Our questions hit the desk of guitarist and GRAVEYARD mastermind Javi Félez Rodríguez…


Hola Javi, welcome to VOICES FROM THE DARKSIDE! Here in Germany a lot of Metal fans might think about a Swedish Doom Retro Rock Hippie styled band when they read the name GRAVEYARD. So I think it’s time for you clear things up here!?!
"Hey Ralf, what’s up my friend!? Yeah, we’ve been confused with the Swedish band a few times recently, but there’s nothing we can do about it. Both bands released their first stuff around the same time (2007), we knew about their existence when they got signed with Nuclear Blast one or two years ago. Both bands have different logos and play different styles of music, if you think our logo looks hippie or their logo looks evil, you have a problem, mate Ha! Ha!"

I mean you’ve started in 2007 with a clear agenda in creating classical Death Metal, even before this new Death Metal boom totally exploded. So what shall the fans of that Death Metal subgenre know about you!?!
"Yeah, we are raising hell since 2007. At that time we didn’t know what was going to happen in the next years, I mean, of course you’ve had bands like NOMINON, DEATHEVOKATION (R.I.P.), VERMINOUS, REPUGNANT, KAAMOS and a few more doing that kind of 20th century old fashioned kind of classic Death Metal, but it was just a bunch of bands, not a trend, movement or whatever. Anyway, we don’t really care that much, we have spent six years recording, playing and rehearsing non stop so that’s what it counts and nowadays GRAVEYARD is stronger than ever thanks to our new line-up and our gift from the Old Ones: "The Sea Grave"." 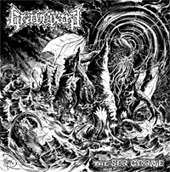 The second GRAVEYARD album entitled "The Sea Grave" will hit the scene in March via German War Anthem Records. Would you agree with me when I say that you’ve continued the devolpement of your 2011 MCD "The Altar Of The Sculpted Skulls"? I mean you’ve decided again for a more raw and organic way of recording and most of all compared to your early recordings you’ve got rid – off this let me say "standard" Swedish influenced classical way of Death Metal. Could you agree!?!
"Well, of course the Swedish legacy has been important for us, but we’re labeled as "Swedish DM" basically because of the massive downtuned guitar sound. We have plenty of Swedish inspired guitar riffs or drum patterns, but you can find a lot of Finnish, American, Dutch or British Death Metal touches here and there as well as some Thrash, Heavy or Doom Metal oriented passages. I’m sure that if we had a different guitar tone, it wouldn’t look that obvious, you know what I mean? (Of course, it’s about the tuning and the HM2 distortion pedal! – Ralf). We don’t think about UNLEASHED or CARNAGE when we write our songs. Of course you can find one riff here or another one there that reminds you of those Swedish old legends, but there’s a lot more things on the formula, especially on "The Sea Grave", which is our most varied stuff so far. We have changed the writing method, both musically and lyricalwise, besides our ex – guitar player SBE and our drummer Gusi had a lot of input on the album compared to previous releases. In my opinion "The Sea Grave" is the first GRAVEYARD release that shows a bit of a, let’s say personal style, as far as classic Death Metal is concerned. I really like the atmosphere from this new album. It’s far darker and gloomier than our previous releases which were more "in your face", fast and brutal bursts. The arrangements are also more present on this new album, bear in mind that we spent almost six months working on it at the studio compared with the previous album or EPs that were done in a few of days (GRAVEYARD mainly recorded in their own studio, called MOONTOWER, in Barcelona – Ralf)."

You’ve done already five split 7"EP releases and you’re a really dedicated underground person by running your own fanzine, Hellspawn Mag, as well; but where do you see the main problems for Spanish bands in getting more focus on the European scene!?!
"This is a very hard to explain issue. Politically, Spain is a part of Europe but being down here on the south we have always felt kind of "far" from Europe. When someone creates a band in Spain, they barely think on an "international" level. I mean, most of the Spanish bands just release their stuff here and do shows here and have no contacts at all with foreign people. Besides, all generations that grew up before the boom of the internet have a very poor (or even nonexistent) knowledge of the English language, which of course doesn’t help. Last but not least, Spaniards as a society have always felt some kind of inferiority complex towards the rest of European countries (besides in soccer, sorry to my German friends, Ha! Ha!). The unspoken rule here goes like this "if it comes from outside, it will probably be better" and it works for bands from USA, UK, France, Germany or Sweden." 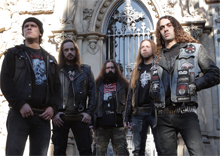 But you have a lot of Death, Grind and Black Metal bands down there in Spain, but it seems to be a hard task for them to gain a more wide spread attention!?!
"You name it. But things seem to be changing on the last few years, and more Spanish bands are doing things on an international level, especially underground Metal bands like MACHETAZO, PROCLAMATION, FOSCOR, TEITANBLOOD, HAEMORRHAGE, KÖRGULL THE EXTERMINATOR, ATARAXY, LUX DIVINA, PROFUNDIS TENEBRARUM, DOMAINS or AVULSED. I mean, do you know any Heavy Metal or plain old Hard Rock Spanish band besides the mighty BARON ROJO? Probably not, Ha! Ha! By the way don’t check them out, most of them suck!. As I said, this is a very complex subject, we will discuss it next time in Germany with one of those fine warm beers of yours (Better prefer a cold one in summer – time, Ha! – Ralf)!"

Javi, I know that you’re a big fan of classical Metal as well, especially SAXON and most of all CANDLEMASS!?! You even did a CANDLEMASS coversong on your debut album, so what kind of impact has the classical style of Metal on GRAVEYARD?
"That’s the shit, Ralf! Well, CANDLEMASS has been me and Julkarn’s favourite band (only second to MOTÖRHEAD, of course) for so many years and you can hear it on GRAVEYARD. I could tell you a few riffs in every album that were heavily inspired on them. I think CANDLEMASS’ legacy works pretty well with Death Metal, especially if you play on the slow or mid tempo side of it. I know it sounds very untrue, but I’m not a hardcore Death Metallist actually, I’m a proud Metalhead and I like SAXON, ACCEPT, BARÓN ROJO or RUNNING WILD as much as MORBID ANGEL, AUTOPSY, MORGOTH or BOLT THROWER. I couldn’t live without my daily dose of Heavy Metal! The classic Metal bands were the first bands that I started listening to in the early 90s so that’s were I come from, Hard Rock and Heavy Metal. All those Heavy Metal bands of course had an impact on me when it is time to write for GRAVEYARD, you can hear it in the song’s structures, some arrangements, our melodies and lead guitar solos." 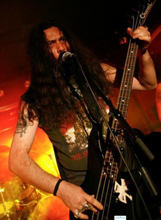 What do you think stunning success of newcomers like ENFORCER, IN SOLITUDE, ATTIC etc.!?!
"I like some of those new bands like ENFORCER, IN SOLITUDE, CAULDRON, PORTRAIT, SIGN OF THE JACKAL, IRON CURTAIN, STRIKER, VANDERBUYST, SKULL FIST or ATTIC a lot. But you know, all of a sudden you have one million new Heavy Metal bands, everybody loves classical Metal, while not so long ago you could get a punch in the face if you showed up with a SAXON t-shirt on any Death or Black Metal event! To be honest, I unfortunately think it is a trend, my friend, but I wish I’m wrong because I’m enjoying it like a pig in the mud by listening to most of these new cool bands, attending their shows or festival appearances."

Finally use the chance and convince our readers in your own way why they shall get a copy of you new album "The Sea Grave"? By the way will it be out on vinyl as well and what some GRAVEYARD live ceremonies in the middle of Europe for the upcoming months?
"I know I’m not the right guy to talk about my music, but after listening to tones of recently released Death Metal albums (because of my fanzine), I’m sure "The Sea Grave" really has something to say. I mean, it is more than 50 riffs put one after each other. I think it is an album that you can listen to a lot of times and don’t get bored, especially if you compare it with our previous releases which were a lot more direct and "in your face". "The Sea Grave" will be released by War Anthem Records on March 15, on both vinyl and digipak CD. So far we have two shows in Spain (Barcelona, Madrid), the Party San Open Air, and probably two more European festivals (plus some shows in between) which may not be announced yet, check out www.facebook.com/deathmetalgraveyard or www.war-anthem.de for further details and updated info, Cheers & thanks!!!!"