HORNS OF DOMINATION is a rather new German Black / Death Metal band who impressed me very much with their "Demo 2015". On the tape, there are 2 tracks of rather raw, doomy Death / Black Metal with a very obscure atmosphere which is just necessary for this kind of music. Make sure to go to their bandcamp site and check those tracks out for yourself! The whole band sat together to give the answers for the interview. This interview was also published in the Belgian magazine Rock Tribune and it was even the band’s very first (!) interview ever. 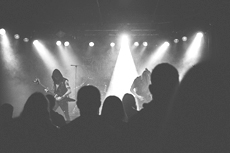 Can you give a little bit more information on how HORNS OF DOMINATION got together? What would you say is your "goal" with the band?
"D.P. and C.G. originally wanted to start a War Metal band, as this was a huge influence for both of them for many years. However the first song ideas and rehearsals revealed that their music seemed to turn out more complex and distinct sounding. Eventually their original drummer had to quit due to illness and S.E. took over the position. Which was a quite logical step, because D.P. and S.E. knew each other for years and often talked about common future projects. After all, things worked out and HORNS OF DOMINATION started as a full band in October 2014. The first planned ambitions were to celebrate a few live rituals, release some material and from there we’ll see what the future brings."

You have a very almost "apocalyptic" sound. If I would have to compare you to other bands, I’d say you sound like a mixture of WARHAMMER, BÖLZER, KOSMOKRATOR and NECROS CHRISTOS. Very doomy, atmospheric and sometimes a bit chaotic sounding Black Metal. How do you see this? Would you say that it was difficult to "create" your own sound?
"Everybody in HORNS OF DOMINATION shares the same vision and ideas of our music. When we follow these, a musical transformation pours out of us without a blueprint, role model or boundaries. So our sound developed just naturally and we didn’t force ourselves to sound similar to certain bands. We’re all active within the scene for more than 10 years and have played in various bands with diverse styles such as 70s Heavy Rock, Doom, Thrash Metal, Grindcore, Death Metal as well as Black Metal and also other "non Metal" projects. Personally we listen to an even wider range of music. So maybe all this falls into place within HORNS OF DOMINATION. And probably members of aforementioned bands went through a similar personal development. For sure they are also crafting their own unique apocalyptic musical monstrosities."

The sound of your demo is very good, despite the fact that it’s a sort of rehearsal. So how did you manage to get such a good sound, when you recorded it in your rehearsal room?
"Thank you. When recording the stuff, the goal was to keep it simple and to focus on the energy. We just used 1 or 2 takes on each song. The main point during the mixing process was to combine the harshness of a rehearsal / live recording with a deeper atmosphere using a more professional studio approach. We’re actually also satisfied with the result. Still this can’t be compared to a proper studio recording (which was also never the intention). So for a demo, we think we managed to capture an interesting and also fitting raw sound."

Your first demo features 2 own songs, ‘No Beyond (For No One)’ and ‘Throne Of Ecstacy’. In the first song, you can hear a sample. From where is this sample taken?
"The sample in ‘No Beyond (For No One)’ is taken from the movie “Of Gods And Men”. The sample in parts quotes the French philosopher Pascal: "Men will never do evil so completely and cheerfully as when they do it from religious conviction. Here there is chaos and violence."."

Judging by the cover of the demo and also the titles of your songs, it seems like you put a lot of effort in the packaging and the whole concept of your first demo. So, can you go a little bit more into detail about the concept of the band and the concept of your first release?
"A specific concept certainly sets some kind of boundaries and naturally causes order while you have to follow an agenda. Also a concept is established by rational thoughts. We’re striving for a deeper vision breeding out of our rabid hearts, or subconscious if you want to call it like that. Oculus non vidit, nec auris audivit. I guess what you perceive as concept is rather a sign of the unspoken congruency between the three of us as manifestations of the entity that is HORNS OF DOMINATION." 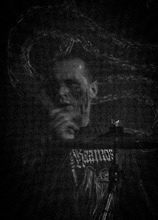 Your demo is available on tape as a cassette and as a digital download. I have the impression that a demo in the form of a cassette is more and more making a comeback. So why did you go for this format? Would you like the idea to release the demo on vinyl as well?
"Actually it was never a big question for us to do it in another way. Releasing in this format was always the first goal to start with. So it felt quite right. With HORNS OF DOMINATION we played our first live shows in March 2015 without having any recordings / releases at hand. Especially after the gigs, we received a lot of requests for any material. We still had a few empty tapes left, so we just decided to record 2 songs and put out a demotape. The length of both songs would fit perfectly on a vinyl 7”. But to be honest, we never thought about that and we think that there is also no urgent need to release a demo on vinyl."

Apparently, the demand for your demo was very high because you’ve already sold way more copies than you expected. Were you surprised by the interest in the band? Do you think most people want to check out your demo because of the past of some of the members in the bands DESIR DE MOURIR and EXCORIATE?
"To a certain extent such things might be of some help. On the other hand a bad release stays a bad release and it doesn’t matter if the performing artist once played in this or that band. We don’t feel the need to peddle bandnames that much and to put on a big boasting promotion show. Actually, we put out that information to give people a slight hint of what to expect since the band appeared in the ring pretty much "over night". It is more the opposite for us, only the result is what counts. But of course we were quite surprised by the interest in the demo so far, especially considering our "do it yourself" approach as well as our attitude towards media and a restraint for a bigger promotional effort. Above all, each of us could also live without getting bigger attention as we do this primarily for ourselves."

You have played 2 gigs so far. How did those gigs go? Do you think HORNS OF DOMINATION is already a good live band? What makes live gigs special in your opinion? How does a gig of HORNS OF DOMINATION look like?
"We played 2 shows in March 2015 supporting DROWNED, RAVENCULT, REVEL IN FLESH and DEATHRONATION. We are nowhere near a position to judge if we are a good live band or not. However, we all have collected our fair share of experience in bands and playing live before. Even the very first show already felt completely natural to us and probably also took quite a few people by surprise. We’re not in it for a huge theatrical show or something. We just play Black / Death Metal with a dark / doomed edge and we take no prisoners. It’s simple as that." 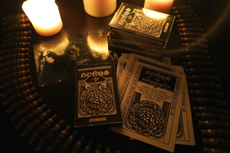 As there’s already much interest in the band, I can imagine that an offer from a bigger label will rise sooner or later. Would you like that idea, to release your music through a bigger label with better distribution? Or would you prefer to keep everything in your own hands and do the things on your own terms?
"The more bigger / professional a label gets, the more it depends on commercial success. After all, these bigger labels are just companies / businesses in the same way as any regular company within a different industry. Considering our approach towards music and the band in general, we could imagine that this would certainly place a weight on our shoulders and impair our freedom. Therefore, we would always prefer keeping things "do it yourself" or to work with smaller labels which we personally know and which share the same vision and understanding for what we do. "Big labels" might also be a misleading term within the scene we are part of. We definitely would never choose a label that would restrict our creativity or that would try to push us in a different direction. All decisions are always wisely and equally discussed within the band. We need no bandleader who rules with an iron fist and commands the band. Our tyranny comes from the three of us in equal measure."

What are your current future plans?
"We will start preparing our debut album in the first half of 2016. All songs are already written. However it somehow happens naturally that we start to add further details or re-arrange specific parts during the recording or mixing process. So there is still no firm schedule for this but "be forewarned". We’re also planning a few more live shows – club shows as well as festivals – for 2016. So far, we have been confirmed for the Braincrusher Festival in Hirschaid (south of Germany) on Saturday April 2nd 2016 along with our friends DROWNED, SULPHUR AEON, CHAPEL OF DISEASE and some more. Interested organizers or individuals should get in touch!"