If the name INHUMAN CONDITION somehow rings a bell to you, it’s absolutely no coincidence. This Florida based band not only named themselves after the 1992 EP of MASSACRE, their line-up also features musicians that all have been involved in MASSACRE at one point or another. So, it’s no surprise that their debut album “Rat°God”, which was released earlier this year, has a lot of musical connections to MASSACRE as well. We hooked up with bass player Terry Butler (ex-DEATH, ex-MASSACRE, ex-SIX FEET UNDER, OBITUARY) for the following interview to find out what INHUMAN CONDITION is really all about… 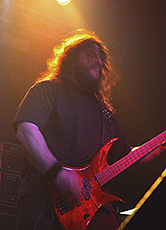 Hey Terry, I hope you’re doing well. Thanks for taking the time to do this interview. From what I’ve read, INHUMAN CONDITION will embark on a US tour in September, so are you currently preparing for that or what are you up to at the moment?
“Thank you Frank, I am doing well considering the insanity in the world right now! Yes sir, we are rehearsing for our first tour up the east coast of the US starting September 4th to the 18th.”

Will there be any Covid-19 restrictions at these shows for fans that would like to show up?
“So far no restrictions yet. We are playing small clubs, so we should be ok. We will still be careful and do our part though. Live Nation & AEG will require proof of vaccination or a negative test result for entry to show. I believe that starts October 4th.”

You already have played at least one show with Lee Harrison from MONSTROSITY / TERRORIZER on drums… will he join you on that tour as well again?
“Yes, Lee will be helping us out on the “Tourantula” tour. He played with us at the Brass Mug here in Tampa recently.”

What about Ruston Grosse, who’s supposed to be the band’s drummer? Is he no longer part of INHUMAN CONDITION anymore?
“Ruston played with us for our very first show ever in New Port Richey a few months ago. Ruston is a great drummer, hell he is a great musician in general, but we asked Lee if he wanted to help us this time and he said yes. The door is never shut so to speak for Ruston.”

Why did you decide to use an additional drummer for live shows anyway? Is it too much to handle for your vocalist Jeramie, who also played the drums on the album?
“Well, it would be a lot to play drums and sing for an hour and a half every night on tour. Jeramie wants to concentrate on vocals live for INHUMAN CONDITION. As an artist he wants to get his message across through his vocals, especially in a live situation. I’m sure he feels this is the best way for him to do that. In the future we may find a permanent drummer, but for now we are having guest drummers. Maybe that will be our thing lol.” 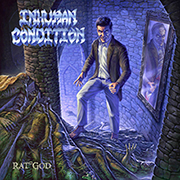 Have I understood that correctly, INHUMAN CONDITION was originally a MASSACRE line-up that fell apart? How long did that last and were all three of you, Taylor Nordberg (guitars), Jeramie Kling (drums / vocals) and yourself (bass), involved? What happened?
“As you probably know, MASSACRE have for some reason been a drama fest for all of its many incarnations. I think we can deduce the common denominators with that. So Jeramie and Taylor joined MASSACRE at some point in 2019 I believe, after Rick and Mike were ousted. They played a hand full of shows and got the green light to write a new album. After Jeramie and Taylor wrote 14 songs and played a few of them live the drama raised its ugly head again. The vocalist started ghosting them and elevating himself beyond the rest of the band. So they said “later dude” and took their songs with them. I was not part of that line-up. I heard that they quit and messaged Jeramie to say “Sorry to hear about you guys leaving”. He said, “Would you like to put bass on these songs?”. I heard the tracks and was blown away how good they were. It was just total Florida Death Metal!! I said “Absolutely, I will put bass on them.” 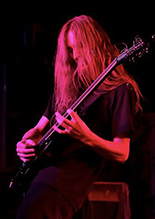 Former MASSACRE guitarist Rick Rozz plays a guest solo on the song ‘Tyrantula’… so, I suppose you are still friends with him? How did that co-operation come about or was he also part of that shortlived MASSACRE line-up with you guys?
“I believe Jeramie and Taylor asked Rick to do a few leads on the album around the same time I agreed to be part of the album. I have not talked to Rick since the MASSACRE fallout in 2014.”

So, was the whole material on the INHUMAN CONDITION debut album “Rat°God” originally meant to be released as a MASSACRE album then?
“Yes, it was to be a MASSACRE album. That’s why it’s sounds like MASSACRE.”

Since the band is named after the MASSACRE EP of the same name now and you even used the same logo design, I suppose the MASSACRE connection is still wanted? So will you continue to write material in that direction in the future as well?
“Yes, the name is from the EP and the song. Jeramie and Taylor chose the name and logo without knowing that I wrote the song ‘Inhuman Condition’, so it’s a cool bonus so to speak. They wanted to capture every element of the songs, so the logo and name are part of that. Of course the connection is there and wanted. We believe we can carry that torch better and stay true to old school Florida Death Metal. Future material will be in the same vein.” 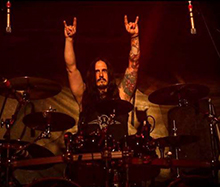 Does the spelling of the album title “Rat°God” have a deeper meaning or is it just meant to be a visual aspect?
“The spelling is more of a cool visual. Something different.”

In the album opener ‘Euphoriphobia’ there’s a riff that heavily reminds me of ‘Legion Of Doom’, the old MANTAS song… is that pure coincidence or was that meant as some kind of tribute?
“It’s a coincidence. We wanted to convey that old school vibe. So much good music from that era.”

The cover artwork looks very much like an Ed Repka painting, the guy who also did the early MASSACRE covers, but surprisingly it was created by a guy named Dan Goldsworthy… How did you get together with him, is that his typical style or did you ask him to do something in the Ed Repka style? Why didn’t you work with Repka himself again?
“Jeramie and Taylor contacted Dan and told him what they were looking for. To continue that old school feel they asked him to think of Repka. I think he nailed it. I think Dan is a killer artist in his own right. So we gave him a shot.”

Taylor and Jeramie both wrote the lyrics for the album, except for ‘Killing Pace’, which was written by Paul Mazurkiewicz (CANNIBAL CORPSE)… Did Paul write that exclusively for INHUMAN CONDITION or was it unused CANNIBAL CORPSE lyrics, that he had still lying around?
“Paul wrote that exclusively for INHUMAN CONDITION. He is a good friend and lives near Jeramie and Taylor. They asked if he would like to try a song and he was game for it. He did a great job.”

What about the music? Who’s the main songwriter in INHUMAN CONDITION or is it always a complete band affair?
“Well Jeramie and Taylor wrote the songs before I joined, but I will contribute when it’s time. The band is a complete affair. All For One!” 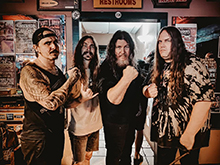 “Rat°God” was originally released via Listenable Insanity Records, which is your own label, if I’m right… But you also licensed it to other companies like Spiritual Beast (with an additional live version of ‘Tyrantula’), Black Serpent Records (with an additional live version of ‘Killing Pace’), Metalized Distro and Rapture Records… any bonus tracks on the Metalized and Rapture editions as well? Have the bonus tracks all been recorded at the same show?
“I believe the bonus tracks are just on those 2 releases. Yeah, they were recorded at the same place.”

You recorded “Rat°God” at Smoke & Mirrors Productions in Spring Hill, Florida… What made you record there or is that your own studio?
“That is Jeramie’s and Taylor’s home studio. So, it was a no brainer to record there. You can make your own hours of operation lol. Very comfortable atmosphere there.”

You are still a member of OBITUARY and Lee is still involved in MONSTROSITY and TERRORIZER… What about Taylor and Jeramie? Which of all their other band activities do they still continue on with and with all that in mind, how does the future for INHUMAN CONDITION look like?
“They are still very much a part of THE ABSENCE, GOREGANG and FORE. Jeramie is with VENOM INC. Well the future looks bright. When we have open spaces in tour schedules we will fit INHUMAN CONDITION in those holes.”