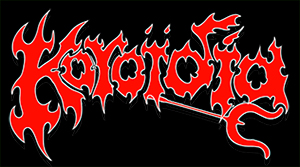 KOROIDIA is an American Death Metal band which somehow reminds me on the days when Floridian Death Metal was having its heydays. It’s not easy to find bands these days who still have this typical sound which got incredibly popular back in the days through studio Morrissound. KOROIDIA have released 2 EPs so far which are definitely worth checking out and very recommended. This interview was done with bassplayer Yasser Morales.


The roots of Koroidia go back to 2 other bands. Yasser and Ralf played both previously in HIBERNUS MORTIS. Adrian played previously in WARRICK. How do you look back nowadays at these first bands and these first steps? 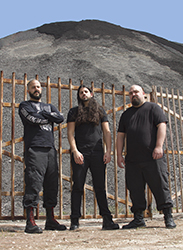 “In retrospect, I think all songwriters / players look back at their previous works with a sense of nostalgia. For myself, that nostalgia was bittersweet. While in HIBERNUS MORTIS, I was granted the opportunity to be a part of a brotherhood that my previous projects had not been able to bestow upon me. During this time, I grew as a bassplayer and a songwriter. HIBERNUS MORTIS gave me the opportunity to support touring international and national acts and help me turn into the player I am today. However, my time with the band would come to an abrupt and sudden end. Although, I still look back at my time with HIBERNUS MORTIS as a positive journey full of experiences and personal growth that would eventually lead to the formation of KOROIDIA. I’d like to add that I would later rejoin the band (HIBERNUS MORTIS, 2015) to start working on new material.”

KOROIDIA was formed in 2013. What was the biggest motivation back then to start with a new band? Did you have the feeling that HIBERNUS MORTIS and WARRICK were moving in musical directions which you didn’t like? Was it clear from the beginning in which direction you wanted to go with KOROIDIA?
“After my time in HIBERNUS MORTIS, I went into a deep hibernation of a sorts (laughs). While I was ‘napping’, I decided on getting my personal life back into shape, but eventually like many of us who had a ‘taste’ of the stage, I started to feel that unyielding call to return. Ralf and I started KOROIDIA with a clear-cut goal of putting out good honest legitimate Death Metal. HIBERNUS MORTIS always had a much more North Eastern (US) Death Metal influence. KOROIDIA on the other hand managed to capture the essence of many of the early Florida bands with hints of European flavors as well.”

KOROIDIA is the Greek word for mockery. Why did you decide to go for a Greek word since you’re an American band?
“We felt the name had to represent the band well and still contain some mysticism to it. The theme of our music for the most part is blaspheming or mocking of organized religion. KOROIDIA – which stands for mockery in Greek – was simple and to the point. We felt it represented us well.”

So far, you released 2 EPs. I think it’s rather fair to say that you can hear a lot of Florida influences in your music. I mean, your songs often remind me on MONSTROSITY with maybe some BRUTALITY thrown in there as well.
“That’s definitely a compliment! Those two bands as well as MORBID ANGEL, DEICIDE, OBITUARY and many more played a big role in our sound. The influence is present, but one thing that I’d like to point out is that Ralf and I never sat down to write music with any intention to sound like any particular Florida Death Metal band, nor did we intend on paying any obvious homage to them. The influences that come across in our music stems from our passion for the genre and not our geographic location.”

Your first EP – “Wrath Abomination” (2015) – was released as a CD by Ceremonial Records who are quite known for their work for BRUTALITY. How do you look back at this first release nowadays? How did you hook up with them?
“I am very proud of our first release. Ralf and I put those songs together over the course of about 4 months. We took our time with each of those songs and made sure we put out music we’d be fans of ourselves. No riff or lyric is a filler, every song stands on its own and that’s something I am immensely proud of. In regard to Ceremonial Records. I’ve been a huge fan of BRUTALITY since the early nineties and was in contact with Scott Riegel via Facebook for a while. If I recall correctly KOROIDIA was playing a gig in Tampa, Scott came out and we played him a rough copy of the EP. He and Jeff Acres – who was also crucial in putting together Ceremonial Records – liked what they heard and were interested in pressing it. We are eternally grateful to those guys and the label. We’ve had nothing but total support from them and feel honored to be a part of their legacy.” 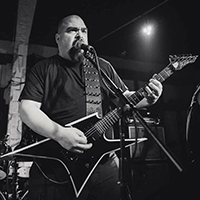 Your second EP – “Apparitions” (2016) – is only available digitally and as a cassette. Why wasn’t this released on CD or even on vinyl? Would you say that you progressed a lot as a band on this EP?
“Our EP “Apparitions” wasn’t originally intended to become an EP. Those songs were actually going to be on a full length album. We changed our mind and decided to record the songs and shop it to labels. We had initially offered it digitally via our Bandcamp page, but then Kosta from Repulsive Echo Records from Greece showed interest in releasing the EP and it was pressed as a limited, hand-numbered (100 copies) cassette release. In terms of progression, I feel the band took a darker turn with “Apparitions”. Each of the songs once again stand on their own and show a much deeper execution of songwriting.”

I came across your music through Bandcamp. Would you say Bandcamp is a good platform to promote your music? Do you often get reactions from people who checked out your material on that website? 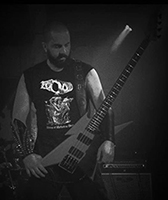 “I grew up in the tape-trading days! That’s how we discovered new underground bands back then. It was worth paying for expensive postage to places like Europe, Asia and South America and correspond with bands via snail mail, if it meant you could listen to new music this way. The internet has made the exchange of music drastically easier. In the nineties, there were a few of us that hung out on IRC (Internet Relay Chat) in a chatroom called #Deathmetal. I was lucky enough to be a part of this small but emerging world of internet Metal culture. With this tool, I was able to exchange music (albeit painfully slow) with members of bands like David from BEHEADED (Malta), Leon (then EXHUMED / now NAILS), and many more. Is Bandcamp a good platform? I’d say ‘Hell yeah!’. There are many websites bands can utilize, but Bandcamp is perhaps one of my personal favourites. Especially when it comes to the financial gains for bands. It allows us to keep a bulk of the money from digital sales. It’s hard to tell where fans find our material. We have all our stuff on cdbaby.com, which in turn gives iTunes, Amazon, Spotify, access to our music.”

You come from Hialeah (Florida). Florida is known for many great Death Metal bands like MONSTROSITY, DEATH, HATE ETERNAL, DEICIDE, MORBID ANGEL, OBITUARY and many others. Are these also bands you listened to when you grew up? Would you say that there’s still an interesting underground scene in Florida these days? Are there any bands you’re in touch with and that you can recommend?
“Absolutely! We are huge fans of the Florida bands! Randy Piro – who played bass for HATE ETERNAL – is actually the second guitarist for HIBERNUS MORTIS and has his own killer project, ORBWEAVER. Florida has always been a hot bed for Metal and we feel fortunate to be a part of this scene. South Florida – where we are from – is about a four hour drive south from Tampa and is home to bands like HELLWITCH, MALEVOLENT CREATION and SOLSTICE. Growing up with these bands in your backyard and the Tampa bands has been a surreal experience, that many young Metalheads don’t get to experience. The underground down here is absolutely thriving. Some of my favourite bands down here are ORBWEAVER, FAETHOM, SHROUD EATER and CAVEMAN CULT. All of them are unique in their own right and all of them do a stellar job of carrying the flag of Florida Metal high. It’s a tight-knit community down here. Our good childhood friend Chris Placeres (CALIGVLA / ex – THRASH OR DIE) is an ultra-talented artist and is responsible for all our artwork, CD-layouts and t-shirts. His brother Cesar Placeres (HIBERNUS MORTIS / ex – THRASH OR DIE) is a master in audio engineering and mixes / records all our music. It really is a family down here and we are immensely lucky to be a part of it. I think that there is a tremendous resurgence of great young Death Metal bands now more than ever. Some of my personal favourites are CEMETERY FILTH, CHURCH OF DISGUST, BLOOOD INCANTATION, ECTOVOID, ASCENDED DEAD, GARROTED and CHTHE’ILIST. Dark Descent records from Colorado (US) and Unspeakable Axe Records are two labels in the underground you definitely should keep an eye on. Both of them are responsible for putting out some of the bands I mentioned above and many more.” 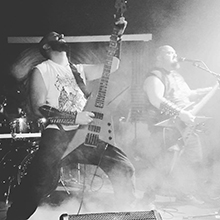 On YouTube you can find footage of a gig where you supported DEICIDE and OBITUARY. Are you often able to open for rather known bands? Would you say that you’re a good live band?
“We’ve opened for a few national bands, DEICIDE is one of them. GOATWHORE, INCANTATION, INQUISITION, BRUTALITY and GRUESOME are some other notable acts that we’ve been lucky enough to share the stage with. I do think we’re a strong live band and we do play out quite a bit. Maybe a bit too much if you ask me (laughs). In terms of highlights, I am proud that the band has executed two East Coast tours in it’s short existence and acquired an endorsement from B.C. Rich Guitars.”

Were you ever over in Europe with your band? Are there any plans to come over to Europe to support your EPs?
“We’ve never been to Europe, but that’s definitely something we want to do sooner rather than later as we have quite a bit of fans in the UK, Germany, Spain and Sweden who have bought merchandise from us. It would also be a great opportunity to make new fans. Nothing would please us more than an opportunity to play in Europe.”

What are your current future plans? Is there anything new you’re working on?
“Write, write and write! We currently have three new tracks and are going to scale back on local live appearances to concentrate on putting out a full length album. We’re also in the very very early stages of planning a West Coast tour of the United States. Thank you for reaching out to us!"