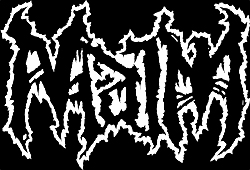 Yeah sickos, here comes another rotten and vomit spitting bastard for all followers of the new wave of “real” Death Metal. When your banner of impure Death Metal is labeled with bands like REPUGNANT, TRIBULATION, KAAMOS & Co. then make sure to have the next morbid desecration with MAIM’s new album “Deceased To Exist”. Collector hearts might already be familiar with the band’s AUTOPSY worshipping debut “From The Womb To The Tomb” (2009), but regardless if you know it or not I can assure you that the new material beats the shit out of their older recordings. MAIM did their homework in Death Metal, so feel free to read this rotten conversation with guitarist Scott… 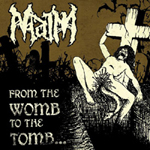 Scott, let’s start this question massacre with a tricky one: what makes MAIM special in this current massive wave of oldschool monsters from Sweden? Are you afraid that some sickos might just see MAIM as next copycats of the originals REPUGNANT, KAAMOS, SERPENT OBSCENE or follower bands like TRIBULATION or NECROVATION!?!
"Hi there! I guess we are a bit to humble to say that we are anyway special from other bands, especially when you’re mentioning mighty bands like REPUGNANT and NECROVATION. But every band has its own way of dealing with the label oldschool Death Metal I guess. We are currently very inspired by bands such as old NAPALM DEATH for example, which I think shines through on “Deceased To Exist”. So if I would have to mention something that makes us a bit different from bands such as TRIBULATION for example that would be that we don’t have this eerie TREBLINKA kind of approach. We are probably looking more to the American scene!!!" 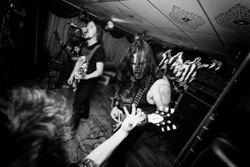 BASTARD PRIEST, MORBUS CHRON, MIASMAL… the list seems to be endless, so do you feel a sort of competition between all those “new” bands in Sweden who mainly apply to the same audience? I guess a lot of those current oldschoolers are such kind of friend bands of the same age to you, right!?!
"No we don’t feel any competition what so ever. It’s just fucking great that there are several bands within the scene that basically play the same kind of music. It just makes us all stronger and better. And yes, we are good friends and basically the same age with people from all the bands mentioned! Edde and Robba of MORBUS CHRON are a bit younger than the rest of us, but the teens from hell certainly know how to keep their Death Metal dirty!!!"

Let’s have a retropespective view on MAIM’s debut “From Womb To The tomb”! It’s known that it ended up as another “band of the week” release getting flowers by Fenriz from DARKTHRONE, but what’s your personal and self-critical view on the album? I mean it got released on vinyl as well and you’ve did some shirt designs on your own, too, so which country proved to be the most MAIM supportive in the end?
"We still like the “From The Womb…” album a lot. But’s the songs were more or less patched together to fill up the full length format, so I guess it maybe would have been a bit more wise in retrospect to maybe release a 10” or two or three 7”es. But it doesn’t really matter now. As said, we are still digging the album! When it comes to country I can’t really say, but maybe Germany and here in Sweden. The Germans truly love their Metal!" 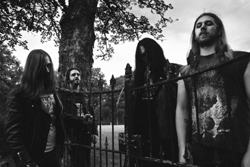 For me personally I think that the new album “Deceased To Exist” is in all aspects the better release from the MAIM camp! First of all the production, which is more brutal and meaty on one hand but on the other more professional without loosing the indentity of this way of Death Metal. Second the songmaterial itself is far more matured, more in-depth and more flowing then on the debut. Last point to add is that the artwork itself looks also a lot more stylish then the primitive oldschool vibe from the debut (I hope that Erik of WATAIN, who did those arts, won’t sent a curse on me for that statement). Seems like you’ve did a lot of homework, ha! Please tell us more about the developing process itself!?!
"I can agree to everything you just wrote actually and that is all and all why the album is a lot better as well. We had a clear idea of what we wanted to do from the beginning and we wrote songs with the album in thought. It’s simply a better mix between slower and faster stuff. The balance makes it more interesting as a whole. Most of the songs are pretty new but the opening track ‘Gravedigger Sacrifice’ for example has been with us more or less since the “From The Womb…” ." 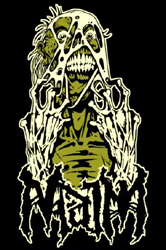 When have you actually finished the recordings of "Deceased To Exist" and how long did it take Soulseller Records to fix the final release? This label has done some cool releases so far, but it’s also known that, for example, the release of REPUGNANT’s full length album got fucked up with a massive delay. What can you say? To me it seems like the promotion got much better with the recent releases of MAIM and REPUKED, could you agree!?!
"Soulseller is a small label and they haven’t been around for that long, so I guess that is one reason why things have taken some time before. We are totally satisfied with the way the new release worked out though. Everything went smooth as hell. We recorded the album in July 2010 and the mixing and mastering part took most of the fall. “Deceased To Exist” was released in Februrary 2011, which is in perfect time schedulewise. The promotion is also a lot more organized this time!!!"

It seems like you have some cool bookings outside of Sweden for 2011 like festivals in Norway and Germany, especially Hell’s Pleasure festival could be the right place for MAIM to conquer. Are you hungry for more after leaving Sweden just once for the Killtown Festival in Denmark in 2010? I guess it’s time to check some new brands of beer abroad, ha!
"We have actually done a small tour in Holland a couple of years ago so we have played outside Sweden before (ok, so I might have not done my homework for this interview properly, ha! – Ralf). But of course we are hungry for more!!! Especially since we are so damn satisfied with the way the new album came out and the positive reactions to it!!!!" 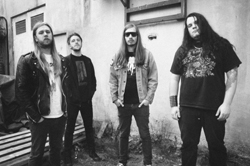 I know that you played the Gothenburg Deathfest also so far, which has always some more technical US styled Death Metal bands in the billing, so what’s your point of view on this more technical, more brutal, more complex way of competition!?! I mean it’s obvious that MAIM is more or less about the prime time late 80s / early 90s Death Metal roots, but what do you think about the more blasting style of Death Metal?
"Well, I can’t really say much about that!!! Gothenburg Deathfest was certainly not our forum and we did a really fucked up gig that evening. The venue was shit as well, so we pretty much packed our stuff and drove the five hours drive home straight after the gig!!!"

Another typical style thing for MAIM is that you use a hell of reverb on the vocals instead of the classical growling Death Metal vocal style. I often think that this adds a certain kind of evil twist to this sound coctail, which is more similar to POSSESSED and the general wave of late 80s extreme Metal. In the end what’s your intention behind it? 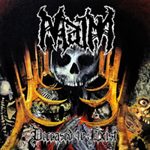 "As you said, it mystifies the whole thing and brings the (if you like to call it) “theatrical” approach to another level, which sort of weights good with the more brutal and direct wall of sound."

Ok Scott, thanx for joining the madness! If there’s anything we might have forgotten to say about MAIM, feel free to add it now
"Thanks for the support and Death to posers! Also fuck sexism, racism and idealism!!!"

* Please note an extended version of this MAIM interview will be published in the upcoming issue #16 of MYSTICAL MUSIC fanzine.