For the last 15-20 years, despite it’s obvious saturation, Death Metal has been thriving. And even though it has evolved in many different branches and styles, finding a real, honest and organic approach to Death Metal has become harder and harder. Enter METAPHOBIC. A band formed in 2018 and based in Atlanta, Georgia (USA). Their “Demo 2021” was an amazing slab of pure and unadulterated Death Metal that way it was meant to be played. Peter Lai (guitars) and the rest of the band were kind enough to take their time and answer some of our questions on METAPHOBIC’s past, present and future. Read along and enjoy.

I wanted to skip the usual “when and how was the band formed”, but looking into it, I found out that METAPHOBIC has members and ex – members of Atlanta based bands such as HOMICIDAL, PALADIN, MALFORMITY and MORIONOR. These bands played Power Metal, Thrash Metal, Death Metal and melodic Black Metal. So, the question is, how 5 guys with such a varied musical background came together to play completely unadulterated crushing Death Metal? Who was (were) the founder(s)? Did you meet before in other bands or you just ask around for members? Who came up with the name and what exactly does it mean?

“We all knew each other from the scene and some of us had jammed once or twice in the past. Originally, Shawn, Nathan and Danny were in CESSPOOL with Josh, who had just reformed the band. They needed a bassist, so Peter jumped on board. Josh decided to leave shortly after the first show with the new line-up, but the rest of the guys decided to keep going as a new project. Peter moved over to guitar, his main instrument and we put out the word we needed a bassist. Dan from MALFORMITY was one of the people who we jammed with and ended up being our bassist. As for the name, it came up during a conversation on the way to a show. Peter and our friend Cody were talking about phobias and the name METAPHOBIC popped up. It sounded like a solid band name so we went with it. If you want to assign some sort of meaning to the name, it could be “fear of the beyond” or something similar.”

I cannot stop listening to your Demo 2021. These 3 songs are not only perfectly crafted, but they also took me back instantly to that time when I discovered Death Metal (1987. Yes, I am an old fart). They sound familiar and massive, yet so fresh in today’s underground. I mean, the last decade has brought an infinite number of bands playing lo-fi, reverb drenched, cavernous Death / Doom. And that trend has somewhat overpowered all the other amazing bands that come up with brilliant music such as METAPHOBIC. So, how did you come up with these songs? Is it a group effort or are there main composers for music and lyrics? Also, what made you decide on playing and developing your own style? 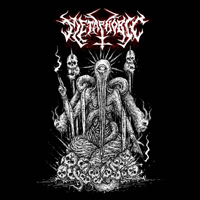 “Thanks for the compliments. For the EP and upcoming full length, Peter wrote all the riffs and rough versions of the arrangements then brought it to the band to jam and make adjustments, whether it’s changing a riff, adding variations / harmonies, or changes to the arrangement. Danny then writes the lyrics once the music is finalized. There wasn’t necessarily a conscious effort to play / develop our own style. Since Peter’s riffs are the foundation we build on, our music is just the natural result of Peter’s way of playing.”

You recorded the demo at Second Sight Sound studios back in July 2020. Right in the middle of the Covid 19 pandemic. Did this affect the band or the timeline you had for recording? Do you have stories or anecdotes from your time at the studio? Why did you guys pick Second Sight to record? Did you know Alex Parra (owner and engineer) from before?
“Yeah, Alex is a friend from the local scene who also plays in PALADIN and SADISTIC RITUAL. Peter worked with him before for his other band OBSOLESCENCE, and Dan worked with him when MALFORMITY tracked vocals at his studio. Nathan plays with Alex in PALADIN and Shawn used to play with him in SADISTIC RITUAL. Recording can be stressful in itself, but Alex is easy to work with on top of doing an amazing job making us sound great.”

Your 2021 demo was released on CD by Everlasting Spew Records from Italy. And I noticed both, the digital and the CD release have the same date. Does this mean the band and the label had a deal before the actual recording took place? Are you satisfied with the work of the label? 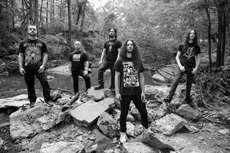 “We did not have a deal before the recording took place. Everlasting Spew reached out to us shortly after we released the demo on our own Bandcamp. We’re happy with how well they’ve pushed the demo.”

So far, how has the underground responded to your demo?
“Response seems positive. We’ve had great crowd response in the few shows we’ve played and we haven’t seen any negative reviews of the demo as of yet.”

Have you had more digital downloads than CD sales? Are there any offers for your demo to be released on vinyl or tape? Speaking of which, what’s your opinion on the sudden rise of physical formats such as vinyl and cassette tapes?
“There’s been talks about getting the demo released on tape this year, but nothing has been confirmed as of yet. The return of vinyl and tapes gives people more options for how they want to consume music and that’s a good thing.”

Which are your main influences? Not just music-wise, but overall concept? What is your main goal when coming up with new material?
“There are the obvious influences like GORGUTS, DEMILICH, IMMOLATION, etc, but we pull influences and inspiration from everywhere. Unfortunately there’s no grand design here. Music is enough. We just want to make the best songs we can.”

Nowadays gigs and concerts are picking up again. Have you played or do you have plans for gigs? Also, how’s the Atlanta underground scene?
“We’ve played a couple shows since venues have started hosting bands again, but for now, we’re going to be focusing on our upcoming full length. The Atlanta scene has always been very supportive of underground Metal. Everyone knows everyone and we’re all very supportive of each other’s projects which is easy when everyone is putting out awesome material.”

What can we expect from METAPHOBIC in the near future? What are your upcoming plans?
“Right now, we’re working on getting the full length together. We’ll be going back to Second Sight again early this year. And of course, there’s the possibility of a tape release for the demo.”

I can’t thank you enough for your time. I hope these questions were interesting and fun enough for you to answer. I look forward for new stuff from METAPHOBIC (please!). The final words are yours…
“Thank you for giving us the time!”