Even though the band is long history already, Sweden’s MORBID more and more established themselves over the years as a cult act with only one official demo ("December Moon") released back in 1987… Part of the reason most certainly is the fact that their vocalist at the time was no other than Per Yngve Ohlin (better known as "Dead"), who quickly became an icon as a member of Norway’s MAYHEM and even more after he committed suicide! What a lot of people seem to forget is that also Lars Göran ("L.G.") Petrov and Ulf "Uffe" Cederlund (nowadays both to be found in ENTOMBED) started their career in this legendary act… The latter was also responsible for the following interview answers, that Laci confronted the guitarist recently with… 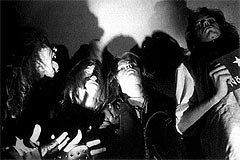 How old were you when MORBID was established? By whom, when and how was the band formed? Which bands have had an effect on you?
"I was a kid (16) back then. I guess it was Dead and a guy called Slator that formed the band sometime around 1986. I was the last guy to join the band after a lot of guitar players. I was just the guy that ended up playing on the demo and did some final arrangements of the songs… I guess we were into bands like CELTIC FROST, MERCYFUL FATE and BATHORY back then."

What did the name of the band mean? What was the line-up of the band?
"It was Dead who came up with the name. I guess he got it from CELTIC FROST’s "Morbid Tales" EP. The line up was: Dead – vocals, Dr Schitz – bass, Drutten – drums, John Lennart – guitar and Napolion Pukes (me) – guitar. Some earlier guys were: Slator – bass, TG – guitar and Klacke – guitar." 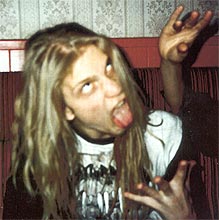 How often did you rehearse? How were your rehearsals? Did you play own tunes or covers too?
"We rehearsed a couple of times a week. We were pretty serious when we rehearsed, didn’t get drunk or whatever. We never did any covers at all."

By whom were the lyrics and the music written? Who were the main songcomposers? What were the lyrics all about?
"Dead wrote the lyrics. I don’t really know what they were about, sorry. I guess me, John Lennart, Klacke and TG wrote the songs. Mostly the basics were written by TG." 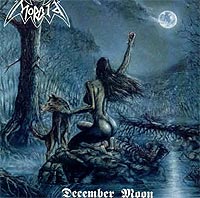 In 1987 you recorded two demos "Death Execution" and "December Moon"… Please tell us detailed about these tapes! Which songs were on them? Do you still remember about the recordings?
"MORBID only did one demo. "Death Execution" is a rehearsal tape. I didn’t play on that one. "December Moon" got ‘My Dark Subconsious’, ‘Wings Of Funeral’, ‘From The Dark’ and ‘Disgusting Semla’. We saw that other bands sold their demos at this record store in Stockholm so we thought why shouldn’t we do that as well. Sandro from the band MEFISTO introdused us to the guys in HEAVY LOAD who had a studio and they gave us a good deal. The hole thing took about 16 hours. We were amateurs so we just let the studio guy control most everything really. We didn’t really send out the tape so much. It seems like this recording grew when Dead died, which is sad." 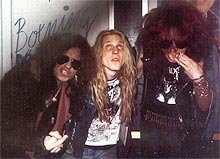 As far as the fanzines of that time, which ones do you remember? Were there many fanzines? Did you often give interviews?
"The first fanzine that wrote about MORBID was Slayer Mag. There was a lot of zines around but the one I remember is Slayer Mag."

Did you become popular or known in the underground scene? Did "Death Execution" draw the fans attention to the band?
"We were never popular. We had some friends that supported us at the few shows MORBID did. This was before the Death Metal thing got big overhere. We played with a band called TRIBULATION a few times. Magnus (drummer) got us all into a bunch of cool stuff later." 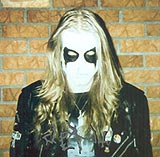 Your third demo was "Last supper” (1988). What must we know about this tape? Did you progress compared to the previous demos? To what did the title of the demo refer to?
"I don’t really wanna call this a MORBID tape. The real MORBID was already broken up. We were three from the band who kept on playing and we didn’t really find a new name. My regrets! I guess MORBID kind of died when John Lennart quit the band. It was hard to find another guitar player and then MAYHEM asked Dead to join etc."

How was the Swedish underground scene at that time? Which bands were active? Did you take part in the tape trading?
"When MORBID was around, bands like MEFISTO, CANDLEMASS, TRIBULATION… NIHILIST were just about getting together, I guess. I got into the tape trading thing a bit later like 88. We had like 100 bands going at that time… NIHILIST, CORRUPT, BRAIN WARP, etc. It was Magnus from TRIBULATION who got us into a lot of the cool stuff like DEVASTATION (IL), MASTER (IL), REPULSION, etc." 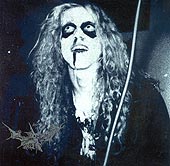 In your opinion, why did Death Metal become so strong in Sweden?
"It was not really strong in the old days. We were a bunch of outsiders who didn’t belong anywhere. We hated school and to work. In these days it was not all about Death Metal. We were into old Hardcore Punk bands also. I guess the reason why it turned out to be NIHILIST / ENTOMBED or the Death Metal thing was that’s what we got the biggest support from. People seemed to like that stuff. The Death Metal thing exploded in like 1991."

How often did you play live? How were the early MORBID shows? How must we imagine them?
"MORBID only played like 5 or 6 times live. It was real hard to get gigs. All the shows were at Punk squats kind of. They were the only ones that put up with it. MORBID was not a Jeans and T-shirt band. Dead wanted everybody to have an alias… He wanted to put on a show. It was hard of course cuz the band couldn’t even fit on stage. At one point we had a coffin for Dead. But we had to put it behind the stage. He was still in it before the show. Weird?" 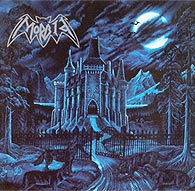 Was MORBID a Black or a Death Metal band? Were there borders at that time between Death and Black Metal?
"No one talked about if its Black or Death back then. We played some kind of Metal, that’s it really… maybe Dark Metal?"

As far as I know, Dead was the first person who used corpsepaint… What was the importance of using corpsepaint? Does the use of corpsepaint belong to Black Metal?
"I don’t think he was the first guy… He was early but… (HELLHAMMER, MERCYFUL FATE etc. were a lot earlier with this already – Frank) Like I said… We never thought we played Black Metal… that was VENOM back then. This Black Metal scene came years later."

How would you characterize Dead personally? What kind of guy was he? Why did he commit suicide?
"He was cool to hang out with, always something weird to talk with. I remember him as a nice guy, really. I think he died cuz he was not happy! I don’t believe in this thing that he wanted to join the other side or whatever. It’s always fucked up when someone kills him/herself. It’s fucked up!"

As far as I know, his pattern was Attila Csihar the singer of legendary Hungarian act TORMENTOR, wasn’t he? Did you know this band?
"I just got to know Attila when I booked SUNNO)))) here in Stockholm. He is a nice guy! I’ve heard TORMENTOR, but a long time ago. I don’t know about a pattern. I think it was cool that he sang in MAYHEM after Dead. I love his vocals and personality."

Why and when did MORBID split up? Why did Dead join MAYHEM? Were you in connection, in friendship with the Norwegian bands at that time?
"John Lennart left the band and it was hard to find some other guy. We didn’t know what direction to write new songs in… I guess Dead thought that this was it and fuck it, you know! Let’s go to Norway whatever. I never knew MAYHEM. I only met Hellbutcher once like 3 or 4 years ago. He seems cool. Too much fucked up things happened to that band. It’s sad really!"

In 1997 "Live From The Past" was released… Whose idea was to release this record? Was it an official release? Do the fans often search for MORBID songs, releases?
"I don’t think there are any official MORBID releases. I havn’t been involved with it anyway. Too be honest I don’t give a fuck! I would rather have seen this as something for people who were around back then. They know what MORBID was all about. All this legend shit is fucked up! It was the first proper demo all of us ever recorded. It was not meant to be killer or whatever. It was for us that we did it."

In 2000 both "December Moon” and "Live In Stockholm" were released… What could you say about this material? Why was "December Moon" re-released? Was it originally a split release?
"I wish I had got a copy at least…"

What’s your opinion about the soundquality of the live stuff? Was it remastered and remixed?
"I just hope that whoever put this stuff out is doing the best… so it’s not a rip off. Well, they rip us off anyway… whatever."

In 2001 "Death Execution III" was released. Are there any unreleased songs on this or was it brandnew MORBID stuff?
"I have NO IDEA about this, sorry."

Why didn’t you get offers from labels at that time? Weren’t they interesting in the band?
"I think we sent out a few tapes but didn’t even get a reply. The basterads thought we sucked I suppose. I don’t think it would have worked out anyway if we put out on album back then. We didn’t have enough songs for one."

In my opinion, you were a cult band, do you agree with me? What does it mean for you to be cult, to reach a cult status?
"I don’t think MORBID would be cult today if Dead hadn’t died. For some weird reason people think stuff like that is cool or whatever. But of course I think it’s great that people like something I was a part of for a minute so many years ago. It feels strange. This was when I skipped school and was 16 years old, you know. A kid that young doesn’t think about this stuff."

Do you often listen to the MORBID demos nowadays? What do you remember about the career of MORBID? If Dead would live, would you reform the band?
"It happens that I put my old tape on. It’s mosly Peter (drums – ENTOMBED) who put it on sometimes. He got it on CD. It’s always fun to hear. I get surprized that I actually play on it. I’ve recorded much worse things after that. I just kind of joined MORBID, did a show, did the demos and then we broke up. I don’t think we would have reformed the band but I think that we should have done a few more shows. That would have been a lot of fun anyway!"

Uffe, thanks a lot for your answers, I wish you all the best and good luck.