This is one of the shortest – if not THE shortest interviews in the history of VOICES FROM THE DARKSIDE. But don’t let yourselves fool by the rather short answers of MORRIGAN’s drummer Balor, because musically the band is just amazing! If you still remember MAYHEMIC TRUTH you will already be aware of what to expect from these guys, cause MORRIGAN is musically exactly in that vein and kinda like the logical follow-up of the two MAYHEMIC TRUTH founding members Beliar and Balor… For further details on both their albums, check out our review section, cause here comes the interview…


I guess before we talk about MORRIGAN, we should go back in time a little and clear up the dust why you decided to lay MAYHEMIC TRUTH to rest after all?
"Beliar left the band in summer ’97 and then also the chapter Mayhemic Truth was closed…"

Considering the attitude you had back then (“only limited vinyl would be of interest…”) I was kinda surprised to see a CD release by MAYHEMIC TRUTH, even if it was just a farewell release. So, what actually changed your minds to agree to this?
"There exist bootlegs of the 7” EP and the Demo ’96 and also we do an offical re-release on Iron Pegasus Rec…"

I never really found out why you didn’t use the entire MAYHEMIC TRUTH recordings for that record, but only the “Cythraw” 7” and Demo’96?
"The reason why the older stuff wasn’t on the record was, that Costa thought, that the sound of the Promotape ’96 and the unrelased tracks from this time was too bad…"

The vinyl and picture disc version of “In Memoriam” is supposed to feature a bonus track – is it the same track on both version? Which song is actually on there?
"On both vinyl relases was the same bonus-song: ‘Long Forgotten Cries’ from the Promotape ’94."

After MAYHEMIC TRUTH you played and recorded with BLIZZARD for a while… Please introduce that band to all those who aren’t familiar with them yet and also why you split-up after a while again
"Blizzard is history! The band played dirty Heavy Metal in the vein of Motörhead, Venom, WarFare… and split up after a gig with the Japanese Abigail in October last year…" 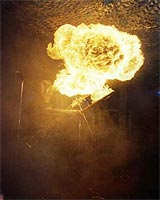 As far as I know you also used to help out WITCHBURNER for a short period of time, haven’t you? Tell us more about that
"I played in Witchburner for one year and we did the recordings for the split 7”EP with Witchburner and Blizzard together. I left the band in the end of 2000."

What has Beliar been up to ever since the MAYHEMIC TRUTH split?
"He did some medival music on keyboard and acoustic guitar for himself…" 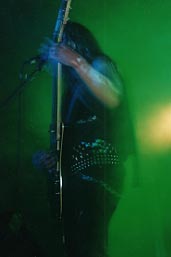 To me, MORRIGAN is musically exactly along the same lines as MAYHEMIC TRUTH was, which means you still compose material that is heavily influenced by classic BATHORY… So, where do you see the main difference between MAYHEMIC TRUTH and MORRIGAN then?
"We think, that Morrigan is just in line with the old MAYHEMIC TRUTH"

Musically you are always on the edge between BATHORY’s raw “Blood, Fire, Death” record and the epic “Hammerheart” release – so, do you like both styles in a similar way or do you prefer one over the other a bit more?
"I / we like all Bathory periods between 1984 and 1991."

How about the lyrical side of the songs – what are your new songs dealing with in general?
"Our lyrics deal with the same things as in the times of MAYHEMIC TRUTH: the Celtic and Germanic mythology…" 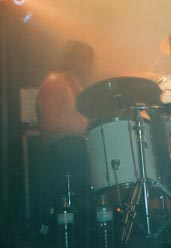 You already released two brilliant full length CD’s on Barbarian Wrath (“Plague, Waste And Death” in 2001 and “Enter The Sea Of Flames” in 2002) – but what have you been up to previously? I mean, did Barbarian Wrath offer you a deal straight away, without hearing a single note of MORRIGAN or have there been any rehearsal / demo releases before already?
"We know Opyros of Barbarian Wrath Records for a long time and all works on a friendship basis…"

You and Beliar have both been actively involved in the underground for quite a while now, so I was wondering how you judge its evolution? Would you say things have become more enjoyable / easy these days because of the internet and the countless labels that appeared on the scene or is it more the opposite maybe?
"I must really say, that the actual underground not really interests me…"

Have there been any releases / bands lately that still impressed you or is it mostly just faceless mainstream crap that floods the market nowadays?
"Not really…"

Do you actually still consider MORRIGAN a Black Metal act? Do you still wear corpse paint?
"Morrigan is no Black Metal band, but we still use warpaint." 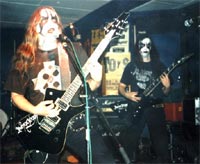 You mentioned to me in one of your last emails that you just returned from the “Under Black Sun” festival… Did MORRIGAN play there as well or did you just attend the festival for your own personal pleasure? What kind of impressions did you get there?
"Yes, we played there."

Even though you had quite an anti-commercial attitude when you were with MAYHEMIC TRUTH, you still played a bunch of live shows at the time… Did you ever regret that decision or was / is playing live for you enjoyable?
"Yes, playing live is still enjoyable for us."

Do you actually mind that not too many people are aware of your existence these days due to the very underground based distribution and almost non existing promotion of Barbarian Wrath? I personally for example would probably never have been aware of MORRIGAN if one of my contributors (thanx Edouard!) wouldn’t have mentioned your two CD’s to me
"The work of Barbarian Wrath Records is ok for us and it’s no problem, that they’re just an underground-label."

Ok, that’s all for now – feel free to give us a little update on the band’s activities here or talk about possible future plans
"Thanx for the interview!"