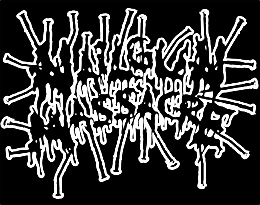 Old school Death Metal. Done right. What could be more tempting for a rotting zombie Metal maniac? So lately those bands have been springning all over the place, basically from all over the world you can hear many bands giving their tribute and playing old school Death Metal where feeling prevailed over technique. But you have to agree that while many of those bands should be respected for keeping the flame alive, only a few relaeses really stand out from the sea of mediocrity and kick some serious ass. And here comes in fucking NAILGUN MASSACRE with their debut album "Backyard Butcheries". These Dutch Death Metal zombies managed to cause quite a big stir in the Death Metal underworld and so without further ado I give the word to Corpsechucker of NAILGUN MASSACRE…


Hi! OK, since you sort of exploded into the scene and blown away many maniacs, can you tell how NAILGUN MASSACRE came into being? Have you played in other bands before?
"We are just a bunch of Death Metal freaks from Holland that like to hang out, drink beers, smoke weed and play tunes. We’ve all had our fair share of other underground bands and projects. Now we’ve joined forces to play the style we grew up with and which suits us best: old school horror Death / Doom Metal from the late eighties and early nineties. No bullshit. That’s NAILGUN MASSACRE."

How long did it take to write your debut album "Backyard Butchery"? Did you produce it yourselves?
"We basically did everything ourselves. The whole process of writing, recording and producing took about eighteen months altogether."

What is Incredible Redneck Hellcrew?
"Those are some crazy fuckers that form our roadcrew." 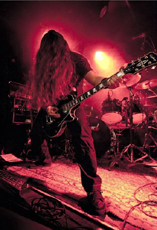 I’ve seen mainly positive reviews. Are you happy with the album and the way reactions to it are turning out?
"Doing everything ourselves we’ve had maximum control over the album. We are very pleased with the result. Reviews are excellent so far and we get loads of positive reactions from all around the globe. We absolutely cannot complain about the reception of "Backyard Butchery"."

Do you play live often? Can you see NAILGUN MASSACRE becoming a full on touring band?
"At the moment we play approximately once a month. Mainly at underground festivals and venues. The way things are going now I definitely can see us go on tour. But when and to what extend is something the future has to learn."

Why, in your opinion, has there been such a big ressurgence of old school Death Metal bands? Do you follow that scene? What are your recommendations, if any?
"Maybe because people are getting a bit tired of all kinds of modern developments in Death Metal. To be honest we mainly listen to the real old stuff like AUTOPSY, OBITUARY, DEATH, IMPETIGO, GRAVE, PUNGENT STENCH and so on. We try to stay close to that. To catch that late eighties / early nineties vibe as good as possible. You know, like "Backyard Butchery" could have been made in 1989." 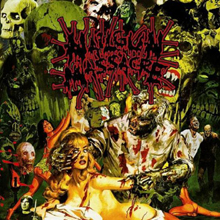 Holland has a huge amount of killer Death Metal bands and musicianchip level is very high. Why is that? Also what do you think of the following bands – HAIL OF BULLETS, PESTILENCE, SINISTER, GOREFEST and NEMBRIONIC?
"People here are not easily impressed, everyone seems to be in a band and there is a lot of competition. In such a climate bands simply have to be good otherwise they get ignored. Only the strong survive. I especially like the first three albums of SINISTER, first two albums of PESTILENCE, first album of GOREFEST but also SEMPITERNAL DEATHREIGN and of course ASPHYX."

What are musical tastes of each member? Are they very different? Do you have any democracy in the band?
"Only old school Death Metal. No democracy. No politics. No compromise."

Have you seen the "Lemmy" movie? Your opinion?
"Yeah, great movie about a great legend. Very entertaining stuff."

You worked with Paul Speckmann on your album where he sang on 3 tracks. How did that come about? Do you think that someone should make a movie about him or something, this guy is like a godfather of Death Metal!?
"Paul is a good friend of us. At the time we were recording "Backyard Butchery" he was on tour with MASTER and had a day off in Holland. He came to our place to hang out and he liked our recordings. Spontaneously the idea came up to let him do some vocals and he absolutely nailed it. The man is an underground legend. A documentary about him would be a massive movie for sure!" 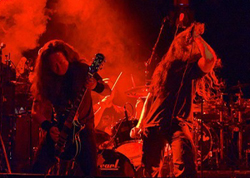 Tell us about Slowrunner Records. It was created for NAILGUN MASSACRE, but now you plan to release other bands, is that right?
"We wanted a dedicated underground Horror / Death / Doom label as well as full control hence the creation of Slowrunner Records. Thanks to "Backyard Butchery" the label is doing pretty well and indeed there are some plans for other releases as well as starting up a mailorder."

Why do you think old Death Metal bands are the best? Do you think it has to do with the fact that bands were writing memorable songs and not being very technical? What are your fave reunions from old Death Metal bands?
"The old bands were closer to the essence of what Death Metal is all about. And they all had their very own style. From then on the genre progressed, became more technical etc. but lost alot of feeling and uniqueness. Indeed more technique instead of memorable songs now. At this moment my favourite reunion is without a doubt AUTOPSY with a great new album and killer live performance."

Anything else to add? What sort of merchandise do you have for Death Metal craving rotting zombie maniacs?
"First of all thank you for showing interest in NAILGUN MASSACRE and conducting this interview. Anyone interested in NAILGUN MASSACRE should feel free to contact us anytime. We’re always hungry for gigs, trades, feedback or whatever. Check out our website for more details. We’ve got some merch available like shirts, hooded sweaters but also our album “Backyard Butchery” can be ordered there. Just remember: old school is the way to go, folks!!