French… the brutal way!!! Death Metal and France often bring the names of bands like MASSACRA, AGRESSOR, LOUDBLAST, MERCYLESS or MUTILATED. But this was a looooong time ago. These days, a brand new bastard shows its ugly head and feels ready to devastate everything in sight. If you die for the aggression of "The Awakening" by MERCILESS, if you could kill for the savagery of REPUGNANT, and if the darkness of Black Metal fuels your blood, the devilish incantations of NECROWRETCH shall appeal to your dark soul and damaged ears! Now behold the fiery pride of these French maniacs and listen to the vomit spawn by the mouth of Vlad, the mighty impaler, that sometimes happens to play guitar and puke into a microphone.


Hi Vlad! NECROWRETCH has now been signed by Century Media since a couple of months. But your album is only released now in January 2013. How have you been received by the audience, now that you have been allowed to play on pretty big bills. Did the signing to such a big label influence your writing or your recording process? 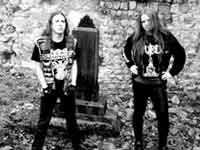 "Greetings from the crypt! Our signing to Century Media did not really have an impact on our writing process. When I compose, I generally lock my mind in an underground prison, and nothing can penetrate it. But when it comes to the recording of the album, I assume that yes, the signing did have an influence. At last, we could enter a professionnal studio for 10 days, and hence, we got a very powerful sound for NECROWRETCH."

You seem to be satisfied with the general outcome of your album. But, are there any "mistakes" you already sense, and that you would like to improve for the next album?
"It took me one year and a half to complete the writing of that album. You can say I would compose a track every 2 months. Obviously, I feel that the first tracks I wrote sound a bit weaker compared to the last ones. This is what I would like to improve for the next time. I think I’ll have to compose a bit faster, so that there’s not so much difference in the quality of the songs."

Old school Death Metal is pretty much the cool thing at the moment. Do you feel close to some new bands cultivating that old school vibe? For instance, I do not think that the new TRIBULATION album sounds so huge and inspired as so many people tend to think. What are the new Death Metal bands that give you the thrills at the moment?
"I am pissed by people talking about a so called "old school trend"!!! Look at the people who play in these new Death Metal bands. Most of the time they are the ones who sweat pure Metal of Death, wearing patches all over their old jackets, talking about Death Metal during hours… Do you think these people play this kind of music just to follow a trend? (not all of them, but I have seen some new bands without much substance… – Nathaniel) I think it is rather the opposite, and just like with NECROWRETCH, they are possessed by Death Metal for years, and they want to spread this music they love. I always loved TRIBULATION, their guitar works and writing skills. I think they’re an interesting band, and I like their evolution on the second album. I need to hear more! At the moment, I puke my guts in joy when I listen to the latest releases of bands like MORBUS CHRON, NECROS CHRISTOS, ASPHYX or MARDUK." 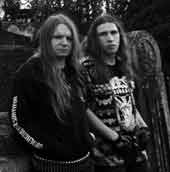 You used a session drummer called Mörkk on the album. Why didn’t you get Kev Desecrator instead, knowing that he plays drums with you on stage since months already?
"While recording our "Now You’re In Hell" EP, things went very well with Mörkk. So we offered him to drum on our album. Only a couple of weeks later, Kev Desecrator joined us on the drums for the famous gig we played with ASPHYX in Essen, Germany. He asked us if we would like to get him on the album. But at that point, Mörkk was already working on the tracks like a mad man. We didn’t feel like we would screw him, unlike some other people we know… So we kept Mörrk for the recording session of the album. And the result is very good. Now, Kev Desecrator had to adapt to Mörkk’s playing, and he did it very well. Sometimes he even changes some parts when he feels it is necessary."

You told me that the essence of NECROWRETCH can be traced in the darkness of the old MARDUK albums, and also in the aggression of MERCILESS, as well as in the dirt of REPUGNANT. Talking about some dirty, violent and crazy Metal, I assume that the texan horde RIGOR MORTIS was also influential for you. What do you think of Mike Scaccia’s passing on stage lately? Do you see yourself still playing like a professionnal musician when you reach his age? Would you see yourself die like him, by playing on stage?
"His death is really a loss that touched me. Without a doubt, the man was a great musician whose playing got Metal to evolve. Listen to the ultra speed riff in ‘Mummified’ and you’ll understand the impact RIGOR MORTIS had on many other bands. I discovered them in 2006. I remember I used to play the instrumental ‘Welcome To Your Funeral’ when I was waking up in the morning on a daily basis. And I do listen to it at this very moment as well. I was so enthusiastic when I heard they had reunited a couple of years ago. I wish I could have seen them on stage… I can’t read in the future, so I cannot foresee my death. But I do hope that NECROWRETCH will not die too early like so many bands."

Until now, NECROWRETCH used the artwork of Milovan Novakovic. Why leaving the black and white style from your former releases behind? I think that this new coloured artwork is the biggest letdown of the album (come on, say I am a jerk ! Haha!) I understand the will to stick to the hand made drawings or paintings, rather than the usually ugly photoshop style. But for a first album, I was expecting a less childish artwork.
"Asshole!!! (laughs) We are really satsisfied with the artwork. Once again we let Milovan have a creative free hand. And he surprised us once more! This cover should be read as a warning to the listener. It goes like ‘here’s what you’re gonna find if you listen to that record". The album is based a lot on necromancy, and in my book it fits with the green colour. If you read the lyrics in details, you will see that every title is present in the artwork. It was a way to show we do believe hundred percent in our music. Giving such connexions between the audio and the visual sides of things."

Talking about childish stuff… I remember the first time I saw you play with BLOODY SIGN and RÉSISTANCE. I got the feeling that you were like NIHILIST / ENTOMBED in the early days. Raging, insane, with a juvenile sincerity that nothing could kill. It was just a pleasure to witness. In the end, Death Metal is still a music very rooted in adolescence. What do you think?
"It also came to my mind. But you can tell, as you know us pretty well, NECROWRETCH went even more into the rage and the sincerity as years passed by. We are possessed by our music. And when on stage, I am convinced by every word my mouth does spew. We feel the urge to demolish everything when we play. The gates of hell have to open up and swallow everybody! Our music did evolve since our beginnings, and it will keep on doing so in the future. I hate to repeat myself, and I don’t want to do the same album twice. Maybe our rage will show a similar evolution. To make it clear, the day I feel that my rage is gone, I will stop the band!"

LOUDBLAST, MERCYLESS, MASSACRA, AGRESSOR, those are some French bands that used to sign contracts with big foreign labels, and got an international recognition. But it was a long time ago. What are the new French bands which deserve more recognition these days, according to you? Have you felt any jealousy against you since NECROWRETCH is signed on Century Media?
"I couldn’t care less about the existence of a jealousy. NECROWRETCH does play its own putrid brew of Death Metal. If people like it, fine! If they don’t, we don’t care! It will not taint either our vision of music, or our need to play it to the maximum. I like some French bands a lot: EVISCERATION, RITUZALIZATION, AFFLICTION GATE, CADAVERIC FUMES, PERVERSIFIER…"

"To those who think NECROWRETCH will change their music: Fuck Off!". Nice statement I could read in a studio report dealing with the recording of your first album. Ok, but how do you see the future of the band without evolution then?
"It was first and foremost a big fuck off to some bullshit we heard after the signing to Century Media. We’re not selling out because we’re on a big label. By no way we’re going to start an easy listening band. ASPHYX is a perfect example. The music of NECROWRETCH does evolve and will continue to do so, but it will always be bestial and without compromises."

Alright, I leave you at that for the moment. Good luck and all the best for the future.
"Thanks a lot for your support since our very beginning! Prepare yourself for horrible doom!!!"