I haven’t heard a Death Metal album as unique as the latest CD "Black Seeds of Vengeance" by the American four piece NILE lately. So at their tour with THE FORSAKEN, CARNAL FORGE and THE HAUNTED (who had just won a Swedish Grammy Award – click here for further details) I took the opportunity of talking to NILE’s guitar player and vocalist Karl Sanders in Hamburg. Unfortunately something went wrong between the record company and the tour manager, so nobody was prepared for doing an interview. Another problem was that Karl was sick that day – still he did not only play the whole set with his band but also replied to my questions, so thanks a lot for that. As there are very good explanations of the lyrics of the new NILE album included in the booklet, there was no point in talking about that very much. Usually I’m interested in a band’s past, so I started torturing him with that. 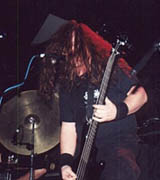 When and how did you get hooked to Heavy Metal in general, was it a concert, a record or maybe a friend who introduced you to it?
"As a child I guess I grew up with LED ZEPPELIN and BLACK SABBATH and later came JUDAS PRIEST and IRON MAIDEN and SLAYER, probably the same way many people started with Heavy Metal."

Where you come from, is there a Metal scene around, can you play concerts with other bands there? Are there any bands we don’t know yet but who should be supported?
"No. No, it sucks! It’s terrible!" 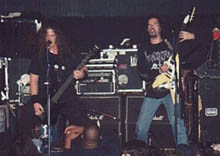 Where does this fascination about ancient Egypt come from, what do you like so much about this topic?
"The epic grand scale, the ancient brutality, the mysteries of the ages…"

When forming NILE, did you already have this vision of how you would like to sound or did this develop over the years?
"When we started NILE we weren’t quite sure what we were going to do, the ideas came to us gradually and we developed our concept over the years, like ’95/’96 we started shaping our sound."

Concerning the "Egyptian" sounds – is there anything authentic from that period of time and if yes, how did it survive thousands of years? (okay, I really didn’t expect this – Ramon)
"There are authentic recordings from 4000 years ago, yes! (laughs)"

So how is this sound inspired?
(Karl still seems to like this idea): "Well, yeah, certainly the ancient Egypts did not have electric guitars, bass drum, double kick drum, you know, they didn’t have all that, so I don’t think there ever was any ancient Egyptian Death Metal…" (well, maybe there was: the Marsians might have taught the Egyptians how to play Death Metal and then it survived thousands of years, or possibly the Marsians returned a couple of years ago, found out that mankind had forgotten how to play Death Metal and so they formed the first bands in order to teach mankind how to play good music again. Probably HELLHAMMER came from outer space, just ask John Cyriis, he’ll certainly agree – Ramon)

Come on, I mean these additional sounds and instruments – except for the Death Metal!
"The other exotic instruments we’re perhaps using them in a very dark ritualistic manner, but I mean we are trying to mix middle eastern sounds with Death Metal." 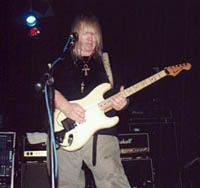 Concerning the explanations of the lyrics of the title track from the new NILE album "Black Seeds of Vengeance": are there any hints of the Amalachites…
"Amalachites, yes, that’s actually quite biblically…"

I was wondering because of this war between Egypt and the Hittites… (The song "Multitude of Foes" deals with this)
"Yes, I have the book, there is comparative studies where they actually found the Hittite records of the exact same war and of course it is very different than the Egypt account. Probably much the same way that our american historical account from World War 2 is very different from the Russian account of World War 2." (Concerning the US and the Soviets maybe the Cold War would have been a clearer example but we get the idea – Ramon)

What does the following mean to you: writing songs, recording them and playing live?
"Well, it’s what I do, it’s my life, I’ve done it all my life. I started playing in Metal bands when I was 16 and I’m 37 now. It’s my life!"

What can people expect from a NILE concert, do you use any special effects or is more a Rock’n’Roll kind of attitude?
"I wouldn’t call it Rock’n’Roll. We play our music, we play the fuck out of it (that’s definitely true – Ramon) but that’s pretty much what we do: we play our music and bring it to the people."

Do you use samples on stage?
"Yes, I bring my computer with me (comment by a fan later on at the concert: "oh my god! Windows ’98! I hope it doesn’t break down!" – which it did not – Ramon). Bringing along extra musicians with extra exotic instruments is a very expensive proposition, certainly beyond the budget of any Death Metal band." (Actually THERION are sometimes undertaking such risks, but who would call them Death Metal nowadays – Ramon)

So you don’t leave out these sounds live…
"Oh no, well, you’ll see for yourself if you stay and listen." (Of course I did, I certainly didn’t drive 200 km just for an interview. I just wanted the readers to get an impression from the artist’s perspective – Ramon)

Do you play the same set each night or do you sometimes vary it?
"No, it’s the same set every night." (then I asked Karl for the set list because I forget things like that right away and because I like his reply I’m going to share it with you. Kind, eh? – Ramon) "We don’t have a set list, we’re professionals, we know what we’re doing (laughs)!"

Can you tell any interesting or funny stories concerning NILE, maybe about your life on the road?


"I suppose there is a billion and one stories to tell… okay: we’re in Paris, France, in this very small club and it is way too small for the amount of human beings they tried to put in there and the kids were like right down on top of me and I have a lot of very expensive equipment pedals there on the floor, a lot of stuff. So usually what I do I try to ask the kids: please don’t touch my stuff, it’s very expensive, you know, give me a hand and don’t climb all over my stuff. So I say to this kid: "ne toucher pas, s’il vous plait", which is roughly: please don’t touch. And he looks at me and goes: "I don’t understand french!" And the kid was from California! Spoke perfect English! (laughs)."

Probably you can’t make a living from NILE, so what are you doing for that?
"I work at the BMW factory in South Carolina, we make the Z3 Roadsters."

What are your hobbies, do you do anything apart from working and NILE?
"Playing music: NILE takes a LOT of my time!"

Any last words?
"Thank you for the opportunity to speak with you and your readers, enjoy the new album and thank you very much."