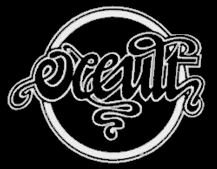 You will all know OCCULT from the Netherlands – the former band of Rachel who is now in charge of the vocal mania in SINISTER. With their new release "Elegy For The Weak", published via Karmageddon Media, they explore further shores of the Death / Thrash territory which is so up-to-date these days but which they celebrated ages ago already to be honest. The new record isn’t as spectacular as the promo-sheet claims, but it is solid, professional and quite aggressive. That is for sure. So it was about time to have a serious word with this act. I was a bit dispappointed by the extremely short answers Maurice stated here. That seemed a bit unmotivated to me actually. But anyway, probably busy as hell – here we go…


Hi there guys. Let’s get started straight away. Tell us something about your new record – what is so special about it and why should every decent Thrash maniac own it?
Maurice: "It’s well produced and has intensity!!!"

Inform us a bit about the current OCCULT line-up. What has happened to the former members? Still around in the scene?
Maurice: "The line-up is the same since ’99, only Rachel is out of the band. I am still in contact with her." 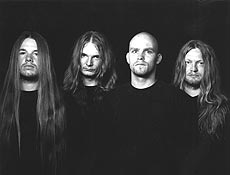 Give us some background information regarding the new output. The title "Elegy For The Weak" sounds quite aggressive and sort of proclaims a certain antipathy concerning the weak. Who do you think is weak?
Maurice: "Simply put, our lyrics reflect our feeling about the sickness ridden world. Wherever you look you always get to see some pathetic creature whose twisted existence spoils everything in its path. You know everyone should fight weakness and conquer it but there are some who just won’t and they will live like worthless scum off of the strong ones. Then you get those who cannot make up their own mind and blindly follow some dogma. Our thrashing attack and sanguinary lyrics are for them."

You label your style as "Black / Thrash" … why is that? Are there any contents-related parallels to the Black Metal scene or what is the significance of this component in your style’s label?
Maurice: "Its hard to describe our music, we are not pure Thrash in the vein of EXODUS or DEATH ANGEL, so I think Black or Death / Thrash fits us more. But then again, its up to everyone, if someone thinks we are just Thrash… then there you go, I don’t argue with it, there is no related paralel to Black Metal though."

Tell us a bit about the Metal scene in your region. Any bands worthwhile being checked?
Maurice: "Inhume, Cliteater, Flesh made sin, Tomb, Callenish Circle… to name a few."

Your record-label co-operation was one hither and thither. What about the situation now?
Maurice: "Good so far, the CD is available in the shops and the media is hitting on us for once!" 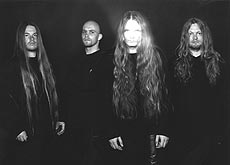 Some insights concerning your time with Mr. Andy Classen, please. I personally think he is slightly overrated as an engineer / producer. His productions are, according to me, rather mediocre… what do you think taking international competition into consideration?
Maurice: "We went to Andy since Richard our guitarplayer liked the sound of KRISIUN, thats all. So far I really like the sound he did for us, I have not heard much of the other CDs he produced, I think I heard one KRISIUN album, which is ok."

Tell us something about your DVD?
Maurice: "The DVD is a documentary and progresses chronologically from our beginning to the present day. We also got a narrator who leads you through our story. We wanted to inform people about our band and also give them the taste of what it is like to be in a Metal band. Our fans can see some of our early live shows, interviews that were never played anywhere before, then of course the craziness that goes on back stage and on tours, our performance at the Dynamo Open Air in ’97, the recording of some of our albums, our ups and downs and how we have matured throughout all these years. There are also 2 videoclips, that you can watch separately."

How do you guys rehearse – any rituals or specific procedures in this respect?
Maurice: "No, just figuring out the songs."

Maybe a funny story from your life on tour?
Maurice: "Rather dissapointing stories… ; -) "

When will there be another tour? Anything planned… future plans in general maybe?
Maurice: "We will do a mini tour with DISMEMBER in September, and back in studio in October."

What do you think of the numerous re-unions in the scene? Maybe you could specify your point of view by referring to the topical SUFFOCATION release?
Maurice: "I don’t know much about SUFFOCATION… as for the reunions, I don’t care, they should do what they want to do, there is enough other stuff we should care about."

Last words? Thanx for your time…
Maurice: "Thanks for the time you put in us as well."