Don’t let yourselves fool by the rather short answers of REQUIEM’s guitarist Philipp Klauser. The Swiss band, who just released their debut full length album "Formed At Birth" via Germany’s Revenge Productions, is far better than that. Their grinding Death Metal comes across almost like American masters MALEVOLENT CREATION or TERRORIZER and convinced me right away. Further information were needed, so here’s what we found out for you…


REQUIEM started out in mid 1997, but your line-up wasn’t completed until you finally found Michi Kuster, who finally joined you on bass and vocals in early 1998… So, what have you done in the first half year of the band’s existence? Did you already write and rehearse material as a three piece? Did anyone of you temporarely take care of the bass and vocal duties?
"We had sessions, collected ideas, which we recorded on audiotape and we already had e few complete songs. We rejected them, when our previous drummer left."

Did you name the band REQUIEM right from the start or have you been working under different monikers previously already? What inspired the name REQUIEM?
"Our first name was Schattenwelt, then Braindead, finally we agreed on Requiem. When I mentioned, that we were looking for a name of our band, my mother meant, why not Requiem, because it sounds like music for corpses."

According to the individual member profiles on your website, only Philipp had played in bands before that musically were in the Death / Thrash direction (but also in Gothic and Punk bands), while Ralph and Michi originally came from the Black Metal scene… So, how did this work out musically in REQUIEM’s beginning and what made you compromise on Death Metal alltogether then?
"First it was hard to make a common cause. Some songs were like Black Metal, others like Death Metal. That changed, when Adi Fuhrer (drums) joined the band. He already had some experience in Death Metal, and his way of playing the drums made it possible to play fast blast-parts. All this made it possible to try, what our favorite bands (Malevolent creation, Suffocation etc.) did and still do." 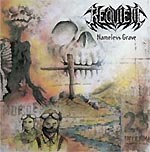 Tell us a bit more about those former bands of yours – IMMORTAL VISION, INTESTINES, SCHATTENWELT, OPELGANG, HEXENTANZ and MOONFOG… How long did they exist, did you record and release anything with them and so on?
"Immortal Vision und Intestines were schoolbands (first steps in the world of heavy sounds), Opelgang was a fun-punk-projekt (often they called me to tell, that the guitarist was too drunken to play), Hexentanz was the first band of Ralph (very ritual Black Metal, with electric beats) and Moonfog was Michis first Band (Black Metal)."

REQUIEM’s early material was still very much in the melodic Death Metal vein… Was that a reflection of what you all listened to at the time or more the result of four guys, with a rather different musical background, that were trying to come up with something completely new?!
"Yes, more likely, call it GrindGothBlack-Metal (Grind goes Metal *ggg). It was like playing with our musical possibilities… but as mentioned: it changed with the new drummer."

What was the reason for you to replace your old drummer Roger Kradolfer with Adi Fuhrer in early 1999?
"Roger graduated and he couldn’t share our motivation to look forward, all this was too mutch and he couldn’t handle it. After a few meetings, we recruited Adi. I knew Adi and his way of playing the drums for quite a long time." 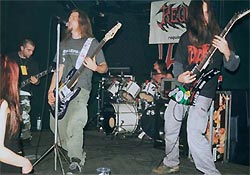 It’s said that Adi had already been involved in several Death Metal acts before, so would you mind telling us the names of those bands and a bit more about his past activities in general here?
"In 1993 or so, Adi played with Death Metal ands like Corrution, then Parusie, Born dead and Megora. With Corruption, I first saw Adi playing."

Was he actually the one to introduce you to the more extreme form of Death Metal? How did things develop from there? Did you play any cover tunes in order to get a better feel for this new direction or was it love at first sight and didn’t cause you any problems at all?
"We first practised with Adi and during the first week, we made 3 songs. Very good vibrations, musically. It was like everybody knew what comes next and what to use in our songs. Bad times for our guitarists – their wrists and fingers hurt for a long time. We never played cover versions, mostly we found our ideas while praticing and jammin’."

You name bands like MALEVOLENT CREATION, SUFFOCATION, HATE PLOW, MISERY INDEX, GORGASM, NAPALM DEATH and BRUTAL TRUTH as some of your personal influences, but also more unusual stuff like PORTISHEAD, ANATHEMA, TOOL or even CYPRESS HILL. When did you actually start enjoying those extreme bands and what have you been listening to prior to that?
"Since I am 10, I listen to Metal. My parents divorced when I was 9 and my mom moved house to quarters with Metal-gangs. So I hung around with them and stumbled on Metal. My first Death Metal concert was Messiah and Aggressor, Flumserhof, CH. I still like old stuff like Stryper, Cinderella, WASP, Alice Cooper, Iron Maiden… simply what was on TV. Additionally, I listen to HipHop, TripHop and Rock. Nu-Metal is shit and I think it’s a Rip-off machinery of the music-industry. Rock is still a thing of misfits."

What have you been up to until you finally recorded the five songs for your debut MCD in mid January 2001? How many songs did you have finished to choose from at the time? Why didn’t you record a demo first?
"We had some shows and created some new songs… From 10 songs we put the best 5 on our MCD…"

Did you already play out live very often at the time? How much time did you generally spend on your songwriting then?
"Before we recorded "Nameless Grave", we had some shows in Switzerland and abroad. We wanted to have a usable demo, so our fans can listen to it at home or anywhere. Normally we practise twice a week."

The MCD was released in March 2001 via Fastbeast Entertainment… Can you tell us a bit more about that company and how you hooked up with them?
"Fastbeast Entertainment was founded by Claudio Furrer (Cropment) and myself. Claudio managed us and we wanted to create a small label to realize our MCD. We separated with Claudio, because I wanted to take things in my own hands. I think the label doesn’t exist anymore, Claudio can’t handle with his own band and ours." 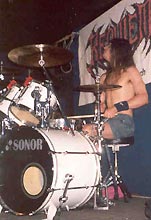 Your band logo and all artwork has been done by Marco Gemmet of Darken Art Productions. When did you get to know him and will you continue to work with him on a regular base?
"Marco is a good friend of mine and a great fan of us. We know eachother for 5 years. He is a genious artist I surely will go on working with him. His homepage and his admirable work: www.darkenart.ch."

After the release of the MCD you played many gigs all across Europe – how did you manage to do so? Were they all self organized? With which bands did you play during that time?
It’s me who manages Requiem, as well all concerts and tours. As time passes by, I meet nice people abroad, whom I can call having concerts. They help me with the merchandising and booking stuff suburban."

When exactly did Revenge Productions get interested in REQUIEM then and how did things develop from there?
"I know Dany for a long time and I knew with which effort he stands by. After the show in Strasbourg, Soulgrinding-Festival, 2001, an agreement was reached."

Two days before you planned on recording your debut album "Formed At Birth" your drummer Adi left the band… Tell us more about that rather bad timing, if you were pissed in any way because of that and if there wouldn’t have been a chance for him to still record the album and then leave afterwards?
"Yes, the thing with Adi was a funny one. Many of his former bands warned me, he would leave, when he looses interest. I never thought this. Above all, we were friends and fellows, in the band or elsewhere. I think, he has personal problems and chronic pains in his elbows. That’s why he quitted his job and friendship, he wanted to re-organize his life. Very doubtful. Instead of leaving in peace, he provoked a quarrel. We suggested him a rest of a few months and then we gonna join again. He didn’t agree. Two months ago he called me and asked me to play with him, what I denied."

How long did it take you until you finally found Reto Crola (from the Swiss band PUNISH) as a replacement? He’s only a session drummer in REQUIEM, isn’t he? Does that mean that you’re still searching for a fulltime member?
"Just one call and Reto was in the band. The main problem is, that he works full time during the summer time in his Gelateria, he drives two hours to our practising-room and he plays with his main-band Punish. So our time to practise is very short. The small tour in May, Reto will play and after that we gonna acquaint Alex from Shrunkenheads (US), who hopefully will stay."

When and where did you record the album then and are there any interesting stories connected to its origin maybe?
"Again we recorded the new CD in the Dynamo Studio, Zurich. We were fully satisfied with the studio and the producer. He granted our wishes and was very critical. Both guitarists remarked, that we played different riffs in the same song. We had to work on it but there was nothing else to care about… smile."

Who came up with the rather unusual idea to incorporate some scratching in the album’s title track?
"That was me… we played with Fate (F) at the Soulgrinding festivals and they had a Live-DJ. I was very amused. As there was a DJ in the studio, eventually, we decided to have some scratches in one song. For some people it’s a deadly sin, but I take responsibility and it still pleases me." 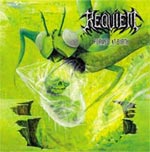 And what was the intention for those re-mixes of the two songs at the end of the disc?
"These two bonus tracks were a gift to two very important persons in our band-history: Red from Draven was our sound technician for years and always did his job bravely and splendit and "Necro-Hase", a neighbour, who was with the band from the first time on… I wanted to have his voice on the CD."

What kind of lyrical inspirations can be found in REQUIEM’s material? Do you prefer lyrics that have a message or do you think that brutal music simply needs brutal lyrics as well?
"The lyrics are mostly about fantasy and gore stuff. We do not care much about the content. It’s more an intensification of the music. But we care about sensefull lyrics."

Now that the album is done, what are your plans for the near future – will you try to go on the road to promote it as good as possible or have you already started working on the next record?
"We are working on new songs, but we gonna have more shows abroad. In October a tour in Spain, France, Portugal is intended. For further intormation please connect: www.requiem-net.com