The following interview with Patricio Spalinger (aka Venus Torment), guitarist / vocalist from Chile based Death / Thrashers RIPPER, was supposed to go online a lot earlier already, but since the band didn’t release any new material yet, it’s still worth being published nevertheless. If you aren’t familiar with these ragers yet, make sure to check out their excellent two full length albums "Experiment Of Existence" and "Raising The Corpse" or the demo compilation "The Exit / Destroy The World" on Unspeakable Axe Records and Iron Pegasus Records respectively…


Hails and thanks for doing this! To start off maybe you could introduce yourself and tell us how this insanity called RIPPER got together. 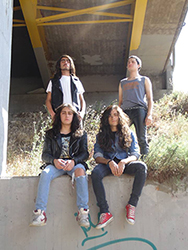 "My name is Patricio Spalinger and I am the co-founder of the band. The band started at the end of 2007, we were very young when we started, we were 13, 14 and 15 years old. We rehearsed almost every day during the summer, we played some covers and we dedicated ourselves to show our musical compositions to start recording our first works. The first songs were ‘Vomiting Blood’, ‘Terror Streets’, ‘Rain Of Bombs’, ‘People Kill The People’, among others. We met by mutual friends in the same province, some of us were schoolmates and we had common tastes in terms of gender and bands, such as POSSESSED, SLAYER, IRON MAIDEN, BLACK SABBATH. I remember that the drummer Miguel Sánchez came up with the name RIPPER, because of the song of JUDAS PRIEST."

Was it your main goal from day one to make this a proper band or was it more like something that just happened. I’m keen on knowing that because you were quite young when the band formed.
"The main idea was to keep up during the time as a band… I think we were lucky to have known the Metal scene in Santiago and to have had known the underground to this day. Few people helped us to spread our material, at the same time we played live people started to recommend us, that is how we became acquainted and started to have more ideas to compose and continue doing the same music."

Was it easy to get the band going or did you have to struggle? Is there a lot of support in Chile for RIPPER?
"From the beginning we had a lot of support, we were also one of the few bands that made Death / Thrash, so it was a little bit of what the bands did, that gave us a big boost. In Chile we have a lot of support, maybe not something massive but what is fair and necessary."

"Experiment Of Existence" is now more than 2 1/2 years old, what do you think about it from today’s point of view? Is there maybe already a bunch of new songs ready for album #3?
"I believe that "Experiment Of Existence" has been one of the best works we have achieved, without deviating from what the band originally did musically. We have new songs for an EP that will be called "Sensory Stagnation", which will contain 5 songs. We also have a few new songs for the third album called "The Unreal"."

How was the recording session? It was your second album but you have released quite a bunch of demos as well. Maybe you can tell us what has changed from 2008 up to 2016. Is it easy to find good studios and engineers in Chile?
"Actually it took us a while to record, we always took the time to review the details well, and in reality we delayed to reach an agreement between all of us, to come together to give our opinions to be satisfied with the final result. During different recordings we have gone through different studies, which have different recording methods, we have gone from simple studies to studies of more complex recordings, where the quality is different, that has been thanks to the stamps that have supported us economically for the recordings. I think it is easy to find an engineer, the difficult thing is to carry out the work and the sound to be the way we want it."

You guys are maniacs when it comes to songwriting and playing your instruments. The only band that is similar in style and always pops up in my mind when thinking about "Experiment Of Existence" is SADUS. How much time do you spend practicing and rehearsing? How does a typical week look like for an axe-wielder and skincrusher in RIPPER? 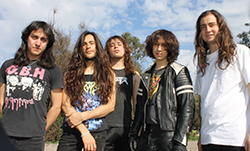 "The times have really changed, at that time we rehearsed only once a week since we all had to do other kinds of things, such as going to study at the University or work. Now that we are in the process of recording the EP, we have distanced ourselves a bit, making everything go slower. What favors us is that everyone keeps playing at home, so when we get together it is not so difficult to reach an agreement between us."

When mentioning SADUS, how about influences? Is RIPPER solely influenced by music or do you get your ideas from different kinds of sources?
"To create the lyrics of "Experiment Of Existence", there were different sources, such as science magazines about the universe, also the Begotten movie and my studies on psychology that I have done in College, all that influenced me to create the themes of the album."

Even though you seem to be advanced as fuck when it comes to performing in the studio I guess playing live is something that is more important to you. You already toured Europe, so maybe you can give us some impressions on that topic. Was there a difference between the Euro shows compared with playing South America? 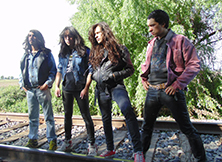 "One of the things I noticed was that the South American public is a bit younger and explosive, the public of Europe, at least in our experience as a band, was that they were calmer and paid much attention to what we played, besides they showed a lot of interest in getting the material from the band. The truth is that since we did not play festivals, we did not play for more than 50 people on each date, but it was entertaining because there was a lot of closeness with the public, we talked with them after playing, we drank beer and shared good times."

What do you think of the current European scene in general? Does it have any relevance in your country or for you personally?
"I find that both continents take Heavy Metal as something quite serious, and for many years. There are many collectors, radios and zines who are in contact with each other. Since today everything is globalized, I believe that there is an interdependence between both continents. Back in Europe I realized that they are quite organized and they care a lot about the well being of the bands, maybe here in Chile you have to learn a lot of that, here everything is paid only with alcohol, it’s a bit difficult to live from the music in these places."

Chile has a lot of outstanding bands to offer like HADES ARCHER, FORCE OF DARKNESS or SLAUGHTBBATH. Do you feel like you’re part of something like a scene? Is it even important for you? 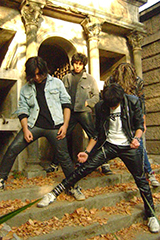 "The scene here in Chile I find is quite broad, however, sometimes by a chance I have talked with people from the bands that you mentioned in some gigs, but the truth is that I do not feel that we are part of a scene, since we almost never play together and we do not keep each other in touch, I think that what I do participate in at least is to go to gigs, get material from the bands that I like, participate in bands material meetings, etc. I think that in that sense if I am part of a scene, that is quite strong here in Chile. I consider these spaces important to know different bands and be aware of the national and international Metal that is generated."

Maybe we should go a bit back in time and talk about your excellent debut "Raising The Corpse". How did you get the record deal and what was it like to be able to release a first official album? What do you think of it from today’s point of view?
"First we had a deal with Underground Defenders, which is a Chilean label in which we released our first demo "Destroy The World", that label came to us when we played the first time in Santiago, Chile. It went very well, the copies were sold very quickly, it was something unexpected. Then a few years passed and Iron Pegasus re-edited the album on vinyl, Gabriel Gatica of Compilation Of Death zine, recommended us to Costa Stoios after seeing us in a live performance, then Iron Pegasus wrote to us that he wanted to make the launch. I think that "Raising The Corpse" has good songs, but I find that they could have been recorded a bit faster, I think it was because we recorded using a metronome, for this reason "Experiment Of Existence" was recorded without a metronome, so it was a more natural speed. The first album helped us achieve greater reach towards people and different countries, even Fenriz of DARKTHRONE made a publication a while ago on the album, it was excellent."

Where do you wanna see RIPPER in five years from now? Do you even plan that far ahead? Do you even plan at all?
"After going to Europe, we would like to go to North America, prepare a big tour for those places. We also want to record the third album and maybe 5 more years a fourth album will be ready. They offered to go to the USA and Canada, we hope and it would be great if it could be done soon." 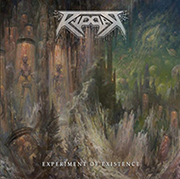 Imagine you could put a fantasy tourpackage together consisting of whatever band from whatever era. Who would RIPPER be touring with?
"I would like touring with MORBID ANGEL, PESTILENCE, DEATH, NAPALM DEATH, POSSESSED!"

Thanks for taking your time, the last words are yours.
"I want to thank you for giving us the space in this great webzine, which I already knew from before and read reviews of my favorite Heavy Metal albums, so… it has been a pleasure. I hope we continue with RIPPER, we send a greeting to all our fans who have been supporting us for years."