As the German Death Metal scene grows stronger and stronger, we thought it is time to get some detailed information about one of those artists. SLAUGHTERDAY celebrates their 5th birthday with their new EP “Abattoir” which pretty heavily spins in my player, so I thought it is a good opportunity to hook up with Bernd and Jens to answer my questions… 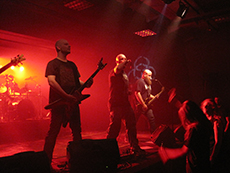 Welcome to VFTD guys. Hope you are doing well and thank you for taking the time to answer some of my questions.
Jens: “Thanks for giving us the opportunity to be on your magazine. We appreciate it!”

The Eastfrisian scene is pretty active for quite a long time already. Could you please tell me, how you came together with Jens and how the idea was born, to start SLAUGHTERDAY. Have you played together before SLAUGHTERDAY?
Bernd: “Jens and I have not played together in any other band, but always had the idea to start a new project together. So, we started jamming without any concrete plans to release something or to get a record deal. At that point we didn’t have a place to rehearse regularly and we didn’t have a name either. The Party-San Festival in 2011 was a turning point for us. AUTOPSY played and Chris Reifert announced the song ‘Slaughterday’, which they had already played, for the second time by mistake. We instantly looked at each other and knew that that’s gonna be our name. A perfect match for us being huge AUTOPSY fans. But it still took a few months for us to get a place to rehearse on a regular basis. At the end of 2011 we really started to write songs.” 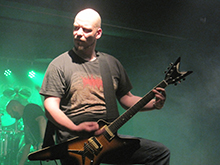 How did you develop the style of SLAUGHTERDAY? Was there a masterplan how you would like to sound? I personally love the stench of putrefaction in your sound but also enjoy the classic Heavy Metal tunes and the Death’n’Roll vibes. What are your musical influences for the band?
Jens: “There was no such plan. We just rehearse every week and see, where our ideas lead to. But I guess it´s obvious that AUTOPSY is one of our main influences alongside with other old school Death Metal bands and of course classic Doom and Heavy Metal bands.” 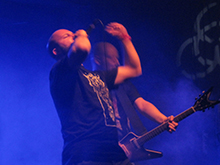 You released your demo in 2013 already via F.D.A. Records, limited to 166 copies. Tell us, how you got together with them and were there any other labels interested in releasing your stuff?
Bernd: “After having finished one of our rehearsal songs (‘Abyss Of Nameless Fear’) we set up a bandcamp page and after that posted the information in the forum of the well-known German Rock Hard Magazine. Rico from F.D.A. Records immediately got in touch with us and was excited to hear some more material. So, after having heard two more of our rehearsal tracks, he decided to work with us and offered us a deal. We had no plans to work with any other label back then.”
How is your songwriting working? As a two-piece are you rehearsing regularly and writing there or do you exchange your ideas via the modern songwriting tools online?
Jens: “We rehearse regularly and all our songs are created during that time. Of course, we come up with riffs or ideas that we already had in our heads back home, but there´s no such thing as sending files back and forth. What we do is recording drums and one guitar in the rehearsal room and after that I add the other guitars.” 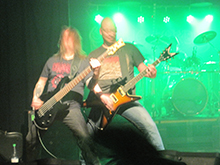 Your first full-length “Nightmare Vortex“ was already released at the end of 2013. It featured two of the four demo tracks and already showed you in a damn good shape. The songs sounded like you have played together for ages. Can you recall anything from the recordings and the reactions from the scene?
Jens: “The recordings were very relaxed as always with Jörg. Actually, the demo was my first work with Bernd, but of course not the first recording he or I did. I must say, that the two of us are really a very good team when it comes to songwriting and recording. As far as the scene is concerned: we were quite surprised of the positive reactions!”

In 2014 you finally released the two remaining demo tracks in form of the “Ravenous“ EP plus 2 other tracks. Have you recorded those tracks separately or during the “Nightmare Vortex Sessions“?
Jens: “It was the same recording session.” 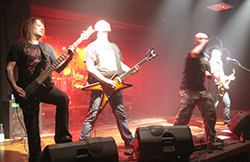 Already in 2016 you returned with your second full-length “Laws Of The Occult“ which turned out pretty cool again. I liked the more dirty and even thrashy approach in your guitars on this album. Apart from this, we again received the dirty old school Death Metal. Were there any plans to change the sound a bit or has this simply happened? Again the Heavy Metal solos of Jens turned out brilliant and proved again that both of you our outstanding musicians.
Jens: “Thanks a lot. But there was no plan. I think, it´s more a natural way of exploring new things and of course a result of the music we listen to during the writing process.”

In 2018 you released a split with PHANTOM CORPORATION, who are a really interesting project and seem to turn into a real band now. Who came up with the idea for that?
Jens: “Arne, Mücke and Leif are friends of ours for a long time now, so we all wanted to release something like this. I don´t know, who came up with the idea in the first place.” 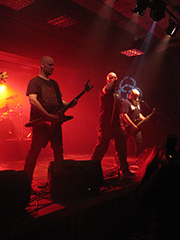 Your last EP “Abattoir“ was unleashed earlier this year and was reviewed by us as well. The songs turned out very good again and you still stick to your style without sounding boring. One topic on your releases are cover tunes, which give a hint of the bands, which might have influenced you. Both covers, TROUBLE and AMORPHIS, are very good. How do you choose your covers?
Jens: “First of all we have to like the song and the band! Secondly the song has to fit to our sound and style. Often people tell us, that they thought it was a SLAUGHTERDAY song at first. That´s the best compliment for us. We would never cover a song just because it´s a cool song, you have to treat it with respect to the song and the artist that wrote that song. I hope, we managed it properly in the past.”

Thank you very much for your patience again and for taking the time, answering my questions. Any last words to the Voices readers??
Jens: “There are many cool bands out there which only few people had heard of. Check them out and support the underground!”