Arisen from the ashes of the too soon defunct EXCORIATE (Germany), VENENUM strikes mercilessly with its Heavy Metal of Death! Even though the band has only released a self-titled mini album for now, one can assume that VENENUM is a band that already matters and will for sure leave its mark in the Death Metal legacy. Mixing asphyxiating riffs of heaviness and eerie passages of morbid darkness, VENENUM definitely knows how to combine the best of death and darkness into their age old Metal cauldron.


To make it clear from the start, VENENUM is indeed spawned by some former members of EXCORIATE. Hence it feels pretty natural to hear a link between both bands, but it would be a mistake to think that VENENUM is a pale copy of EXCORIATE. What were / are your goals when creating this new entity? Wasn’t the drummer Sebastian Engelhardt (EXCORIATE, EARTH FLIGHT) also taking part in the first incarnation of the band? When did your actual drummer and singer / bass player join the band?
"Of course there is a link between both bands, but VENENUM is a whole new chapter and stands for its own. This mysterious journey has just begun and only time shall tell on which deadly paths and to which dark realms it will take us. Our drummer and vocalist / bassist joined in late 2010."

Morbid paraphernalia is a very important part of your band aura. On stage you appear with blood painted faces, skulls, candles, tombstones, chains and utter darkness. Not to forget that the artwork on the mini album reeks of old looking hand drawings (I know that your logo was pretty much inspired by the artwork of the movie Nosferatu by Herzog). At one point it seems that your image is very important, but on the other hand you only have a very simple, yet efficient website. No social (inter)networks are needed to spread your name. How important and deep is the way you represent yourself publicly? By using all these very classic images and outfits, don’t you fear that people think you’re just another faceless old school Death Metal band on the map?
"The visual aspect is as important as the music. Our passion and dedication brings this poison to boil and all the necessary ingredients like artwork and live appearance create the mysterious and obscure atmosphere / flair which steams out of this bowl which is VENENUM. We are not in need to give much information about us; our name is spreading like a deadly disease who seeks its victims worth infecting. We are not another soulless Death Metal band." 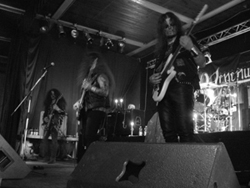 For once VENENUM doesn’t use the typical Death Metal lyrics. Your texts are very profound and mysterious. They make me see cosmic wastelands and hellish crossfires! The lyrics are between the occult and the metaphysical topics. What made you head up for that direction, as most Death Metal bands usually don’t bother so much about their lyrical content?
"It is important that the lyrics harmonize with the music. Like we said above, it’s another ingredient in this deadly potion. We will never write / sing about something without any meaning, we would rather play instrumental music."

Something that’s not appearing clearly on your mini album is your taste for the 70s Rock / proto Hardrock and 80s Power / Speed Metal. For instance you covered some URIAH HEEP stuff to close your first gig appearance at the RAGING DEATH DATE Festival, and I know for sure that you are all praising the old forgotten jewel called POWERLORD very much. I think it’s pretty original for a Death Metal band to incorporate non-strictly Death Metal elements in their music. I recognize that early bands like ATOMIC ROOSTER, THE CRAZY WORLD OF ARTHUR BROWN, DUST or COVEN do hold an undeniable part of darkness in their music. Is VENENUM also a channel for this "old fashioned" (in a positive way) darkness to be spread? How do you see the current trend of bands like THE DEVIL’S BLOOD, GHOST mixing 70s Rock and (Black) Metal imagery? Do you feel connected to them?
"We are of course big fans of old Rock music and our sources of inspiration lie everywhere. There are no boundaries for us like genres, styles, etc. when it comes to inspiration. The most important thing is that there is that special flair / feeling, which you can find in all different kinds of music and art. Unfortunately you don’t find a lot of feeling in art nowadays. That original source, which is the root of everything and where we take our energy and power from, got too much adulterated. We very much appreciate the music of a lot of new bands like GHOST, THE DEVIL’S BLOOD, etc. and it’s nice to see that also other groups found that link to that source and try to create that special flair. The problem is, most of the people don’t really get it and either follow it like blind sheep or are against it because of the sake of being against something. People should start to think again and use their free will and don’t care about what others say or think."

Sepulchral Voice is definitely a label standing for quality over quantity. You’re old friends of them since a long time. Still I heard that Detest Records was also interested in signing you. What made you go for the Sepulchral Voice roster? By the way, what did you think of the new NECROS CHRISTOS album?
"Sepulchral Voice has been our first and only choice since VENENUM was spawned. Of course there were a lot of other labels who wanted to sign us but there is no other label that is more honest and serious than SVR! The new NECROS CHRISTOS album is brilliant, it’s amazing how they managed to follow the expectations and even topped their killer debut." 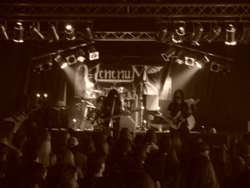 Talking about Detest Records in the previous question makes me think that Jerry is definitely going to organize a killer gig with you in October 2011. On the bill there will be no less than the almighty ASPHYX, MASTER (playing an exclusive DEATHSTRIKE show) and a couple of Detest Records bands! That’s pretty interesting to see that for such a young band you already get some very interesting gig offers, not to forget you appearance at the HELLS PLEASURE festival this summer. But most of you are involved in other bands like HELLISH CROSSFIRE or DIVISION SPEED and have regular jobs. How high is your priority with VENENUM then?
"It’s really great for us to play at all that great shows and we are really looking forward to the gig with ASPHYX in Brussels in February 2012. To play our second gig at the Hell’s Pleasure Festival this summer is awesome as well. All of us are / have been involved in other bands / projects and they are equally important to us, but we are into VENENUM with the biggest amount of passion which is possible."

Sure you’re no complete newcomers to the scene, but only with one mini album, VENENUM managed to create quite a buzz lately. Those who heard your music already wait for your first album to be released. Did you expect such a response? You already use some instrumental tracks between the songs. Will you follow the same formula on your first LP? What are, from your point of view, the positive aspects and the letdowns of your first mini album? How do you see the band evolve in the future?
"Well, although VENENUM was found in 2008, there hasn’t been a lot of progress besides songwriting until the line-up 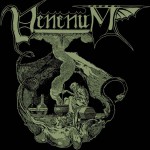 was complete in late 2010. There is also the problem with the distance between the band members, the vocalist / bassist lives in Austria. So, some parts had to be recorded in a very short time period without a lot of rehearsing with the full line-up. Nevertheless the result was beyond our expectations and that’s also the reason why it was released as a mini album instead of a demo although a lot of people think it’s a demo since it was first released on tape. The vinyl and CD version will follow soon. We haven’t really thought about any future releases since we are still in the releasing process of the current mini album, so we can’t say what will come next. Anyway, we are currently working on new songs with the great material which is still left from the two guitarists, which are the main songwriters at the moment. The other members will hopefully get more involved into that process as soon as the problems with the distance are getting better."

You recorded the mini album in your rehearsal room, and then sent the result to Patrick Engel (AOD from HATESPAWN) who did a killer job on the mix and mastering. Next time, are you going to record in a studio or rather stick to the rehearsal recordings in order to keep a raw edge to the sound?
"Our next recordings will be together with Patrick in his studio I guess, since we don’t really know much about all that recording stuff and it would save a lot of time and nerves."

Let’s hope that VENENUM will not die as fast as EXCORIATE! May we share some beers and Metal soon mates. Until then, you might as well spew the last words of deadly wisdom to the craving maniacs.
"Thank you very much for that Interview and all your support Nathaniel, it has been a real pleasure. MEMENTO MORI!!!"