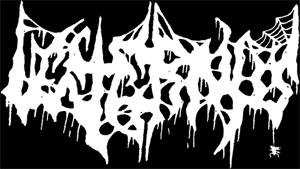 Sweden is home to countless bands, old and new. VETERNUS is a part of the new Uppsalla scene, which is fast becoming a worthy successor to the now mythical Stockholm scene of twenty years ago. While some may look upon them as amateurish children futilely trying to live up to Stockholm’s legacy, it should become clear to anyone who listens to them that VETERNUS (and by extension all the Uppsalla bands) are serious, passionate, and above all, talented. They could easily rival any old band. David Indelof, the ringleader of this unholy outfit, was kind enough to answer a few of my questions.

How did VETERNUS begin?
"Well, since the age of about 15 I’ve always wanted to play Death Metal. I recorded a couple of songs for fun at home where I played everything myself, and friends of mine really liked the music and encouraged me to do something serious about it. It was more like a one man project, and I called it VETERNUS. But then J. Dee from GRAVELESS and E. Forcas from DEGIAL joined as studio session members for the debut demo. The first rehersal did actually not occur until the summer of 2009. But VETERNUS is at the moment going through some line-up changes."

Having the likes of DEGIAL and GRAVELESS at your side must have been motivating. Are you a fan of the newly risen scene in Sweden?
"Yeah, they are both good bands. Forcas is a great drummer. Probably the best Death Metal drummer in Uppsala. Yes, I would say that I’m a fan of the newly risen scene in Sweden. A lot of good bands who play Death Metal the way it suppose to sounds. I’m glad that Sweden is a country that produces quality music, especially Death Metal. I hope that some of the current Swedish bands will rise from the underground and get the attention and credit that they deserve."

I heard from Putte P. Possessed, formerly of LAMENTATION, the other day. He said he plays drums in VETERNUS now. When did you induct him into the band? Are you a fan of LAMENTATION?
"Yes, he plays in VETERNUS now (since around November 2009). I asked him to join pretty immediately after Forcas told me that he had to leave VETERNUS. He had to because he was busy with his other main bands and will also tour with DIE HARD this summer. I’ve heard of LAMENTATION before but I’ve never seen them live or so, but I’ve heard some songs from Myspace and I think they are good. Too bad they have split. Well, lucky for VETERNUS. Perhaps Putte wouldn’t joined if they didn’t split, Hehe. He is a nice drummer and motivated to the music."

Gottfrid Ahman of INVIDIOUS designed the artwork for your first demo. How did you come into contact with him. Are there plans to collaborate with INVIDIOUS in the future?
"The layout is done by Ormen, and not Gottfrid. Ormen wants to stay anonymous. Ormen is a sick mind, that’s how I got in contact with him. And on further notice INVIDIOUS is INVIDIOUS and VETERNUS is VETERNUS."

Okay, thanks for clearing that up. Now about the demo – how long did it take to sell out? Has underground interest helped inspire you to go further?
"The demo was sold out surprisingly fast. The 75 copies that we printed was sold out within a couple of months. Yeah, the underground interest has really helped our motivation to continue. It’s fun that Sweden has a supporting scene. I’ve received demo orders from Mexico, Australia, Italy and so on, so it’s cool that those kind of countries are interested as well. So I hope the upcoming single will sell good. But it will be printed in about 500 copies, so it’s a lot more than the demo."

Speaking of those countries, are there any bands you’re in contact with overseas? Have any of them influenced you?
"No, I don’t think so. But I’m in contact with people who play in bands overseas. I can not remember any of their band names though."

What do you think of the internet as it relates to Metal? Is it a good or bad thing? On the one hand, it’s easier to communicate with people, while on the other, there’s a lot of time devoted to gossip and infighting. Would you prefer to write letters the old fashioned way? Would that help thin the herd of bad bands?

"I think internet is good, when it relates to Metal. It’s very easy to communicate through myspace and stuff like that. It’s very necessary when it comes to promotion too. I haven’t heard of any bad gossiping actually. Nothing I’ve noticed at least. Even though I like the charm of writing letters and send to other continents, I prefer the internet. It’s much easier. I am not that oldschool, haha. I don’t care if I sometimes hear of bad bands. I think you will hear of those bands even if you send letters or use internet. Even if letters perhaps are more obscure and underground."

VETERNUS doesn’t seem as predicated on human gore as so many other bands are. Instead, you guys seem to have an affinity for the occult and black magic. Have you read any books on magic? If so, please describe them.
"Well, I wouldn’t say that the lyrics in VETERNUS are original. The main lyrics themes are basically death and suffering. I like to write lyrics about does kind of things in a morbid but not in an exaggerated way. But no, we don’t have that much gore and stuff in the lyrics. I try to write it as intence and evil as possible without involving any gore. I haven’t read any books on magic or the occult. I think I’m most influenced by horror movies and stuff when it comes to lyrics. But I’m interrested to read about the occult. I Will probably get into it pretty soon. It would feel wrong to write about stuff like that now in VETERNUS, if I didn’t know what I was talking about."

Do you think that when the Uppsalla scene gets bigger it might suffer from imitation bands like the original Stockholm scene did? If that were to happen, it would mean you and the Metal of Deaths did something right. Do you feel that such a happening is really a blessing in disguise?
"Haha, yeah I don’t know how big the Uppsala scene will get, but it seems to get bigger and bigger. I’m very unsure if this scene will have such an impact as the early Stockholm scene had on the 80s. After all when NIHILIST, MEFISTO, DISMEMBER and all of those bands placed their stamps, it really meant something for the upcoming extreme music. Perhaps people will look up "old, respectable, obscure Uppsala bands" in 20 years or so, but I guess that’s kind of charming."

Would you like for the Uppsalla scene to grow as large as the old Stockholm scene? It might mean wading through dozens of mediocre bands to find the few talented ones, but then again, we have to do that already…
"Well, I don’t see a problem why it shouldn’t get as large as the Stockholm scene.I mean, sure there where alot of mediocre bands back then, but I think that the bands who deserved their cred got it. The ones who were "something more", like NIHILIST, DISMEMBER etc. I personally think that the Uppsala scene delivers high quality music, so I don’t think it would be a problem actually."

Yes, I completely agree. For those of us who aren’t as familiar with the Uppsalla Metal of Death as we should be, could you list some of the best up and coming bands from your city? Any brand new bands we should look out for besides yourselves?
"Well except for VETERNUS, witch is the best band in Uppsala, there is bands like: INVIDIOUS, NOCTUM (including me on guitar / vocals.), DEGIAL, IN SOLITUDE, WASTER, GRAVELESS and BAPHOMET. These are bands I can say spontaniously. Sorry if I forgot someone."

The Swedish scene, no matter the year, has always sounded unique unto itself. What’s the Uppsala scene’s relationship with Death Metal overseas? Do you guys draw influences from the United States, Brazil, and other countries?
"Well, I think we definitely draw influences from countries like USA and Brazil. VETERNUS would probably not sound the way it does if it wasn’t for bands like SEPULTURA and MORBID ANGEL. I think the Swedish Death Metal scene wouldn’t sound the way it sounds, if bands like those didn’t exist."

But do you think that the Swedish scene could stand to use some more outside influences? Some element to spice things up? Many people complain that the Swedish bands have sounded the same since ENTOMBED. I tend to disagree, but there is something to be said for such a claim. Do you think it’s possible another Swedish band might emerge with an entirely different sound; one that is still Swedish, but sounds nothing like the icy buzzsaw guitar we’re so familiar with?
"I really disagree that Swedish bands sounds to much like ENTOMBED. Total bullshit. We are influenced by many bands all around. We’re not just "doing our thing" in Sweden. I mean, just look at VETERNUS. Doesn’t it sound more "American" then "Swedish"? At least my bigest influences are from MORBID ANGEL and DEATH when it comes to writing Death Metal." 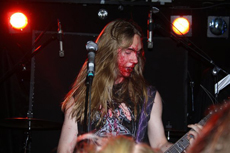 Yes. Do you think that with the internet it’ll be harder for any one’s sound to become associated with any particular country or region?
"No I don’t think so."

Do you find that some of the reunions that have taken place within the last few years, such as CARCASS, AT THE GATES, etc, seem forced and only happened because of commercial demand?
"Yes, I would say that. There is alot of Swedish bands who did that recently. I don’t really like that actually. Sience the "Swedish Death Metal" book came out, there is some old bands reunited. I really don’t know if I like that. I don’t know if it’s only commercial demands, but they should keep their name as it is and not do a perhaps desperate and unsucced reunion."

Last question: what can we expect from VETERNUS in 2010?
"Well, the 7" will probably be out in September this year through Detest Records (Belgium – www.detestrecords.com). It will be printed in 600 copies, so make sure that you get one! It will be better than the "Perpetual Insanity" demo for sure. We are at the moment writing some new material which may result in another EP or something. But I would like to release a full length in 2011 or 2012. We will simply have to wait and see."

Thank you for doing the interview.
"Thank YOU."