It took us quite a while to finally present a feature on these guys, but as soon as Laci found out about the official website of Germany’s Thrashers VIOLENT FORCE, he of course ended up doing the overdue interview with drummer Hille right away. Unfortunately his answers were not always as informative as we hoped they would be (which is a bit disappointing, especially considering the fact that this interview was done in German originally!), but what the heck – it’s still cool to hear some fresh o-tones from a band, that for some strange reason always stood in the overmighty shadow of fellow Thrashers KREATOR, SODOM or DESTRUCTION… Enjoy!


Greetings Hille! I’m glad that you agreed to answer my questions. I would like to know everything about VIOLENT FORCE and the time you were part of the scene. When, where and by whom was the band originally founded and which bands influenced you at the time?
"I can’t really recall the exact day of origin, but VIOLENT FORCE was founded in Velbert, Germany and our influences were of course MOTÖRHEAD, while I personally also enjoyed SLAYER a lot!"

Tell us a bit about your rehearsals… how often did you rehearse a week?
"We got together five times a week and it was always pretty noisy. We used to rehearse in a small room of 3 x 3 meters, in which we also had all our equipment, so it was pretty insane."

How many demos did you record and which songs appeared on ’em? What kind of reactions did you get from the press and the fans?
"I can’t exactly tell anymore… the reactions were amazing. We used to have (and still have) fans all around the world and I still ask myself where all those people in Brazil or Australia got our demos from. Obviously back then there was no internet, you know… (but there was tapetrading, Hille – Frank)."

When did you start recording the album? Where and with whom did you record it? Do you still recall the recordings? 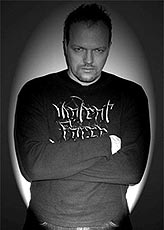 "I don’t remember the date anymore… I wasn’t able to record the complete drum tracks yet, so Atomic Steif helped me out on three of the songs. I really liked that, as he used to be one of the original VIOLENT FORCE members."

Who used to write all the music and lyrics and what were the lyrics all about?
"Lemmy wrote all our lyrics."

The album got entitled "Malevolent Assault Of Tomorrow"… What was the title all about?
"I have no idea! I never cared for the lyrics. For me the music always came first. I never freaked out on lyrics, otherwise I would’ve written a book. I also hate all these discussions about lyrics… they all sing about the same shit anyway, so what? If all those so called great writers would like to change the world they should join Greenpeace instead of playing in a Metal band. Or did you ever experience that fans are telling you after a show: "Hey, the music sucked, but the lyrics were damn cool!" Bullshit!"

What can you tell us about the instrumental? Whose idea was it to use such a track on the album?
"It was completely my idea and then I worked on it together with Stachel. That song is another good example that I don’t care for lyrics at all. The song is a little SLAYER inspired, my alltime fave band!"

Musically I would compare VIOLENT FORCE to SODOM and MOTÖRHEAD… In my opinion you also had some Punk influences – do you agree in that?
"No, I don’t think we were influenced by Punk, even though people freaked out in a similar way at our shows."

Have you been on the road after the album got released? With which bands did you play?
"Just a few gigs… the band disbanded shortly after."

When and why did VIOLENT FORCE split up? What have you all done afterwards?
"I don’t really know what the others were doing… Lemmy played in a couple of bands, same goes for Stachel. Waldi became a father and I played in two bands, but nothing major. I built up a little studio and played around with several synthesizers. I always enjoyed mystical synthsounds." 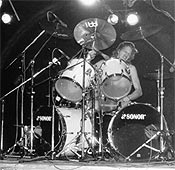 Was VIOLENT FORCE a cult act from your point of view? Have you been popular with a steady fanbase?
"Yeah, absoluty! We used to have a really big fanbase worldwide. A very good proof for that is the massive amount of emails that I receive since the origin of the official VIOLENT FORCE website in 2003… from Chile, Brazil, Poland, Australia etc.etc."

Thrash Metal was very popular in the worldwide underground in the mid 80s. Please tell us a bit about that time. What kind of fanzines and bands have been around, how was the relationship between the bands and so on. In other words: how was the underground back then? What kind of experiences did you personally make?
"The best fanzine back then was Rock Hard. The bands in our area all got along great with each other. We had a real good relationship with LIVING DEATH, KREATOR, DEATHROW, ASSASSIN, SODOM and many more. We always invited each other when we played gigs. Sometimes we played in their area, sometimes they in our. That was great! This way all bands benefitted from each other and got lots of playing possibilities. The underground scene was really cool! We, the bands, had a lot of meetings and drinking sessions with our fans. There’s a bridge in Velbert that we often had Metal meetings under. That was great, fans and bands together. Due to the fact that we didn’t behave like big rockstars or anything all the participating bands were so popular among the fans." 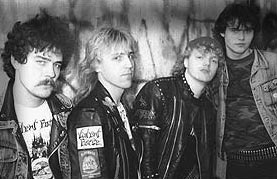 DESTRUCTION, KREATOR and SODOM were the most popular German Thrash bands, being the forerunners of the first movement. What made them this popular?
"I don’t know… I can only speak for KREATOR who were always at those partys with us… and fans really liked that… Maybe it was because of that. It was one big family."

What do you think about bands like S.D.I., PROTECTOR, LIVING DEATH, EXUMER, DARKNESS etc., who became cult acts, but never really made it as big as SODOM, KREATOR and DESTRUCTION. Why?
"Because KREATOR and SODOM were so close to their fans. These bands were founded within Metal fan clubs, they used to be fans themselves and they still are."

Thrash Metal was most famous in the "Ruhrpott" area in Germany and San Francisco’s Bay Area… Do you agree with that?
"You can’t say that… Bands were founded everywhere in Germany. I wouldn’t limit that to one particular city or area…"

In your opinion, why has Thrash Metal lost its popularity at the end of the 80s and why became Death Metal so popular instead?
"I’m not a musicologist… I have no idea."

What’s your opinion about the music (the scene) of the 90s and today? How would you campre it to the one in the 80s? How much has changed, especially considering the Thrash bands…?
"I’m not going to say that "everything was better back then". There’s a lot of good bands around nowadays as well, no need to mention any particular one."

What do you think of the return of many 80s Thrash bands, like DEATH ANGEL, HEATHEN, NUCLEAR ASSAULT, NASTY SAVAGE, EXODUS etc.? Do you think it makes sense to reform a cult act? Have you heard their new albums? Do you like them? 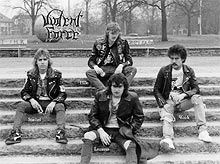 "I would only enjoy playing a show with all those bands from the past days. Every band plays five songs and then party. For instance LIVING DEATH, KREATOR, DEATHROW, ASSASSIN, SODOM and VIOLENT FORCE… that would be kinda cool."

Do you like the so-called modern Thrash bands like RITUAL CARNAGE, CARNAL FORGE, THE HAUNTED, CORPORATION 187 and so on? Do you think they are original or do they just copy the old classics?
"I don’t know any of them J I don’t mind if they copy as long as the fans enjoy it. Why not? We also were inspired by MOTÖRHEAD and SLAYER back then, so…"

What’s your opinion on the German Thrash scene? Do you think there’s only talented bands? Do you know bands like WASTELAND, STAHLTRÄGER, WITCHBURNER etc.?
"No, I don’t know them either." 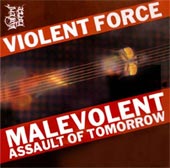 ASSASSIN, VENDETTA, DESTRUCTION and IRON ANGEL are all back in business, EXUMER played Wacken a couple of years ago and NECRONOMICON have also released new material. What’s next? Will there be a Thrash renaissance?
"Nothing planned so far…"

Have you never considered bringing VIOLENT FORCE back to life as well? What are the other members doing these days? Are you still in touch with them? Do you still hang out with members of those old bands, like for example RISK, HOLY MOSES, ASSASSIN, POISON, LIVING DEATH, DEATHROW etc.?
"I am currently in good contact with www.mortalremains.de from Wuppertal. I will go see them play next Saturday. Never saw them live before, but they are really cool on record."

Tell us about the VIOLENT FORCE website…. Anything we should know about it? How often do you update it? Will there be the possibility to download music as well?
"The site will be renewed later this year, with a forum etc. More of it then."

Hille, thanx for your answers, I hope my questions didn’t bore you… Any final thoughts you’d like to share with us? All the best.
"Please send me a copy of the finished interview and where I can find it. I would like to add it to the VIOLENT FORCE website, with a link to your page, ok?"