It seems like Germany is bursting out with high quality Death Metal bands nowadays and F.D.A. Records is partly to blame for this, releasing one killer album after another. March 20, 2015 is the day when they will drop on the world a brand new album by furious Death Metal machine WEAK ASIDE called "The Next Offensive". It has made quite an impression at the Voices From The Darkside HQ (as seen in the review), so we had to learn more what makes this machine run from the guitarist / vocalist Tom Zorn…


Hi Tom! Can you briefly introduce WEAK ASIDE in its current incarnation? When did you find the band and what was the main motive to start afresh after FEARER?
"Line-up: Tom Zorn (guitar / vocals), Luke Kerk (lead guitar, also DAWN OF DISEASE), Alex Pahl (bass, ex – DEW-SCENTED), Marc Dieken (drums, ex – DEW-SCENTED). WEAK ASIDE started out in 2006. Three months after FEARER had called the quits an old buddy of mine asked me if I was interested in a jam session just for fun. He also knew a drummer and bass player who would be into it. But all they wanted to play was slow double bass focused Death Metal, so this is how WEAK ASIDE came to life."

OK, can we get back to really old times now and ask what did turn you on to Metal? When did you realize you wanted to start playing?
"It started when I was about 14 years old. One of my friends brought IRON MAIDEN’s “Killers” to a party… that was the beginning of all evil. When we were 17 my friends and I bought our first instruments and started playing in our local youth center. That was in 1990."

I know that you’ve been doing this craft of Death Metal for quite a while with different bands. Can you mention some of them which you are most proud of and tell us why they broke up?
"My first band was DESTINATION UNKNOWN from 1990 to 1993, unfortunately, there are no demos from this time. Then from 1993 until 1995 I played in a band called VOMITING CORPSES, an awesome Death Metal band from Emden playing brutal Death Metal with lots of great harmonies and three singers. Unfortunately, the ego of every single one of the four members was too big to fit into the same rehearsal room, therefore, Frank and I formed FEARER in 1995 (the other members went on in ANASARCA – Frank). It lasted until 2006 until our drummer left and we couldn’t find an adequate replacement. So, with a new line-up I started WEAK ASIDE."

Well, let’s focus on the new album "The Next Offensive". How long did it take to write? And what was the recording process? Do you own a home studio or use other facilities?
"When the current line-up was complete we intensively concentrated on songwriting and within about 1 to 1.5 years the songs for the album were finished. The recording process was very relaxed. We worked together with Jörg Uken at Soundlodge Studio. All of us had already recorded albums there before with other bands, the atmosphere was quite laid-back but professional at the same time."

So far there have been really positive reactions to the new album and I also can add my voice to the opinion that it’s really solid and heavy Death Metal the way it should be played! I was a bit surprised how different people hear different influences in your sound. I personally would compare it to DISMEMBER and HAIL OF BULLETS. Others hear Florida Death Metal. What would you say?
"Thanks a lot! We really appreciate the positive reactions concerning the new album. To be honest I am surprised, too. Obviously a wide range of great Death Metal bands seems to have contributed to the sound of “The Next Offensive”. Of course as the whole band is involved in the songwriting process everyone brings his own influences. And these are undeniably mostly from the Death Metal sector. But although one can hear numerous Death Metal styles we always try to give the music our own special trademark by for example special vocal parts, guitar melodies, a killer bassline or kickass drums." 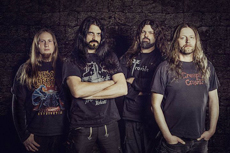 Are you a touring band? Do you play lots of live gigs or just festivals? What are the best "unknown" festivals in Germany?
"We are definetely a touring band that regularly needs to hit the stage but on a smaller scale than “professional” bands. We all got our jobs but a tour of 2-3 weeks would be no problem for us. In addition we are looking forward to (hopefully) play some great club shows and festivals accompanying the release of “The Next Offensive”. I don’t know if “unknown” is the right term, but when it comes to "smaller" festivals I like the PROTZEN OPEN AIR and the CHRONICAL MOSHERS OPEN AIR very much. In November a great indoor festival called EAR TERROR FESTIVAL takes place in Emden. I recommend it to everyone who is into Death Metal."

That’s great to know and maniacs should take note of these festivals. Do you keep up with what’s going on in the Death Metal scene or do you mostly prefer to stick to old school bands?
"Certainly I have got my old school favorites. But it is also important to keep an eye on what happens in the Death Metal scene. Especially the German scene appears to celebrate some kind of renaissance. There are some really great Death Metal bands that can definitely keep up with the old heroes. Bands like SLAUGHTERDAY, DEADBORN or DESERTED FEAR play some really good Death Metal." 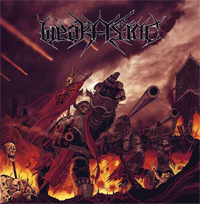 What is your opinion about old bands reforming and releasing albums? Any in particular that you liked and didn’t? Also in this case I’m also curious what you think of MORGOTH releasing a new album and being active again? Are there any bands you would like to see reform?
"I’m not totally against old bands doing a reunion or bands who re-record their classic albums or tunes. If you only like the old stuff nobody forces you to listen to them. For example, I’m really happy that AUTOPSY is back. I think they’re still a really good live band and I’m also into their new albums. It’s the same with DARK ANGEL. I haven’t seen them live yet but I watched some videos on YouTube and I think they really kick ass. I’m looking forward to catch them live when they’re back in Europe. I think it’s okay that MORGOTH came back. To tell you the truth, I never was their biggest fan but I saw them live as support of BOLT THROWER in Bremen and they were pretty good. I’m excited to hear the new songs with Jagger of DISBELIEF on vocals. I think he has a powerful and unique voice."

OK, here’s a tricky question – if you absolutely had to choose one – Thrash or Death?
"It’s not possible to answer this question. Everyone in our band loves Death and Thrash Metal equally."

Another curious one – did you read Voices From The Darkside magazine in its paper form? How important was it in Germany’s underground?
"Of course we did! Marc bought issue 5 in Bremen at a DEICIDE show in 1995 directly from Frank and some months ago he bought the book which includes all issues. To me it was the best and most professional fanzine in Germany ever. It’s my honest opinion, I’m not saying these nice words because I’m doing an interview with this magazine right now, hahaha." 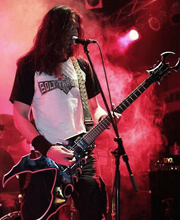 Is the visual aspect important for the band? Do you pay much attention to the look of the band? Can you tell what sort of merchandise WEAK ASIDE has?
"Concerning the cover and the layout of our new album the visual aspect is very important to us as we want to present a nice looking Death Metal package to our fans. Regarding the look of the band we don’t really think about it that much. Normally it is clear for each one of us not to go on stage with pink trousers and a lime-green tanktop, haha. We like to keep our merchandise simple. We personally like black shirts with white print. Also, the print shouldn’t be too big. Often just the logo is enough."

On the level of promotion, how much internet helps to spread the word about your band? How did you get the deal with F.D.A. Records, currently one of the most important Death Metal labels in Germany?
"The internet is really a great help for us to increase our popularity. There are still people reading the good old print magazines but in times of Facebook and co. lots of Metal fans tend to use the internet as a medium to inform themselves about what is going on in the Metal scene. Actually, this happened incidentally. In the beginning of 2013 we had recorded a 3-track demo. Frank Albrecht (at that time still Rock Hard magazine) wrote a review about it and mentioned that F.D.A. Records would fit perfectly as a label and that’s how things got started."

Your lyrics are totally war influenced. How much personally are you interested in war themes?
"Each band member is very much interested in history, especially history of the 20th Century. But we are not experts who can list all tanks which fought in World War II or something like that. I think what makes the war topic so extremely interesting is the fact that you can’t really explain why people didn’t learn anything from the past and make the same mistakes again and again. It seems that differences at some point nearly always lead to war or violence. That’s the reason why we write lyrics like we do. I see our lyrics in the tradition of Grind- or Crustcore bands. You will not find any political message in them but we just scream things which are shit into people’s faces. And I think there is no need to argue about war always being a big fuck-up."

Well, that’s about it, thank you for your time answering these questions, feel free to add anything!
"First of all, thanks to you and greetings to Frank Stöver! By the time your readers get to see this they will hopefully be listening to our new album, banging their heads off! Hope to see you at one of our rare shows! Cheerz! Tom."