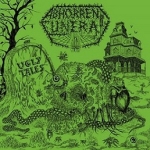 ABHORRENT FUNERAL is a young horror-inspired Death Metal band from Poland, active since 2015. “Ugly Tales” is their first full length album, originally self-released in digital format in 2017 and now re-released in CD format by the Polish label Fallen Temple (limited to 500 copies). On their flyers they describe themselves as: “Troglodytic horror Death / Doom / Punk, inspired by HELLHAMMER, MASTER, CIANIDE, COFFINS, SIX FEET UNDER, AUTOPSY, ABSCESS, NECROPHAGIA, MISFITS, IMPETIGO and 80s Scandinavian Crust”. I partly agree with this statement, but it doesn’t mean that this is a good album. ABHORRENT FUNERAL sound to me like a raw and minimalist Death Metal band with a bunch of very simple and basic compositions. Here we have a festival of very easy power chords. It’s not enough playing at 40 bpm to sound like AUTOPSY, not even playing D-Beat style Death Metal to be the new MASTER or being influenced by horror movies to take the throne of NECROPHAGIA. The style of these Polish guys is a costant alternation of doomy parts and D-Beat tempos, all played in a very punkish way à la EAT MY FUK. To me their musical approach is very reminiscent of the German godfathers of Porno Grind: GUT. The problem is that GUT invented a musical style (you can like it or not), whereas ABHORRENT FUNERAL are just one of the latest modern bands trying to copy the big names from the past: nothing else. The songwriting is pretty boring, mediocre and uninspired, all impoverished by a sloppy drumming. The vocals are average Death Metal growlings with a bit of eco and some screamings here and there, which can in no way be compared with the killer performances of the late Frank "Killjoy" Pucci or Stevo from IMPETIGO. I think that the production is the best point of “Ugly Tales”: pretty raw and obscure, it’s able to give a rotten and putrid feel to the whole album, although I can’t really stand the bucket-like toms sound. Another good point is the cover artwork: a pretty basic but effective horror-inspired drawing. And now let’s talk about one of the weakest point of this album: the concept. Since I’m a die hard fan of horror, gore, splatter, cannibal, mondo, exploitation and giallo flicks, I use to love bands that take inspiration from this kind of movies. Unfortunately ABHORRENT FUNERAL lack originality and a proper method, even when it comes to choose their concept and themes. If you read their song titles, it is clear that the band has been influenced by cult movies such as: “Hellraiser”, “Night Of The Living Dead”, “Virus”, “Friday The 13th”, “Dawn Of The Dead” and “Texas Chainsaw Massacre”, just to name a few. Great movies, there’s no doubt, but when you have to choose some excerpts for the intros, it would be more appropriate to opt for some scenes that haven’t already been used by other bands. I wonder if ABHORRENT FUNERAL have never heard about a band called MORTICIAN, because some of the samples included on “Ugly Tales” have already been taken by this American Death Metal legend. In conclusion, I think that the best way to approach this recording is to listen to it as the demo session of a young band. The potential of their music is still immature, but since this is their first release they can improve for sure their musical style and compositions. More info at: www.facebook.com/abhorrentfuneral, www.facebook.com/fallentemple666