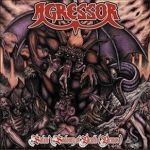 It’s hard to believe that the French cult act AGRESSOR was already making this kind of brutal music back in 1986. Yes, there were already a handful of underground monikers making its homework in terms of brutality around the world (MORBID ANGEL, SADUS, MANTAS / DEATH, PROTECTOR, MESSIAH, SLAUGHTER LORD, OBSCURITY, SARCÓFAGO, NECRODEATH, PENTAGRAM and many more). AGRESSOR, besides MASSACRA and LOUDBLAST, were the most relevant and influential underground Death Metal act coming from France during the 80s and early 90s. So, what we have here is probably a must-have for every maniac into old school Death Metal. “Satan’s Sodomy Of Death (Demos)”, released by Russia’s GrimmDistribution and co-released by Chile’s La Cripta Metal Shop, compiles the first four AGRESSOR demos: “The Merciless Onslaught” (1986), “Satan’s Sodomy” (1987), “Mixed Rehearsal” (1987) and “Orbital Distortion” (1989). Everything is good here, but my favourite stuff comes from their fabulous 1989 demo because of its production. This was released prior to their debut album “Neverending Destiny” (1990), where you can find all the tracks featured on “Orbital Distortion”: ‘Paralytic Disease’, ‘Bloody Corpse’ and ‘Elemental Decay’. “The Merciless Onslaught” shows an unstoppable entity full of energy and aggression while their second demo display some improvement in the band’s identity, a development that will be present in its future releases. The good extra musical thing here is that AGRESSOR was very consistent in terms of keeping the same style and level of aggression over the years. No doubt about this after hearing this sweet compilation. Try to catch a copy as soon as possible because they won’t last long available. Follow the band at www.facebook.com/agressor.fr and GrimmDistribution at social media here www.facebook.com/grimmdistribution. Where to find a copy? Go here www.satanath.com