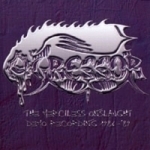 "The Merciless Onslaught" is not a new album by AGRESSOR, furthermore it’s a collection of old demo stuff of the band. This horde has been around since mid of the eighties and I think it’s a cool idea of Deadsun Records to release their classic, hard to get early material again. To those who are not familiar with this South French legion: AGRESSOR plays fast and furious Thrash Metal as it was meant to be and which is heavily influenced by the 80s masters of Thrash like Kreator, Slayer, Sodom etc. Of course don’t expect something new or innovative here (that’s also not the purpose), it’s just straight forward Thrash in its purest form which hits the mark and animates to bang your head. The CD features 11 tracks and includes the 3 songs of their 1989 demo "Orbital Distortion", four cuts of the classic "Satan’s Sodomy" demo from 1987 (all tracks are also known from the split LP / CD together with LOUDBLAST and were also released by Black Mark), the first demo "The Merciless Onslaught" (3 tracks from 1986) and a 1996 demo song (‘The Word Of The Dog’) which was featured on the Black Mark Attack Vol. 1 compilation. Most of the tracks are played with relentless speed and reflecting very well the violence and aggression of the glorious days of Thrash. Only the ‘The Word Of The Dog’ tune showing AGRESSOR in another musical direction as this song is quite slow / mid tempo, more technical and it doesn’t convince me really. The sound quality is quite good especially when you consider when these demos were recorded. It’s a cool underground sound, not perfect (people who are into tape trading and underground stuff know what I mean), so don’t expect some overproduced sound here. The booklet is small (just a 4 page inlayer) but effective with some old photo shots, the demo covers and a liner note by AGRESSOR’s mastermind Alex Colin-Tocquaine. The CD is worth a purchase for all those Thrashers out there who missed the old AGRESSOR stuff, to underground maniacs who like to have the stuff in a better quality than the already suffering tapes or to people who just want to have a enjoyable piece of Thrash. Contact: http://membres.lycos.fr/deadsun, email: gurkkhas@aol.com.