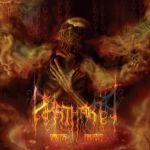 This review is being written on the brightest day of the year – summer solstice, the perfect moment to listen to such an abomination as AKATHARTA, a band embracing the roots of Death Doom, just to pulverise it with a light and elegant sprinkle of Funeral Doom, summer music, ohh yes. The band is a quite new entity out of Florida, USA, lead by the notorious growler Kam Lee, which you might have heard of from bands like MANTAS, MASSACRE, BONEGNAWER amd THE GROTESQUERY, one of the legendary growlers, who now is taking the path of heavier than thou Doom. He has teamed up with Aaron Whitsell, Chris Sabbath and Trash Davis, who might be quite unknown in this game, though who knows? One thing is for sure though, they all know how to tune their guitars and bass down to drop D and deliver earthquake-like rumblings. SKEPTICISM and THERGOTHON is mentioned as two of the inspirations for AKATHARTA, though they never go that deep or slowly as those two, most of the material is delivered mid-paced to slow, doomy and heavy, quite mesmerizing, though never as draining for the mind, as the two Finnish bands. "Spiritus Imundus" leans more towards the Death Doom vibe and never becomes too eerie and disturbing, even though AKATHARTA’s material is cloaked in gloomy darkness. To be honest, I haven’t been listening to much of this kind of music, since the heydays of the genre, so I have no clue about, what has been going on or is going on right now, though Kam Lee and fiends are doing a damned good job with convincing us about why we need more Funeral Death Doom in our lives, as the immense power and intensity of this record is high, and it makes you reflect about a thing or two. Well written music delivered with an impact, insanely fitting vocals and a nice production that embosses all features on the album. They have also made a cover version of ‘Dethroned Emperor’ by a little Swiss trio named CELTIC FROST, that kicks pretty much ass as well, and on the dark interwebs, you can also find their version of TWISTED SISTER’s ‘Destroyer’, where Dave Ingram guests, also a quite enjoyable tune, even though it takes the band a tad away from their Funeral Death Doom laden universe. Ride the everlasting astral wings of crimson snow: www.facebook.com/funeraldeathdoom, https://akatharta.bandcamp.com, www.pulverised.net