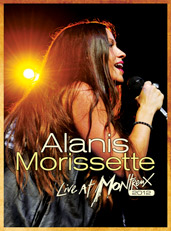 Yeah, I know that a lot of you will think that I’m completely nuts by now and that ALANIS MORISSETTE is nothing but radio friendly Pop and therefore shouldn’t get a mention in Voices From The Darkside… But you would actually be pretty surprised how many die hard Death and Black Metal fans (several Voices staff writers included) actually do worship her in the same way as other non Metal female artists like KATE BUSH, DIAMANDA GALÁS, TORI AMOS, LISA GERRARD, ENYA or SARAH MCLACHLAN (to name just a few of them here). Ok, from all of them our dear ALANIS is without any doubt the most commercial one, considering the fact that she’s already sold more than 60 million albums and won 7 Grammys over the last couple of years… But does that make her a bad artist? Definitely not! I personally have been an addict of her music for almost 17 years by now (with no less than 57 releases in my collection) and even though her songs have become less angry and a lot more relaxed nowadays, they still manage to send shivers down my spine in the same way. And in a live environment they still work perfectly anyway, especially if you hear them in combination with the material from her previous releases. The setlist of the "Live In Montreux 2012" DVD (which was also released as a CD with a shortened setlist) is a solid proof for that. When the show originally took place (July 02, 2012), ALANIS’ new album "Havoc And Bright Lights" wasn’t even released yet, but 4 of the songs, as well as the non album (soundtrack) song ‘I Remain’ already appeared in the setlist and still worked extremely well. So, it’s the overall musical diversity that makes this show a winner in the end. The musicians that backed her up on this tour are probably the most skilled ones ALANIS ever worked with, but they unfortunately seem to feel more comfortable in a studio as their stage appearance is far away from the energy that the "Jagged Little Pill" touring line-up still used to set free on stage. But in the end it doesn’t really matter anyway, since the focus is (of course) on ALANIS and she obviously was in a very good mood on that particular night (emotionally and musically). The sound is clear and the light is great (very moody and often in dark blue) and as usual, ‘Ironic’ gets the best crowd reaction, when the audience takes over most of the singing, but to see ALANIS headbang in ‘Numb’ is equally cool for sure. Still kinda weird though, that this show was recorded at a Jazz Festival… because to me ALANIS is as much Jazz as she is Death or Black Metal. www.alanis.com, www.eagle-rock.com