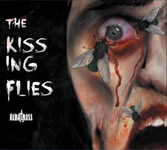 ALBATROSS from Mumbai, India and VESTAL CLARET from Hamden, U.S.A.: two excellent and unique sounding Heavy Metal bands from two totally different continents in the very same package. That’s exactly what you are going to get if you are ever going to purchase this split of these 2 bands for your own music collection. ALBATROSS has been around since 2008, and the band’s first – in 2010 released EP titled "Dinner Is You", was a concept EP about cannibalism and the Kuru disease, seemed to put the band on the local map (to say the least) of Heavy Metal for good. Their part off this split release, "The Kissing Flies", only strengthens positively a vision about this very talented and versatile sounding act even more. All the progressiveness and some captivating psychedelic vibes that they have fused into their songs, surely help them also to get the band’s name melted deeper into people’s brains. Vocalist Biprorshee Das is amazing, being able to use his voice just the way he wants to. Especially those screams simply always tend to send cold shivers down my neck, every time he decides to scream like a damn lunatic. Some vocal help and / or contribution also comes from Niklas Stalvind (WOLF) and The Demonstealer (DEMONIC RESURRECTION), which both add their own little welcome nuances into this already very pleasing wholeness. American VESTAL CLARET has only one song on this split release, which has been broken down into 3 main sections; the song ‘Black Priest’ lasting over 17 minutes all in all. Musically VESTAL CLARET trust dark and melancholic atmospheres more than anything else in ‘Black Priest’, accompanied by Philip Swanson’s (also in BRITON RITES, etc.) always incredible skills to express himself often in a somewhat dramatic way, vocally. VESTAL CLARET clearly draws its main influence from some of those most eerie and heaviest moments of BLACK SABBATH, adjusting these particular elements to work nicely within their stuff they perform. Mind-tickling, SABBATH-ian doomy Heavy Metal at its purest and most majestic form – you just gotta love it as much I do. In summa summarum, you not only get one but two amazing bands by just the first strike. Now isn’t that marvelous, eh? ALBATROSS: www.facebook.com/albatrossindia, VESTAL CLARET: www.facebook.com/vestalclaret, contacting Roadcrew Records, email them: roadcrew.records@gmail.com