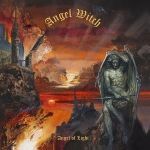 If it’s true – as Lemmy said – that good music can save a soul. The new album from the British dinosaurs ANGEL WITCH will surely save the souls of many fans of traditional Heavy Metal. “Angel Of Light” is the fifth full length album of this iconic act that was born in 1976 and that undoubtedly reigns in the pantheon of Heavy Metal. Eight songs for almost 48 minutes of pure Heavy Metal: the way it should be played. Recently released by Metal Blade Records, “Angel Of Light” is a journey into the past where the NWOBHM has its roots. Ok, if you don’t know who ANGEL WITCH are, you’re a poser. Anyway, if I have to make a comparison, imagine a mixture of the first two IRON MAIDEN albums, BLACK SABBATH, WITCHFINDER GENERAL and MANILLA ROAD, which means old school Epic Heavy Metal with some Doom parts. The only survivor of the original line-up is Kevin Heybourne with his melancholic and powerful vocals; whereas the rest of the band is formed by new and talented members. To me “Angel Of Light” is the worthy heir of their comeback on the scene from seven years ago “As Above, So Below”; it doesn’t reach the standards of this latter and certainly not those of their legendary debut album, but it’s for sure a solid release. Here we have tons of addicting and galloping Heavy Metal riffs, alternated with some atmospheric slowdowns in the vein of CATHEDRAL and CANDLEMASS, that are able to give to the compositions an aura of despair. Is “Angel Of Light” a masterpiece? No, it isn’t, but for sure this album sweeps away all the IRON MAIDEN releases of the last 30-35 years. Listening to “Angel Of Light”, I’ve only found two uninspired songs out of a total of eight and they are ‘We’re Damned’ and ‘Condemned’. The rest of the album is pure gold: a symphony for my ears and a perfect example of classic Heavy Metal that could fit perfectly in the tracklists of albums such as “Killers” or “Angel Witch”. ‘The Night Is Calling’ and ‘Don’t Turn Your Back’ represent the first official studio recording sessions of two songs the band used to play live in the 80s and which were previously available only on bootlegs. ‘The Night Is Calling’ is the most epic song of the album, enriched by an outstanding arpeggio. In terms of sound production “Angel Of Light” is good but not perfect, due to a mixing session in which the drums (the snare is killer) are a bit too high and at times the beats and the cymbals cover both the guitars and the vocal parts. Last but not least, this album can also boast a fantastic front cover artwork with an infernal and incandescent lava field pretty reminescent of the painting “Pandemonium” by John Martin from 1861. In conclusion, if you’re into traditional Heavy Metal, this album is a mandatory addition to your collection. Buy it without hesitation! www.facebook.com/angelwitchofficial, www.metalblade.com