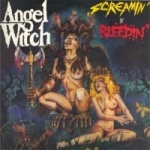 IRON MAIDEN’s Steve Harris once said in an interview that ANGEL WITCH probably never made it real big because of their bad management (which was basically Kevin Heybourne’s father in the early days), while others probably blame it on this particular record. When “Screamin’ ‘N’ Bleedin'” originally came out almost twenty years ago, the band had the difficult task to deliver a worthy (if not better) follow up to the incredible self-titled debut album on Bronze Records. In other words, they were destined to fail right from the beginning! The legendary three-piece (who had even broken up for a while in between these two records) returned to the scene with a slightly changed line-up (mistake number one?). Original bass player Kevin Riddles (who went on to form TYTAN) got replaced by Pete Gordelier and Dave Tattum was hired as the new frontman for the band, probably to give Heybourne the necessary freedom to focus on his guitar playing exclusively (just a guess, so don’t quote me on that). As a result the material on “Screamin’ ‘N’ Bleedin'” of course turned out a little different and more melodic (mistake number two?). And the fact that it got released on a rather unknown label (Killerwatt Records) obviously didn’t help the band either. But in retrospect I must say that all the bad press it received back then was not necessarily justified, because “Screamin’ ‘N’ Bleedin'” is definitely not a bad record! If you still like the typical NWOBHM sound, ignore the big shadow of the debut album and furthermore have no problems with bands that deliver big harmonies and catchy melodies (without sounding cheesy in that!), “Screamin’ ‘N’ Bleedin'” is a worthy purchase nevertheless! Fellow Metalheads SATAN had a similar problem when they decided to follow-up “Court In The Act” with (BLIND FURY’s) “Out Of Reach”, which is not a bad record either (if you listen to it nowadays)… Anyway, the “Screamin’ ‘N’ Bleedin'” CD re-issue (first time on CD ever!) comes with a new coverart (unfortunately) and three additional live bonus tracks (‘Frontal Assault’, ‘Screamin’ ‘N’ Bleedin” and ‘Straight From Hell’) from a show in Ridderkerk, Holland from 1986 (featuring Kevin himself on vocals!). Soundwise not more than average, but from a historical point of view still highly interesting. The regular ten album songs offer classic British Metal of the late 70s / early 80s, perfectly composed around Tattum’s clean, melodic voice. His way of singing is actually not too far away from Kevin’s style (who’s also doing some additional lead vocals on this album) and should easily appeal to everyone into similar rooted acts, such as AVENGER (UK), BLIND FURY, BLITZKRIEG and the likes. Lots of great guitar work as well as a bunch of excellent tunes should be proof enough that this album is way better than everyone always considered it! The CD booklet comes up with three full coloured live pics as well as some black and white in the studio shots, but unfortunately is lacking in the lyrics though. All in all this is a very cool re-issue, so get your fingers crossed that Archaic Temple’s plans to re-issue album number three as well (“Frontal Assault”) will turn into reality soon! If you have trouble in finding a copy of “Screamin’ ‘N’ Bleedin'”, contact Iron Pegasus Records (www.iron-pegasus.com), who exclusively distribute it.