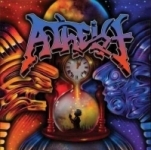 I could’ve wished for a couple of tracks from the last album they did in the 90s, simply because it holds a couple of good tunes, despite the fact that "Piece Of Time" and the titanic "Unquestionable Presence" are tide-waves ahead of "Elements" when it comes down to quality. But one cannot really argue when they play these tracks: ‘Unquestionable Presence’, ‘On They Slay’, ‘Unholy War’, ‘Your Life’s Retribution’, ‘An Incarnation’s Dream’, ‘Mother Man’, ‘And The Psychic Saw’ and ‘Piece Of Time’? Of course you can’t. You can wish for another set, a longer set… But take this as it is, namely a witness of a band that should’ve continued their saga in the 90s. Enough of this nostalgia that doesn’t lead anywhere. "Live At Wacken" has a surprisingly good sound and you can hear the details, the unique basslines, the melodies, Flynn’s insane drumming and Schaefer’s distinct vocal… What more can you ask for? Included in this package is a "best of…" and it holds songs from all three albums. Personally that doesn’t give me anything since I already own all three albums and I think no album is complete without the rest of the songs. But for new potential fans, this live / best of release is definitely worth a purchase. Go get it and get your dose of intelligent technical Death Metal definitely ahead of its time! www.relapse.com.