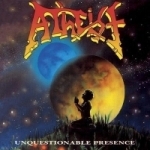 While the former “Piece Of Time” was an album that forced only good songs with a lot of varied song-structures and strange rhythm passages, “Unquestionable Presence” was the album that took this to an even higher level. ATHEIST’s musicianship was even closer to perfect. Every beat on the drum feels right in place, every wicked guitar-riff and melody feels completely natural and Tony Choy’s basslines were out of this world. Roger Patterson, the original bassist, died prior to this recording, and Choy’s bass duties pay homage to Patterson’s writing. It’s like, did Choy’s fingers really survive the torture of hitting every string at the same time, yet bringing the melodies that lifted the already perfect songs. Here and there you may feel that there are four musicians heading in every direction. Flynn’s drumming is at times jazzy, and if I hadn’t seen the photos I am sure ATHEIST had a spider for a drummer. Varied, soft, hard – everything. Some may accuse ATHEIST for not writing songs, they just melted all kind of melodies together. Well, I beg to differ because if you give the songs time to breathe and the instruments time to assimilate to your familiar musical likings, you easily recognize each track in the jungle of riffs. Ok, in every track there are enough riffs to make full albums, but still every track has its own trademark. ‘Mother Man’ begins with a dreaming short section that rapidly turns into a bassist’s wet dream. And this track is different in the riffing but similar in the lack of structure compared to the rest of the album. Simply said, there is not set structure, each track evolves and bring in new elements, yet it is still easily recognized as ATHEIST. We get melodies that stick to your mind, such as in the massive closer ‘And The Psychic Saw’. Listen to the short section around 30 seconds. Here you can see how guitars and one bass talk to each other, accompanied by intelligent drumming. In my favourite ATHEIST track ‘An Incarnation’s Dream’, the band is at its peak. They open with a calm section that allows you to breathe and prepare for the upcoming musical orgy. ATHEIST also shows us how to arrange a track with numerous breaks, loops and turns yet keeping the pace. The song moves for forward all the time, and it contains one of my absolute favourite parts in music ever. The guitars and the drums actually speak to each other for a few seconds before the guitar evolves into a solo and then back to the talking. “Hey guitars, you’re having a great day?” the drum ask. “Oh for sure, we’re feeling just so good today, giving my best to comfort our common friend, the bass”, the guitars replied and looked at the bass. The bass was new and didn’t know what to think, and was afraid it would stand back compared to the now dead bass that used to hang out with the guitars and the drums. The guitars comforted the bass and said to him that he shouldn’t worry. “You’re doing a great job. Just do your own thing, and I’m sure it’ll work out fine”. And with Kelly Schaefer’s original voice, raspy and surprisingly clear, ATHEIST delivered an album whose presence remains unquestionable. A masterpiece of intelligent music that sounds even better than it did 14 years ago, and that is a necessary item in every Metal collection. A preproduction demo to the album is included, showing us five out of eight tracks. It’s cool to hear them in different packaging, and they are surprisingly strong. Schaefer’s vocal may not be up to par, but still these tracks are worthwhile, no doubt. ‘Retribution’ and ‘Brains’ are instrumentals, and can be considered as a guide to ATHEIST’s musicianship if you don’t want Shaefer’s dry vocal on top. As a super-bonus we get ‘Enthralled In Essence’ which included Patterson’s basslines. An excellent homage to Patterson, despite the somewhat dirty sound on the take. In addition to all this, we get ‘Mother Man’ and ‘And The Psychic Saw’ as instrumental, the first one including only drums and bass, while the latter the guitars and drums. Altogether this package consists of worthwhile tracks that add to the already super album.