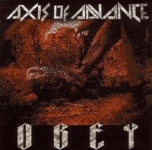 Trying to define the music played by AXIS OF ADVANCE is an almost impossible task, so much this Canadian three piece have developed a highly personal style which defies any categorization. With this third album, AXIS OF ADVANCE have basically kept the style that made their two previous efforts (“Strike” and “The List”) so enjoyable. Expect once again a strange brand of Death / Black Metal, rooted in the past while being futuristic at the same time; I know this may sound like a paradox, but it is the way I feel this music anyway. To clear the things up, let’s say that without using any fancy “experimental” device or element (like trendy samples, badly played keyboards, or “cyber” paraphernalia), AXIS OF ADVANCE have instilled a quite disturbing atmosphere, both musically and lyrically, into this disc. AXIS OF ADVANCE War Metal announces grim times to come, the final battle which could well engulf the earth into a vortex of perdition because of a sadistic dictatorial manipulation of mankind leading us to war and destruction. No wonder then that the music on “Obey” is nothing but a cyclone of violence and hate: each of the tracks shows intricacy, adventurous tempochanges (emphasized by the insane drumming of J. Read, once again featured as a “session” member, but he was so referred to since the very beginning of AXIS OF ADVANCE existence, so I suppose he is a permanent member now?), perfect musical mastery and insanely hateful vocals spat as deadly black venom. The production was handled at the famous Berno Studio in Sweden, so you can expect an excellent overall sound, yet put in the service of the music. From time to time, the guitar sounds like at the time of the very first wave of Swedish Death Metal bands in the beginning of the 90s; this is a new element in the AXIS OF ADVANCE music, and quite unusual and fresh considering that the band’s style has nothing in common with this. My only complaint regarding “Obey” is that it appears too much carefully planned and cold instead of being spontaneous, like “Strike” and “The List” were. Nevertheless, this album is way above the current production in extreme Metal, and should be present in the collection of any serious Metalhead. Obey AXIS OF ADVANCE and get this one urgently, and the rest of their discography as well! Excellent!