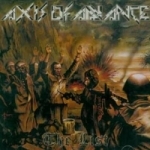 The US is fucking raging, no doubt about that, after the new THORNSPAWN, ARGHOSLENT, ANWYL and GRAND BELIAL’s KEY albums there’s another Black / Death / Thrash assault that should satisfy any fan of apocalyptic and chaotic soundscapes! AXIS OF ADVANCE, one of many bands James Read (also CONQUEROR, REVENGE) participates in, attack with a faster, more brutal version of ORDER FROM CHAOS (especially the vocals remind me of Pete Helmkamp) and… well… leave nothing but dead bodies behind!!! The sound is raw, hectic, violent and fits good to this type of music. There are some slower, sometimes even doomy parts here and there on “The List” and they assure that the whole thing does not get boring, see the beginning of ‘Sacrifice’. A song like ‘The Torture’ is rhythmically and vocally a perfect tribute to ORDER FROM CHAOS and it is cool that AXIS OF ADVANCE honor this cult-act!!! On the LP version, as usual limited on 500 hellish copies, you will discover another tribute, this time it is a cover version of DEATHSTRIKE’s ‘Pay To Die’, which I would have loved to hear as well, but damn, it’s not on that fucking promo. But anyway, “The List” is a manifest of raw feeling and aggression and anyone who praises the bands I mentioned above, like I do, should check this one out!!! For more information and a link to AXIS OF ADVANCE’s website, surf to www.osmoseproductions.com.