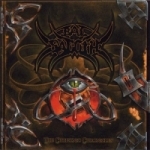 Just when you thought that this battle-band couldn’t take their music any further, but rather push the autopilot-button and do another BAL-SAGOTH album, these fine English gentlemen deliver an album of epic proportions. When I as a listener and reviewer choose to give this album a score that needs auxiliary explanations, it’s not a choice of praise but rather of respect. I respect BAL-SAGOTH for staying true to their roots and to their identity. And I deeply respect them for their everlasting quest to improve their music when I thought they could advance no more. "The Chthonic Chronicles" is an album that needs numerous listenings, preferably in headphones. There are just so many details that are easily lost if you don’t pay 100% attention to the magic that’s arranged behind the wall of sound. BAL-SAGOTH plays music that drives you to such thoughts as "where’s my armour?", "give me my sword!", "saddle my horse!"… In short, it’s battle magic. And if you, as a listener, do not strive for letting the atmosphere take you to distant places, you can pay close attention to the music solely, since there are many different aspects to satisfy your focus all the time. Byron’s whispers, his hoarse vocals and the majestic voice are three components that are utterly important when the band creates the atmosphere. This time it feels like they’ve worked A LOT with the arrangement of the vocalization, like where to Black Metalize them, where to go majestic and where to let the music do the talking. And he varies his voice a lot. Towards the end of ‘Invocations Beyond The Outer-World Night’ he’s going bananas, with every sentence being sung / talked / whispered differently compared to the previous. Still it feels natural. There’s not a single sentence where I feel Byron should’ve screamed, talked or whatsoever, in another way compared to what is done. The music, traditionally composed by the Maudling brothers I suppose, is genuine work…, at least if you’re as fascinated by the BAL-SAGOTH world as I am. Variation, details, mighty keyboards and such a drive! When other bands can afford real orchestration, BAL-SAGOTH uses the means they have and they do it to such an extent that I’m not thinking real orchestra for a mere second. Instead of doing what many fans of extreme Metal demands, BAL-SAGOTH thinks otherwise and increases the amount to more or less ridiculous heights. There’s no rest for the wicked, and this is what makes BAL-SAGOTH standing tall above all others making music akin to these English lads. Just listen to the last 30 seconds of ‘The Obsidian Crown Unbound’… The band has four instrumental pieces, with the intro named ‘The Sixth Adulation Of His Chthonic Majesty’ being the best. And again it’s easy to hear that they play the keys instead of trying to make it sound like some sort of classical piece. BAL-SAGOTH accepts that keyboards are used, and the band uses it for all its worth. If I must criticize something, it has to be the final instrumental. It takes away some of the major impact from the ending of ‘Beneath The Crimson Vaults Of Cydonia’. I’d preferred if the album contained 11 tracks instead of 12, skipping ‘Return To Hatheg-Kla’. But, this is a minor thing, and there’s nothing else I can criticise on "The Chthonic Chronicles". Believe me, I have tried to find flaws. But every single time I feel that the music should change, vary, take a new direction or just end, BAL-SAGOTH grants my desire. There are many highlights on this album, besides it being a highlight in itself, and I must especially mention the 7th song on the album named ‘The Hammer Of The Emperor’. It begins with a warlike introduction, before changing into midpaced rhythms that floats natural from the introduction. The keyboards melody around 3.10 to 3.20 is humorous and dresses the music like nudity dresses Jennifer Lopes. But it’s the turn after 4.35 minutes that makes me shiver in awe. The way BAL-SAGOTH transcribes from one section to another is marvellous. And I’m not listening to the music anymore, I’m feeling it. "The Chthonic Chronicles" is an album that took me by surprise, being darker and heavier that I would ever imagine, and it leaves me with a desire to hear it again… and again… and again… and again… and again… AND AGAIN! Website: www.bal-sagoth.co.uk.