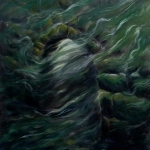 To be honest, when bands name their songs with one-word titles, it’s sometimes difficult to remember each track. But in the case of BARÚS, this is simply not true. After three years from forming, the band have released their first full-length (after 2015’s self-titled EP) entitled "Drowned". Though having a different sound than GOJIRA, both French bands remind me of each other. Both write powerful songs with progressive elements in places, and a little brutality in others, while maintaining a melodic atmosphere throughout. The first track ‘Descry’ wastes no time of getting into the progressive Death Metal flow with spiraling guitars and throaty vocals that succumb to clean shouts that make their appearance in between growls. About halfway through the track, a doomy resonance intrudes, slowing things down to a snail’s pace before erupting into furious waves around the 4-minute mark. The bass guitar at the beginning of ‘Graze’ keeps a steady line of protruding darkness as the guitars seem to signal the oncoming storm. The emotion in the song is very prevalent and enraptures the listener, setting up the quicker-paced ‘Engorge’. Though, after a while, the blasting sounds settle down into a jazzy ripple of watery goodness that distract a little bit before thundering into an even more monstrous track than it began with. ‘Amass’ is an atmospheric soundtrack… an interlude… giving us all a breather until the heavy, crunching ‘Dissever’ grabs hold of our throat and crushes our larynx. The vocals are different, sounding like a mad tyrant shouting for the heads of his enemies. ‘Vitiate’ is another powerhouse, leading to ‘Benumb’, which is actually quite numbing to the senses. Unfortunately, this and ‘Amass’ tend to crush the flow of the album. Most Metal fans need a constant mass of chaotic sound which we can bang our heads to. A mistake made by quite a few bands are when the stampede is interrupted by experimentation. These types of tracks work best as intros or outros. The next track ‘Perpetrate’ sounds like a swarm of angry bees waiting for the moment to attack. The buzzing guitars and vocal outbursts lend a hand in bringing anxiety into the mix, which is a good thing. The final track ‘Forsake’ is a melodic, sort of technical Death amalgamation to remind the listener what BARÚS are capable of. Outside of the ambient tracks, "Drowned" is an impressive first album. The anonymity of the band members makes me wonder if they’ve had more practice sharpening their sound than only one album allows. Whoever they are, here’s hoping to more music in the future. For more information, check out: www.facebook.com/barusband, www.memento-mori.es