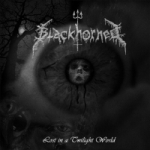 Dark days are ahead… yes, dark days… days in where a new Black Metal album is released and it all sounds the same… and although I am one of dark soul, thus not that many music of that style sparks fire into my eyes… until the position of the stars is correct, something evil and truly dangerous will rise that will ignite fire, fury and darkness upon mankind… enter then the BLACKHORNED…a one man band… yes, I say band… only one sulphurous soul is destined to create this wicked and morbid hymns of thrashing blackness found within… he who also performed in many other acts, such as VICTIMIZER… this being actually their third invocation and surpassing a lot by their other two previous attacks… the style might have remained the same more or less, but the way it is performed and the passion you can hear coming out from the speakers makes this to be one of those lost jewels that deserves to be heralded more than those copy-clones with no (black) soul… and here, where I mean Thrash, I do not mean a mere re-hash of KREATOR or SLAYER riffs… no, it goes deeper… it has that traditional Heavy Metal approach that turned into Thrash if you know what I mean… at times, it does invokes the sound of early ROTTING CHRIST like in the song ‘Dungeons Of Death’ with a simple-yet hypnotic riff-o-rama of highest proportions and a subtle use of keyboards. It also reminds me more than once to old Death / Doom Metal bands, specifically those from the Dutch lands, like BEYOND BELIEF or CASTLE. The vocals are more into the Black Metal territory although there are more than a certain good Death Metal touches in there. Production wise, they have achieved something that I would say is the perfect level; not exactly overproduced, neither too raw to sound like a demo. The guitar is up-front and heavy, while the rhythmic section does its job in a very efficient way, if maybe, I would have wished for a brighter drum sound, but then again black spells casted with such force are usually dirty as much as furious. Songs like ‘Embraced By Shadows’ are truly representative of this diabolic entity, which showcases a traditional Black Metal approach à la DARKTHRONE, yet with a very personal touch, and here the band is not afraid of adding some wicked melody but sounding still evil and triumphant, a goal many similar bands try but fail in misery. Yes, I have been vastly graced by this third effort, this showcases a savage dedication and a natural progression which shows that dark side of our nature is not in fight with creativity and musical wisdom; they are in fact complements that only a few worthy possess to create music of this dark and high caliber. It will be wise to get a hold of their previous efforts, but more than mandatory for those trying to mastery the dark arts to get this at all costs. This kind of releases is of those that make the underground Metal to be still a place where treasures are to be found for those who dare to search beyond what the eyes and ears can see. I will be listening to this a lot in the time to come. Yes, the stars are in the right position now… Cthulu is being invoked… BLACKHORNED is the music that will serve as the key to open the gates… www.undercover-records.de, www.myspace.com/blackhorned