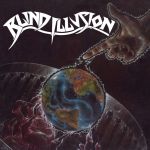 Hailing from San Francisco, California, BLIND ILLUSION’s debut album is, without a doubt, a classic in every way possible. Yes, they are not as big as other Thrash acts from the golden 80s (SLAYER, EXODUS, KREATOR, and so on). Still, they deserve much more attention. Originally released under Combat Records, this one is not the average Thrash album from the late 80s, as many acts used to write. BLIND ILLUSION offers some complex, creative, eclectic, innovative, but heavy stuff. Formed back in 1978, they released a handful of demo tapes during the 80s. Ten years after their inception, they managed to record and release “The Sane Asylum.” And well, more than 30 years of its original release date, it’s available again on vinyl and CD, thanks to Hammerheart Records. The music here is advanced in composition and originality. Their approach to Thrash Metal can be compared to CORONER, VOIVOD or MEKONG DELTA. For the current sounding standards, this could sound old-fashioned. It is not bad at all, it is the kind of production I enjoy the most! In case you did not know, people like Les Claypool (PRIMUS), Larry Lalonde (POSSESSED, PRIMUS) and even Kirk Hammett (METALLICA) were involved in the production of this classic album. ‘The Sane Asylum’ is a short track that works as an introduction to what is to come. Then follows ‘Blood Shower’ (excellent chorus and guitar solos), ‘Vengeance Is Mine’ (the intro is memorable, and you will find some of the most brutal riffs in the entire album, maybe I’m wrong, but the vocals here are strongly inspired on Jeff Becerra’s style – pay attention from the minute 1:20 onwards) and ‘Death Noise’ (probably the most experimental here). ‘Smash The Crystal’ and ‘Metamorphosis Of A Monster’ are my favourites. “The Sane Asylum” is not the classic super-fast or hyper-brutal stuff from the late 80s. Still, if you consider yourself a true old school Metal maniac, it deserves your praise. Here is some trivia to close this review: “The Sane Asylum” was dedicated to the “lives, memories, and spirits” – as you can read on the original Combat vinyl pressing from 1988 – of Cliff Burton and John Lennon, among others. Catch a copy before it is too late! BLIND ILLUSION is on social media: www.facebook.com/officialblindillusion. Hammerheart Records can be tracked right here www.facebook.com/hammerheartrecords.