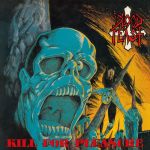 Does this band really need an introduction? Ok, in case you need one… BLOOD FEAST is an American Thrash Metal band that is around for quite some time already. Formed in 1985 as BLOOD LUST, their moniker changed into BLOOD FEAST a year later. They stayed active until 1991, a period in which two albums, "Kill For Pleasure" (1987) and "Chopping Block Blues" (1989) and the EP "Face Fate" (in 1987) were released. After that, the band disbanded but was resurrected in 2007 again. This year (2017) a brand new album called "The Future State Of Wicked" was released. The year "Kill For Pleasure" was released can be seen as the birth year of the first wave of Death Metal. Despite the brutality, which makes it hard to draw the line between Thrash and Death Metal (look in the details), the focus is on brutality and speed, but it all lies in the framework of Thrash Metal. The production is bad, even though it was newly mastered in November 2015 at Temple Of Disharmony studio by Patrick W. Engel. The drums still sound like cans, the bass is hard to find and the guitars miss heaviness. The vocals by Gary Markovitch are cool and reminded somewhere of KREATOR’s Ventor with some bursts like Paul Baloff. They’re probably the best thing on this album. The drums by Kevin Kuzma are relentless, but miss any rolls or dynamics. The riffs from Adam Tranquilli and Mike Basden are ok, but don’t really stick. Something that’s also a problem with most of today’s Thrash worship acts, but that’s another story and has nothing to do with this release. But they miss the catchiness and diabolic class to last for years, let alone a listen. The album is brutal and fast, but not a classic. At times there are moments of class like in ‘The Evil’ and the intense ‘Venomous Death’ and ‘R.I.P.’ In the end the songs are not special enough, especially compared to the classics from this era, not only the ones from the US. It’s more or less of the same caliber as "Spectrum Of Death" by MORBID SAINT. This version, released on High Roller Records, a label that’s specialised in past releases, also includes the EP "Face Fate" which contains 4 tracks. Two of the debut and two new ones. In case you’re addicted to Thrash Metal from this period, you probably need this one in your collection. Check and judge yourself. More info at: www.drinktheblood.com, www.facebook.com/bloodfeastlegions, www.hrrecords.de