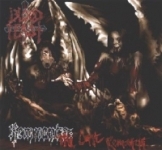 If you have checked out our massive interview feature on this classic 80s Thrash act from New Jersey you should already be aware of every little detail concerning BLOOD FEAST’s history, so we can exclusively focus on this eleven song release here. Unfortunately "Remnants: The Last Remains" is not a new studio album by the band, but a collection of rare and / or hard to find recordings of the former New Renaissance Records recording artists, quite obviously destined to satisfy the needs of their die hard following in the first place. The disc kicks off with their classic "Suicidal Mission" demo, which they still released under the BLOOD LUST moniker way back in 1986. Its four raw and aggressive cuts (‘Menacing Thunder’, ‘The Evil’, ‘Blood Lust’ and ‘Suicidal Mission’) all made it onto their debut album "Kill For Pleasure" later on, but are featured in the original versions here, that started it all for the band. Some of you may still remember them as that demo got heavily spread around by tapetrading back in those days. Another two song demo is next (a pre-production recording of the songs ‘Kill For Pleasure’ and ‘Vampire’) and should be a little bit more less known, as it was never officially released before. These were actually the first two songs that the band recorded for their debut album, after having been picked up by New Renaissance Records. Soundwise not necessarily completely convincing, but it’s still cool to hear their evolution this way. If you already own the regular BLOOD FEAST albums the most exciting stuff for you is probably the material which comprises the second half of this CD… There’s three previously unreleased studio recordings (actually the last to feature original guitarist Adam Tranquilli), which were meant to appear on BLOOD FEAST’s never released final album "The Last Remains" (yep, that’s where this compilation’s title is based on). They are far more convincing than most of the stuff which later came out on their "Chopping Block Blues" record, especially the extremely cool ‘Holocaust’ and ‘Curse Of The Womb’. Being an old KISS maniac myself for many many years I’m not too sure what to think of the band’s rather unconventional Thrash Metal version of ‘Black Diamond’, so I better leave that up to each one of you individually here. The album ends with a great live version of ‘Menancing Thunder’, which is – according to the CDs liner notes – their only live recording which doesn’t suffer from a poor sound quality. So, all in all a very interesting compilation to complete BLOOD FEAST’s rather shortlived musical legacy, packaged in a pretty cool Pat Thompson artwork. Label contact: www.militiarecords.com